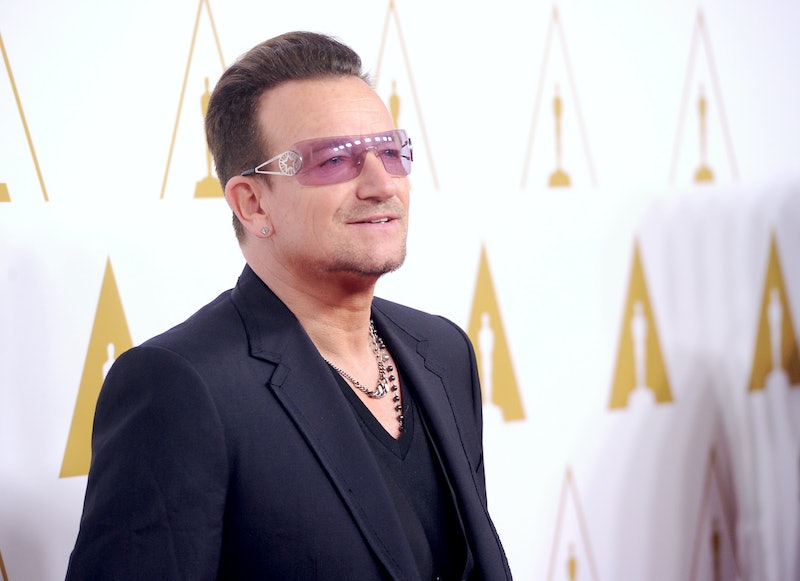 There's a whole lot to absorb in the embarrassment of riches that is Kendrick Lamar's new album DAMN., so I'm here to direct your attention to some of my favorite areas. Like, for example, can we talk about the the lyrics to Kendrick Lamar and U2's song "XXX"? The collaboration might seem surprising at first glance, but the rapper and the rock band actually overlap quite a bit when it comes to activism and speaking truth to power. That comes out clearly in the lyrics, so don't feel like you need to reevaluate your idea of either of these musical acts just yet.

The juxtaposition of U2's interludes with Kendrick Lamar's verses show how understandable the rapper's loss of faith in the system is. Bono introduces the track with:

America, God bless you if it's good to you

Can you help me underst—

At which point, he's interrupted mid-line by Kendrick Lamar, whose voice on the track is the one we should really be listening to. He comes in hard and fast, and the fire in his voice points out how the American experience differs wildly from individual to individual, while his words highlight that the difference is often arbitrary, based solely on your skin color or income level.

Johnny don't wanna go to school no more, no more

Johnny wanna be a rapper like his big cousin

God bless America you know we all love him

Said they killed his only son because of insufficient funds

This surely isn't the same America that Bono is experiencing; their realities occupy the same physical space, but they couldn't be more different. However, the one thing that connects them is that passion and love are the driving forces behind their actions, even when situations devolve into violence.

Tell me what you do for love, loyalty, and passion of

All the memories collected, moments you could never touch

Lamar seems to be longing for a simple life surrounded by the people he loves, removed from the chaos that swirls around him.

I can't even keep the peace, don't you f*ck with one of ours

It be murder in the street, it be bodies in the hour

Ghetto bird on the street, paramedics on the dial

Let somebody touch my momma

Touch my sister, touch my woman

Touch my daddy, touch my niece

Touch my nephew, touch my brother

It's not a place

This country is to be a sound of drum and bass

You close your eyes to look around

With the violence that's described elsewhere in the song, "drum and bass" seem to be a metaphor for the sounds of gunfire. What he's describing isn't a safe place, unless you're a very specific type of person.

With each artist interrupting the other, and being interrupted every time he's trying to make a greater statement about his experience, is it any wonder that Bono and Lamar are singing about losing faith in the system? At times, it can feel like corruption runs down to the country's very core, so ending the song like this feels like a fitting — albeit tragic — nod to the way things are. Or at least, the way Lamar and Bono feel things to be.

It's not a place

This country is to be a sound of drum and bass

You close your eyes to look ar—

More like this
'Traumazine' Has Megan Thee Stallion Twitter Dancing Through Their Feelings
By Grace Wehniainen
'The Capture' Is Finally Back – & S2 Looks Tense AF
By Sophie McEvoy and El Hunt
Gassed Up Promises All Things Action, Risk, & Redemption
By Frances Stewart
The Lionesses Are Calling For Equal Access To Football In Schools
By Sophie McEvoy
Get Even More From Bustle — Sign Up For The Newsletter