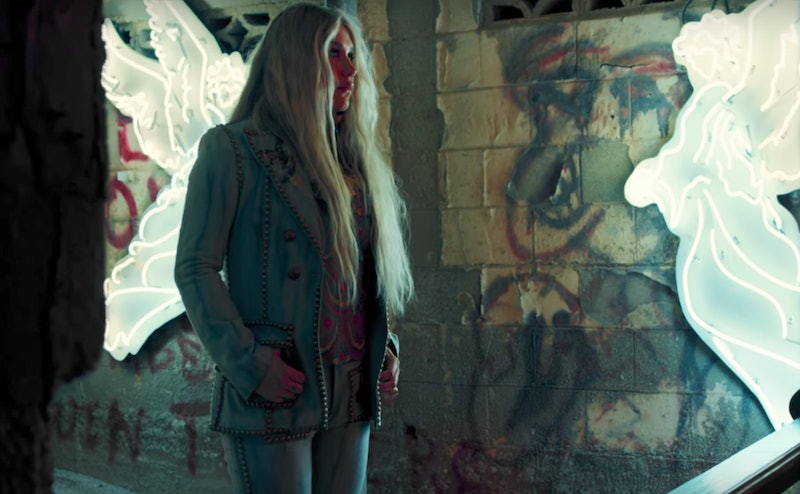 Kesha Rose Sebert stopped by SiriusXM's Hits 1 In Hollywood to discuss her new track, but, more importantly, while there, Kesha explained her inspiration for "Praying." If you've watched the video's powerful intro, in which she demands "Why have I been abandoned by everyone and everything I’ve ever known... what is the lesson, what is the point?", you won't be surprised to learn that she was in a troubled place, mentally, while writing a lot of the music on the new album. While her song is deeply emotional, her conversation about these years of battling with her mental health was pragmatic and down-to-earth about a topic that few stars feel comfortable talking about. As such, one unexpected benefit to listening to the interview is that it comes with some excellent, deeply practical tips on how to cope with depression that anyone can use, even if you're not a world-famous recording artist.

When asked about the intro to her video, she launched into one of the most important pieces of advice you can give anyone with depression — simply to be open about it. She explained:

"I feel like most humans feel that kind of way and it’s taboo or whatever to talk about it but I wrote a song about it, so let’s talk about it. I think it’s healthy to actually talk about feeling really down sometimes because life can be a f*cking b*tch sometimes."

As someone who's gone through her own struggles with depression, I can't stress how right Kesha is on this point. It often feels painful or humiliating to open up about; in my own life, I've come across many people who believe that depression, alongside other mental illnesses, isn't a "real" sickness. When I'm depressed, I lack the energy to battle people on that. But opening up about depression eases the issue. It means that your friends understand when you flake on hanging out at short notice or your partner gets it when you're joyful one moment and completely melancholy the next. It means there's someone around to drag you out of bed when you're going through a dark few weeks.

Kesha had a further piece of concrete wisdom about dealing with the illness, which, according to the Anxiety and Depression Association of America, affects "more than 15 million American adults, or about 6.7 percent of the U.S. population age 18 and older in a given year." She argued that "the beautiful part is you hold onto hope and you keep on going." Specifically, she stated her music saved her. And not in some sort of whimsical, unicorns-and-rainbows way, like listening to a song and suddenly letting the innate joy of life resonate through her. Instead, it's in terms of giving her a routine: "...for me, I would roll out of bed and I would get in the car and drive to the studio and I would just keep making songs and that was my way to cope."

"I just had to keep going and keep showing up for myself and that’s really hard to do when you are feeling depressed, you don’t want to get out of bed, but I think it’s getting up and showing up. But there was never a day when I actually just let myself lie in the bed and not get out of bed."

This part seems vitally important. While it's tempting to isolate yourself, establishing a routine and keeping on going is essential, especially if it means contact with other humans. After all, socializing can boost your mood and fight depression, according to the journal Mind, Mood & Memory. But it's more than just that. A study conducted by the Society of Occupational Medicine in 2008 showed that work can help to improve the symptoms of depression, improving sufferers' self-esteem and giving them a structure and a sense of meaning in life.

Obviously, there are some vital tips here that Kesha doesn't cover; while keeping on truckin' is a smart idea, if things get increasingly dark, it's essential to seek therapy or consider medication. But ultimately, the singer/songwriter covers some of the most important aspects of dealing with such a deadly illness: Admitting you have a problem, both to yourself and others, if you're able to do so. Pushing yourself to keep going, even when getting out of bed feels roughly equivalent to scaling Everest. Putting that hope into action by working on a long-term project.

Sure, getting up and getting dressed and going to work doesn't feel particularly heroic when you're depressed. It feels dreary and empty and small, like everything else. But when you're laboring under a complex health concern for months or years at a time, it's the bravest, hardest thing you can do.