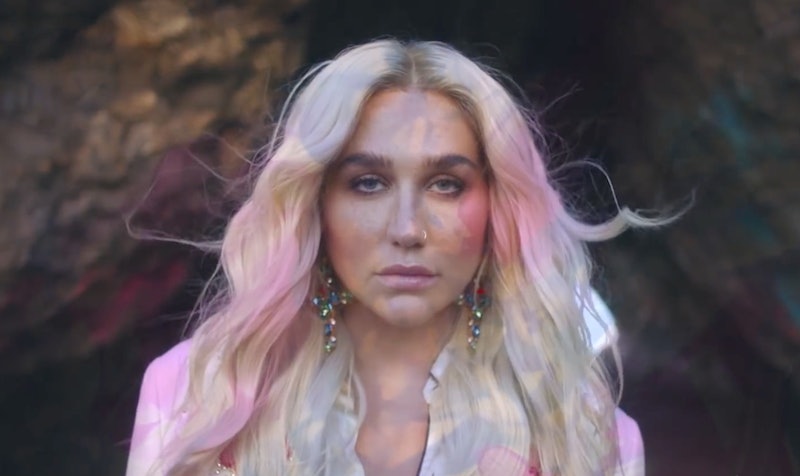 In the new short documentary, Rainbow: The Film, Kesha provides her fans with a behind-the-scenes look at the making of her 2017 album Rainbow. While Kesha's Rainbow documentary shows BTS recording sessions, it also depicts abstract interpretations of the difficulties that the singer faced while struggling with depression, anxiety, an eating disorder, and trauma over the course of several years. During the beginning of the film, which lasts a little over 25 minutes, Kesha describes her feelings as "suffocating slowly, the colors of life washed away, covered by a thick, dark, sadness." While she says these words, the film shows her inside a pink house and covered in pink paint, lying on a bed incapacitated and with her eyes rolled back to show only their whites.

It's a disturbing image, and one clearly meant to represent Kesha's struggles in the time before Rainbow was released. But happily, the documentary also depicts the Kesha of today, wearing a jacket with rainbow fringe, coming into the pink house and giving hope that the petrified Kesha will make it through. She revives her bed-ridden self as the Rainbow song "Bastards" plays, and it's a moving, surreal depiction of overcoming obstacles and finding inner strength.

Rainbow: The Film comes out on Friday, Aug. 10 on Apple Music, and while it's certainly striking how Kesha represents her pain with abstract imagery, it's the absence of certain words that's most effective in the short doc. Never in the video does Kesha mention Dr. Luke, the music producer who she accused of committing sexual, physical, and emotional abuse, allegations which Dr. Luke, aka Lukasz Gottwald, has denied since the two's legal battles began in 2014. Yet her pain is clearly felt, so naming him isn't necessary. Besides, over the past several years, Kesha's legal battles have been so throughly discussed that the fact that she doesn't mention them directly during the doc ensures that the film powerfully focuses instead on her journey of returning to the stage.

Before 2017's Rainbow, Kesha hadn't released a solo studio album since Warrior in 2012. In the documentary, Kesha gives fans a glimpse into the music she made and performed in between her albums, when she fronted the band Kesha & The Creepies. "For the first time since high school, I was playing live music for the thrill of it," the singer explains. Getting back on-stage was instrumental in allowing Kesha to re-discover her passion and ultimately make a personal album about her hiatus from the spotlight.

The result has had quite an impact. "Praying" has become an anthem for survivors of any kind of trauma or hardship, and the whole album is filled with similarly powerful tracks. In one scene, producer Ben Folds asks Kesha why she writes so many lyrics about darkness, to which the singer simply responds, "In the dark, I realized life is short."

Throughout the whole documentary, it's made clear that Kesha has been through very difficult times — she discusses going to rehab and dealing with severe trauma, among other things — but luckily feels now like she's been reborn. It hasn't been an easy process, though; one scene reveals the singer struggling to get through a rehearsal of "Praying" before the 2018 Grammys. "I’m there and there’s all the people, and there’s Beyonce," Kesha says, discussing the pressures of singing about her traumatic experience in front of such a major audience.

Most people don't have to share their stories of overcoming personal trauma in front of Beyonce, but as everyone saw during that Grammys performance, Kesha performed that daunting task tremendously well. Ultimately the doc shows the singer as a source of inspiration for so many people, and Kesha makes it clear she wants her fans to seek help when they need and find their own inner strength. It doesn't have to be in front of Beyonce, but it can still be incredibly important.