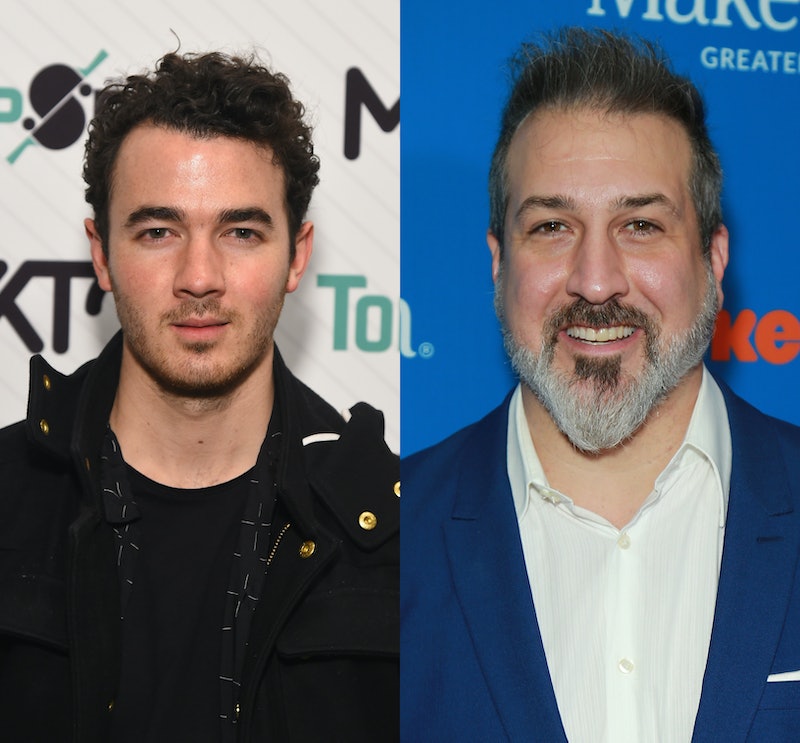 The worlds of *NSYNC and The Jonas Brothers collided on Saturday, March 30 when Kevin Jonas serenaded Joey Fatone with a classic *NSYNC song. Per Fatone's Instagram, it appears that the boy band favorites are attending the birthday party of celebrity wedding planner Michael Russo, and by the looks of things, they're having a blast. The Masked Singer star shared a video of Jonas singing "This I Promise You" on Instagram that's so good it will make you wish The Jonas Brothers would release a cover album featuring all of the greatest boy band hits of the past.

In the video, Fatone and Jonas are joined by Fatone's girlfriend Izabel Araujo and Jonas' wife Danielle, both of whom get in on the act. They're all singing and swaying together, but it's impossible to deny the "Sucker" singer's musical prowess. "This is what happens when you drink a bit too much and @kevinjonas starts to serenade you with one of your songs lol! Dreams do come true," the former *NSYNC member captured the hilarious video.

The fun didn't stop there though. It wasn't long before someone busted out The Jonas Brothers' new smash hit "Sucker" for the couples to jam to. So, if you've ever dreamed of seeing Fatone dance to a JoBros song, then this really is your lucky day.

Fatone captioned the second video, "And I drank some more and you can’t help but dance when u hear a smash hit song!! Well done @jonasbrothers!" Clearly, these guys have nothing but respect for each other. It's a multi-generational boy band lovefest that the world didn't even know it needed.

This isn't the first time that Fatone has gone on record as a Jonas Brothers fan. After he was revealed as the Rabbit on Fox's reality series The Masked Singer, he shared with Bustle that he was a tiny bit jealous of the JoBros reuniting. "Of course, in the back of my mind, don't get wrong, I'm like, 'Dammit, Jonas Brothers, smart move,'" he said in the early March interview. "It's like that kind of thing, 'Oh, crap. I wish I would’ve done that.'"

Currently, there aren't any plans for *NSYNC to reunite since the guys are all busy doing their own things. But if Fatone wants to moonlight as an honorary Jonas brother in the meantime, no one's going to argue. In fact, Kevin might even embrace it — especially since he still owes his fellow boy band star one for helping him find the perfect wedding venue.

It seems that Jonas and Fatone go way back. Not only did birthday boy Russo plan both of their weddings, according to The Knot, the *NSYNC singer also shares the same wedding locale with Danielle and Kevin. In a 2012 interview with Allisonsworld.com, Jonas explained how his friend helped make his big day with Danielle extra magical. "I called Joey Fatone. I said, 'Hey where'd you get married?' And he was like, 'Well, I got married here (at Oheka Castle),'" he said. "I remember looking at their wedding (photos) and liking where it was, and I was like, 'Oh, it's Long Island. I can make that happen.' So Joey Fatone is actually the reason we got married where we did."

From wedding assists to impromptu serenades, these boy band pals always have each other's back.