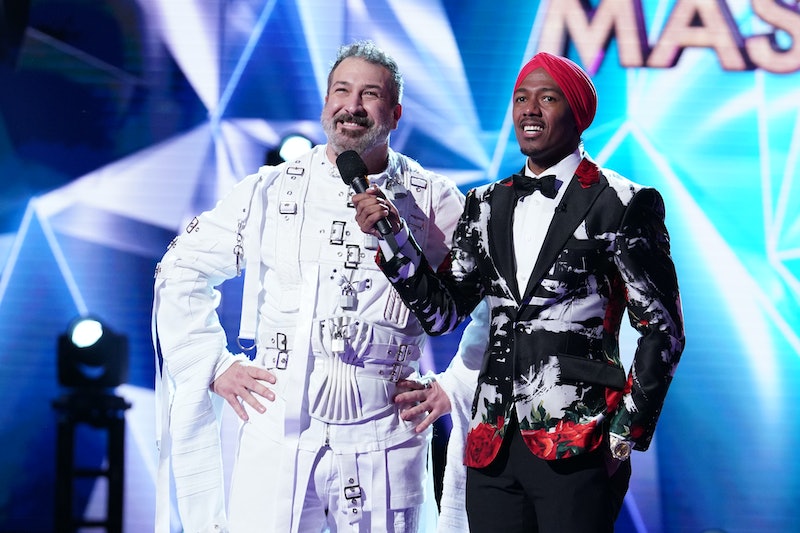 FOX's reality series The Masked Singer became a huge success almost immediately, all thanks to the celebrities willing to wear claustrophobic masks and over-the-top costumes. One of those celebs was *NSYNC's Joey Fatone, who was majorly praised for his time on The Masked Singer. As soon as the former boy-bander revealed himself as the Rabbit, fans quickly realized he deserved way more credit than he ever got during his *NSYNC days. While Fatone appreciates that sentiment, he also doesn't want you to feel bad for him, as he recently tells Bustle over the phone.

"It’s always nice to hear when you get praise like that in a sense," Fatone admits of all the positive feedback. That said, the Two Cups of Joe podcast host is totally fine with never being in Justin Timberlake's shoes as the so-called "lead singer," especially since he — along with J.C. Chasez, Lance Bass, and Chris Kirkpatrick — contributed musically 100 percent of the time. "I’m not the type of person who was like, 'Woe is me, I wasn’t the lead singer in *NSYNC,'" he says. "It had nothing to do with that, we all did our part. We all sang. We all did five-part harmonies."

Nevertheless, Fatone is glad The Masked Singer gave him a chance to shine, like it did for many other contestants who've experienced what it's like to be overshadowed by others, personally or professionally. He admits, "I’ve gotten a lot of love and support like, 'Oh, do a solo album,' or ‘Where is this voice? How come you’ve never showed it?’ I just never had the opportunity, and this was just definitely a fun opportunity at hand to do it."

Maybe one day Fatone will even get a chance to once again showcase his voice alongside his fellow *NSYNC members. There's always a possibility they could reunite, like Backstreet Boys, New Kids On The Block, and most recently, the Jonas Brothers. But while an *NSYNC reunion is something the Impractical Jokers: After Party host is totally down for, there's nothing set in stone.

He says that right now, "Everybody’s obviously doing their own thing," so "I don’t think any of us are even thinking of that." Instead, Fatone is keeping busy with things like his podcast and recently celebrating Dr. Seuss' 115th birthday onboard the Carnival Splendor, where he read Horton Hears a Who to the Boys & Girls Club of Long Beach.

Still, Fatone is a little bit jealous of the Jonas Brothers' current comeback. "Of course, in the back of my mind, don’t get wrong, I’m like, 'Dammit, Jonas Brothers, smart move.'" He says lightheartedly, "It’s like that kind of thing, 'Oh, crap. I wish I would’ve done that.'"

If you've lost all hope for a reunion from the band who made "Bye, Bye, Bye" famous, don't become totally discouraged. As Fatone notes, "I always say never say never. It's one of those things if the five of us want to get together and say, 'Hey, you know, this would be fun to do,' I think it’d be a great thing."

The one-time Dancing With the Stars contestant even thinks a reunion would benefit them, because it "would only help further all of our careers" and "keeps the brand alive." Plus, seeing as the band never really had an official goodbye, Fatone thinks they deserve one. "We still have unfinished business," he explains. "Sometimes, I think, because we never had a send-off, maybe if we did something it’d be like, hey, last tour, whatever the case may be."

For those who don't recall, *NYSNC went on hiatus in 2002, but never officially got back together. Years later, the entire band had a few small reunions. In 2013, they briefly sang as a group during Timberlake's solo performance at the MTV VMAs. Then, in April 2018, they earned their Hollywood Walk of Fame star, and in May 2018, they made a surprise appearance on The Ellen DeGeneres Show.

Still, Fatone wants to make it crystal clear: "Again, right now there’s not been a talk or something of a conversation that’s been brought up yet," regarding a reunion.

Who knows if the band will ever get back together, but never say never. And until an *NSYNC reunion happens (*fingers crossed*), at least fans can re-watch clips of Fatone as the Rabbit on Masked Singer to fully appreciate his pipes that deserved just as much credit all along.