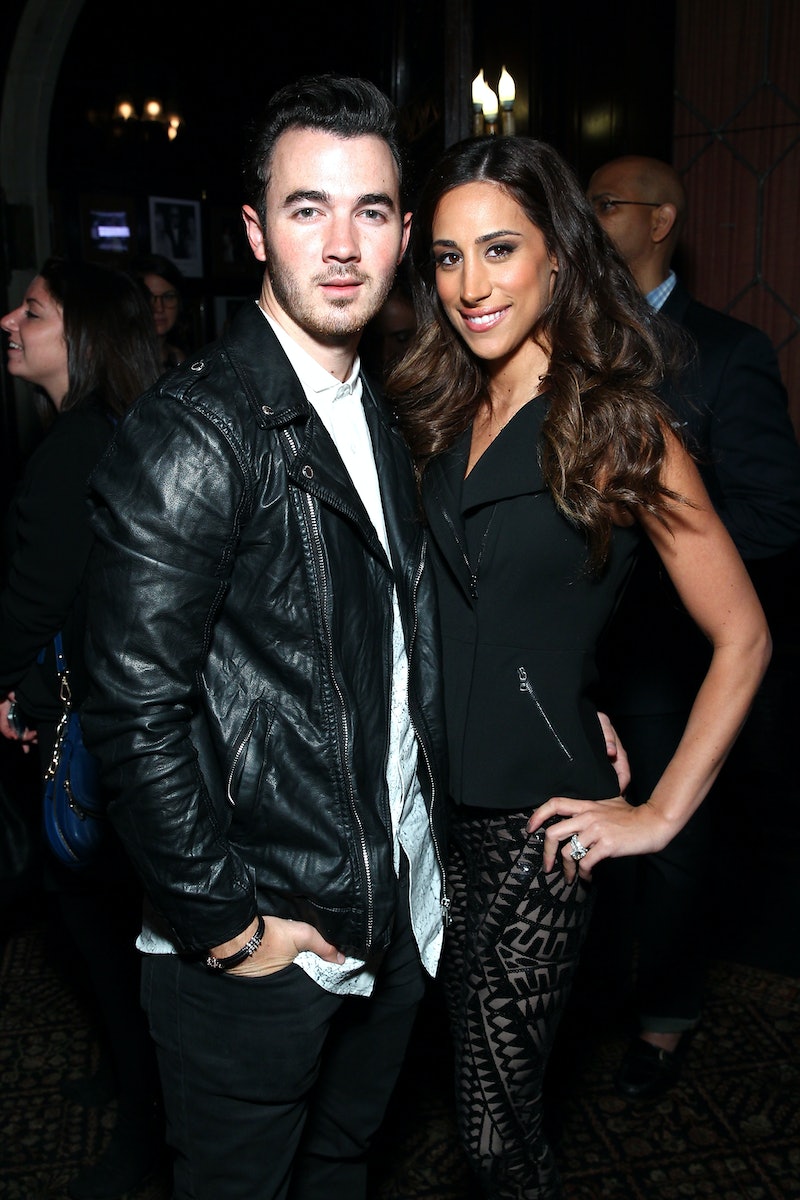 Now that the Jonas Brothers are officially back together as of the March 1 release of their single "Sucker," the boys are busy busy busy. And all of this work and travel means that eldest JoeBro Kevin Jonas and his wife Danielle have to spend some time apart. To show his love and support from afar, Kevin Jonas celebrated British Mother's Day by posting a picture of her from the set of the "Sucker" music video honoring her wonderful motherhood and partnership. He wrote out a heartfelt caption that really shows how perfect they are for each other, even after being married for almost 10 years and welcoming two daughters.

"Just want to say thank you to @daniellejonas for being such an amazing mother," he wrote. "Always putting your self second to the well-being of our girls. I know how hard it is to not be in the same place all the time but just wanted to say thank you for supporting me and loving me through it all. I missed you tonight so much. Be home soon baby."

By the looks of Danielle's Instagram story, the two attended a birthday party for friend and event planner Michael Russo on Friday, March 29. After the party, she posted a video of her and Kevin flying home in a helicopter with the caption, "Getting home to my sick baby fast." Their youngest, 2-year-old Valentina, was sick. The next morning she posted pictures of a toddling Valentina drawing pictures and feeling better after going to the doctor.

According to the Atlanta Journal-Constitution, the band did a pop-up concert in Atlanta on Saturday, March 30, and it looks like Danielle couldn't be there. She and the girls FaceTimed one of the JoeBro's family members or friends during their opening set, and she posted a video of their reactions to seeing their dad on-stage. It was precious. "Unreal to see their faces," Danielle wrote.

It seems like Kevin found it difficult to be onstage, states away, knowing that his wife was caring for their sick daughter at home. That's why he felt the need to show his appreciation, which never goes unnoticed. And of course, she doesn't fail to return the support for her husband's musical ventures and dreams. "Sucker" was a hit with fans and achieved the number one spot on Billboard's Hot 100 list on March 16, and she posted a note on Instagram about how proud she was.

"I am so excited to be able to see this all happen," she wrote. "I have watched you guys for years and I am so proud of you in so many ways. This time feels different .. well of course it does your #1 debut on @billboard !!!!! Unbelievable!!!"

This is only the beginning of the JoBros comeback — it's only been a month. They could release more music and eventually go on tour. So unfortunately for Danielle and their daughters, that means there's a good chance they'll have to spend more time away from Daddy. However, Danielle's been around long enough to know how to handle Kevin being on tour. Only this time, she has two little girls to keep her company. And knowing Kevin, he'll find a way to be there for them even on the road.