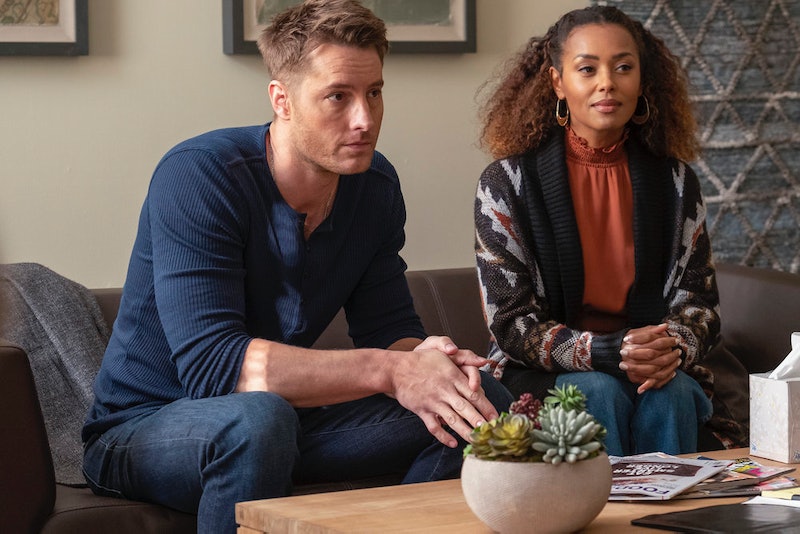 It feels like every week, Zoe and Kevin on This Is Us reach a new hurdle in their relationship. But whether it's been Zoe's past trauma, Kevin's battle with alcoholism, or even the small but essential conversations that come with navigating an interracial relationship, they've managed to stick together throughout all of it. That could soon change, though — their latest hiccup isn't something they need to overcome as a team, but instead a fundamental disagreement about how their relationship should move forward. Kevin and Zoe's conversation about kids, which was teased in the trailer for the season finale, might spell disaster for both of them.

As she revealed last week, Zoe does not want children. She's always known she doesn't want to be a mother — she enjoys the freedom her life offers, and the ability to travel the world at a moment's notice with no one in mind but herself. This isn't something Zoe is going to change her feelings about, she says, and she urges Kevin to take some time and figure out if that's going to be OK with him.

Kevin, on the other hand, has always thought of children as some kind of inevitability — obviously he'd have them, and have a family like the one he grew up in. When he learns about Zoe's standpoint, he hesitates, but quickly says this won't be a dealbreaker. And yet, in the trailer for this week's episode, he's shown saying that sometimes people think they know what they want, and then sometimes things change.

Trying to change someone's mind about having children is never a good idea. Couples have to make compromises all the time about where to live and which career opportunities to pursue, but becoming a parent is one thing that no one should give up on, or take part in, if they're not absolutely on board.

If Kevin tells Zoe he's OK with not having kids if it means they get to be together, but then starts to drop hints about how she might change her mind, that's completely unfair. Zoe was extremely straight up and mature in the way that she let Kevin know this was her decision, and she was willing to let him off the hook with no hard feelings if he wasn't willing to make that compromise. He said it would be alright, and that shouldn't come with any strings attached. But if he plans on trying to subtly chip away at her determination to be child-free, it is not going to end well for anybody.

And of course, if Kevin wants kids, he shouldn't have to go without them. He absolutely has the right to move on without Zoe — she can't ask him to give up such a big part of his future, either.

But the difference between the two of them seems to be that Zoe has made peace with her decision and its potential ramifications in her relationship. She's willing to let Kevin go if it doesn't fit into his plan; it'd be heartbreaking, but it'd be the right thing to do. She's not pretending to be OK with having kids for him, and going on to pepper in little passive comments about how she'd really rather not. Kevin seems to be channeling the idea that even if they fundamentally disagree on something this big, it can be fixed, or that he can convince her of all she'd supposedly be missing as a mother.

It's downright exhausting for people, particularly women, who are child-free, to be told that their opinion will change somewhere down the line. Zoe is an adult who is well aware of the harsh realities of life — she doesn't need to grow out of any phase or come into some epiphanic realization. Not every woman's purpose is to be a mother, and it's time we normalize that thought.

If Kevin comes to a well-thought out decision that being with Zoe is more important to him than being a father, that's great — I hope they live happily ever after with no regrets, I really do. But this teaser suggests he's only flimsily on board, and that's not fair to anyone involved.