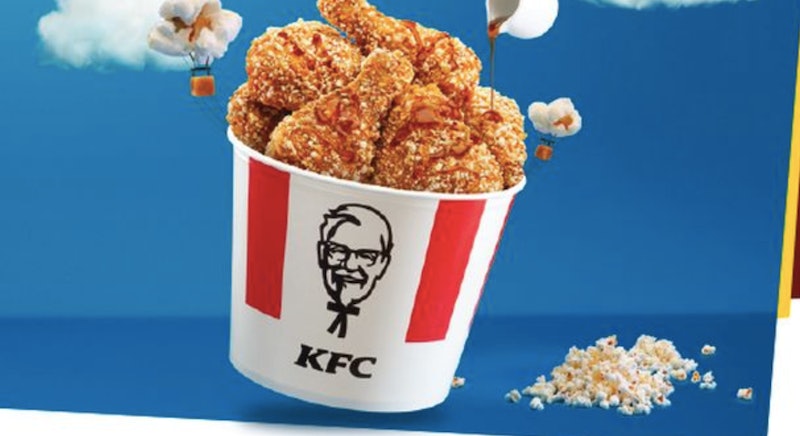 Sweet and savory are an epic combination — there's a reason people are obsessed with sweet popcorn and cinnamon-sugar pretzels. Mixing the two flavors basically creates the food equivalent of magic. And now, popcorn chicken is joining the ranks of sweet and savory goodness. No, not that popcorn kitchen — the little bite-sized balls of fried glory — I'm talking about chicken with actual popcorn. KFC Popcorn Chicken is now a thing. It's chicken that's been breaded and battered with real popcorn. But it's only available in Hong Kong, so you may have a long flight to get your hands on this deliciousness.

According to Brand Eating, the chicken will be battered with actual popcorn pieces and, to really up that sweet-savory ante, they're also serving it with a caramel-flavored sauce ready to be drizzled on top. Caramel popcorn chicken, anyone? To be honest, with chicken and waffles being so dang popular, it's easy to see why popcorn-breaded chicken would be a big hit. No telling yet whether or not it will get stuck on your teeth, but it probably will — that is popcorn's everlasting gift to us all. Add caramel and your molars are essentially doomed.

If you're not into chicken, don't worry — KFC can still provide you some sweet and salty combos. Along the sweet-popcorn theme, KFC Hong Kong is also offering a Caramel Popcorn Sundae. Brand Eating reports you can get a mini-KFC bucket filled with vanilla soft serve, topped with caramel popcorn and caramel-flavored sauce. I may just try to make a version of this at home — apologies to my teeth for the forthcoming cavities, but, in my defense, I really should never have been given tooth-level responsibilities in the first place. I'm not worthy.

According to the site for KFC Hong Kong, a Hong Kong-based franchise of KFC run by Birdland (Hong Kong) Limited, the popcorn chicken is also available as part of a meal deal. You can get two pieces of chicken, potatoes with gravy, and a medium drink — all for around six American bucks. Or you can go bigger with a bucket meal. Life is good. And sweet. And savory.

It can seem like KFCs around the world get all the glory, while back at home we're just left with regular old fried chicken. In fact, I'm still not over the KFC Mac n' Cheese bun that made an appearance in Singapore, because I can't think of a single thing more American than a mac n' cheese bun holding together a pile of fried food. And yet, it wasn't for us. But sometimes, they do deliver in the US of A. If you're looking for that sweet and savory flavor right here at home, KFC's Chicken and Waffles are still available in North America until April 29, so you might want to get a move on. I'm sure there's a lot more to come from the minds that brought us the KFC hot tub (yes, shaped like a bucket of chicken, because of purity and goodness).

Is there a chance that popcorn-breaded chicken will be making an appearance on American soil soon? I just don't know. We can only hope. Until then, start googling flights to Hong Kong, because popcorn, chicken, and caramel sauce sound like a truly epic combination.