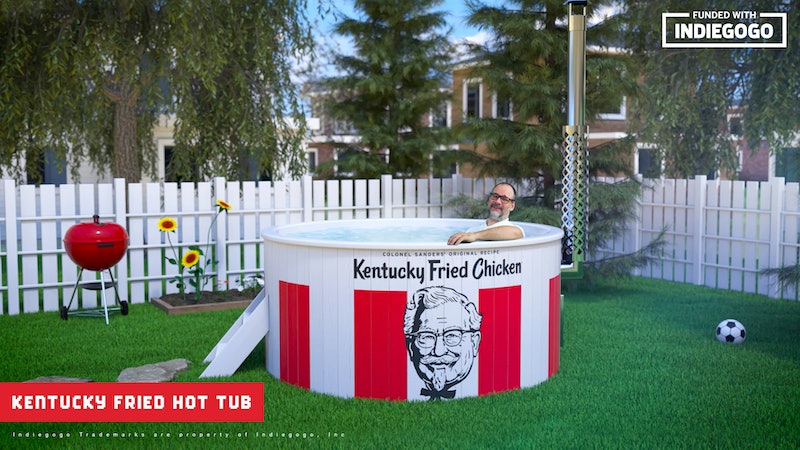 On a scale of one to 10, how surprised would you be if I told you that KFC had invented a “Kentucky Fried Hot Tub” — that is, a hot tub shaped like a bucket of fried chicken? Given KFC’s track record (hi there, chicken-scented Yule log), it’d be understandable if you weren’t that surprised. But what if I told you that KFC had also put together an entire “KFC Innovations Lab”? And that the Kentucky Fried Hot Tub was just one of five projects said lab had cooked up? That’s, uh, perhaps a little more surprising — but it’s true. What’s more, all five projects have one thing in common: They need your help to become a reality. Good thing IndieGoGo exists.

On Tuesday, KFC launched the new KFC Innovations Lab initiative as the next step in their kooky, stunt-y marketing plan. Through five separate IndieGoGo campaigns, the company hopes to crowdfund the money to bring a number of larger-than-life, KFC-themed items to the world: The “Little Colonel Locator,” a tie that can help you find whoever is wearing it as long as they’re within 100 feet of your smartphone; the “Smart Cane Remote,” which hides a television remote in the top of a cane not unlike the one Colonel Sanders is often seen carrying; the “Picnic With The Colonel” pop-up picnic table set; the “Colonel On Ice” show, which would tell the story of Harland Sanders’ life via an Ice-capades-esque skating show; and, of course, the aforementioned “Kentucky Fried Hot Tub.”

If you’re anything like me, one very specific question immediately popped into your head: Is this a joke? In fact, the first question on the FAQs for all of the IndieGoGo campaigns asks that same question — and the answer is the same across the board: It is not a joke. “This is for real,” reads all of the FAQs. “We have done a lot of research and planning into how this project will actually be brought to life. Though the content or tone of this campaign may be humorous, we are standing by to bring this to life for real if we reach our funding goal” — so, uh, yes: They mean business.

Said Steve Kelly, KFC U.S. director of media and digital marketing, in a press release provided to Bustle, “KFC was founded with the spirit of innovation — the Colonel’s patented pressure frying process, bucket packaging, and his secret blend of 11 herbs and spices took the world by storm. With the launch of KFC Innovations Lab, non-Colonels can now be part of that process and support important projects such as a hot tub that looks like a bucket of fried chicken, so we can keep focusing on making actual buckets of fried chicken.”

As… uh… fascinating as all of the projects are, the Kentucky Fried Hot Tub is clearly the standout. 35.5 high and 88 inches wide, the hot tub features a wood frame made from “high-density, thermally treated, flaxseed-oiled Nordic spruce,” a vinyl liner with molded seating, and a vinyl top cover. It’s not electric, instead using a wood-fired furnace to heat the water; an exhaust stack makes sure the smoke goes up and away, rather than into your face while you’re basking in the tub. It holds 250 gallons of water and seats five adults.

One thing to note: The KFC Innovation Lab gets the money to develop each item only if the individual campaign goals are met. If any of them are, and you donate to a fully-funded one, your money will go to the lab, and any perks you might be eligible for based on your donation tier will get shipped out according to the date noted on the campaigns themselves. If, however, you donate to a campaign that doesn’t meet its goals, the item won’t enter development and your money will be returned to you. You also won’t get any perks. So, if you do by chance choose to donate $13,311 to the Kentucky Fried Hot Tub campaign, you’ll only get the hot tub if the campaign raises the full $46,683 — but if it doesn’t, your $13,311 will go back into your own pocket.

Of course, in addition to the “is this a joke?” question, the FAQs for all of the campaigns also address the question of why KFC, “a successful fried chicken empire with lots of money,” is turning to the general public to fund its latest stunt. And the good news is, the money raised goes only to the KFC Innovations Lab, not directly to the corporation itself. “We created this crowdfunding campaign to bring people into the process of selecting and supporting new ideas, so they can be a part of the process and we can keep focusing our business on making the world’s best fried chicken,” the FAQ states. “We’ve based the prices of the items and perks at the total cost to produce the items, including any prototype costs. None of these funds will go into the Colonel’s pocket or directly to KFC.”

And, hey, if the idea of sending more money to an already-formidable company to develop wacky and expensive items that don’t really have any practical value for your everyday life doesn’t do it for you (understandable!), then you’re free to ignore the whole thing.

If you want to check out the KFC Innovations Lab campaigns, though, all of them can be found here. You can also find short videos about each item on the KFC YouTube page.

Is it lunchtime yet?