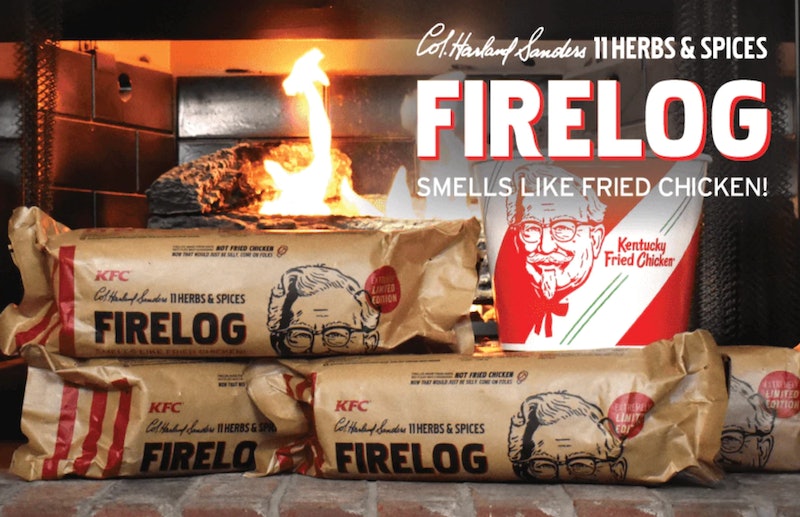 You know, when I woke up this morning, I can’t say that “you can buy a KFC-scented log now” was something I expected to be typing at any point during my work day, but, well… here we are: You can buy a KFC-scented log now. Called the KFC 11 Herbs & Spices Firelog, this bizarrely fascinating item will make your entire house smell like fried chicken if you chuck it into your fireplace and set it ablaze. So… uh… that happened.

To be fair, KFC is no stranger to… let’s call it, unusual merch. For many years, though, the wackiest-sounding promotions were offered primarily internationally. For example, in 2014, a fried chicken computer keyboard surfaced in Japan; the KFC “Memory Bucket” smartphone-compatible photo printer arrived in Canada in 2015; in the spring of 2017, Hong Kong got KFC-flavored nail polish; and returning to Japan, KFC unleashed a chicken-y bath bomb on the unsuspecting public just about a year ago. With the exception of an apparel and accessories line released in the summer of 2017, though, the United States has been something of a KFC merch desert.

Until now, that is. The KFC 11 Herbs & Spices Firelog has the distinction of only being available for delivery in the United States and Canada — so, I mean, if we really had to wait this long for some weird U.S.-based merch, maybe something you’re literally supposed to light on fire is worth it.

Made by Enviro-Log — a company that claims to make “the greenest and most versatile firelogs on the market,” with materials including 100 percent recycled wax and cardboard — the KFC 11 Herbs & Spices Firelog smells like straight-up fried chicken when it burns. But not just any fried chicken; it specifically mimics the scent of KFC fried chicken. It is, the dedicated website for the item claims, “significantly more effective at making your home smell like fried chicken than burning actual fried chicken.” Each Firelog can burn for up to two and a half to three hours, and has a pretty much infinite shelf life as long as you store it in safe, dry place away from any pets you might have. The Firelogs are $18.99 including tax, shipping, and handling; you can order them from the KFC Firelog website here.

Speaking of, that website is truly something to behold. “YOU’LL NEVER SETTLE FOR A BORING, FIRE-SCENTED FIRE AGAIN,” it screams at you in all-capital letters as soon as you arrive. It then goes on to detail the many advancements in fire technology that have been made over the course of human history, from experiments in fuel sources (“sticks or leaves or various incriminating documents”) to figuring out how to make it burn in various colors. And then, it makes the loftiest claim possible about thee KFC 11 Herbs & Spices Firelog: “[It] finally puts to rest the age-old dilemma, ‘How can I make this fire a hundred bajillion times better?’”

I... was not aware that this was a question we were asking in the first place. But maybe I am just very, very out of the loop. I don't know. You tell me.

Those are all direct quotes, by the way. The whole thing reads a little bit like Steve Buscemi strolling up to you in the school hallway with a backward baseball cap on his head and a skateboard in his hand.

Give him a KFC Firelog and you’re good to go.

Also, a word of advice: Although Enviro-Logs are often popular picks for campfires, I’m going to recommend that you do not burn the KFC Firelog in the great outdoors; that’s how you get bears. And you do not want bears. Trust me on this.

Get your own chicken-scented log here. Or get your own unscented Enviro-Log here.