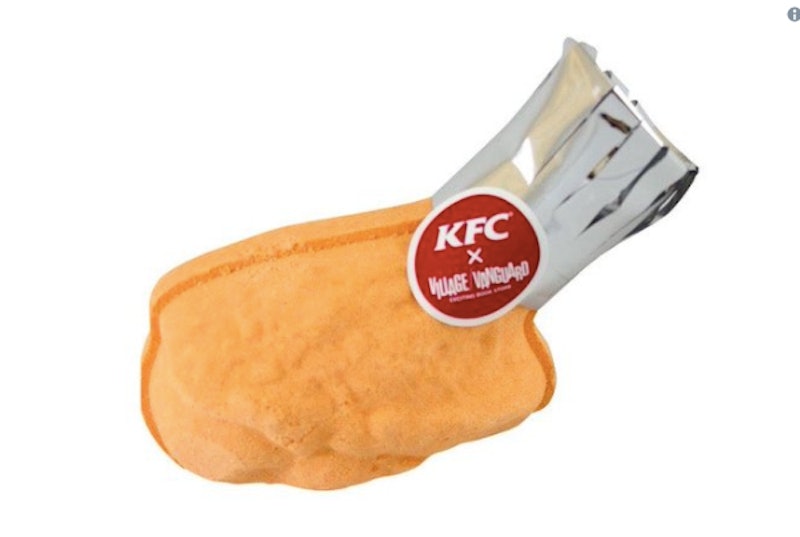 I think it's safe to say that there are few brands as extra as KFC. When the Colonel isn't busy making headlines for his romantic KFC fan fiction or breaking the Twitter-sphere with the very specific spices he follows, he appears to be hard at work concocting even more eyebrow-raising, finger-lickin' social media campaigns — the latest being KFC bath bombs. That's right — someone on this earth was born, raised, and eventually employed to create a bath bomb that leaves bathers smelling like the famous KFC herbs and spices.

Just in case there was any mistaking it for, say, a bath bomb that smells like a logical thing you might want to whiff when a human being strolls by, KFC's is shaped like a drumstick. The bath bomb, which is available in Japan, is the product of a collaboration with the novelty brand Village Vanguard (and also possibly Satan; only time will tell). Once you put it in the bath tub, and presumably also put your body in said tub, you will smell like the 11 herbs and spices in the ~secret~ KFC fried chicken recipe.

As someone who worked food services and come home reeking of basil every night (YOU'RE WELCOME, ROOMMATES), I'm not entirely sure what the appeal here is; but as a fan of fried chicken and bath bombs, and I am reserving judgment until I see/smell one in action.

Truth be told, though, even if you live in Japan where the promotion is running, getting your hands on one is going to be about as tough as getting them on that secret recipe. The lucky (?) owners of these bath bombs will be decided in a lottery that will take place every day between November 1 and November 15, with 100 of them raffled off each time. Your best bet is to pack up your bags and head to Japan if your serious about getting your fried chicken perfume game on; your next best bet is probably just to boil some chicken broth, dump it in the tub, and splash around for a bit (but don't let me tell you how to follow your chicken bliss).

If this seems really and truly bizarre to you, it turns out that this actually is far from KFC's first foray into the beauty world. In 2016, they took "finger-lickin'" to whole new levels with a KFC-flavored nail polish that you could actually eat. I'd be more aghast at the whole thing if the colors weren't actually ridiculously classy.

And, of course, who could forget the KFC-inspired merch that the brand dropped earlier this year? Alas, it is all sold out now; personally, missing the boat on the "Fried Chicken USA" sweater is one of my greatest regrets in life and now that I'm writing about it I feel the pain as fresh as it was in July. Don't look me in the eye.

And then, of course, way back in the day — OK, back in 2014, but we were all such sweet summer children then — KFC released its limited edition gold-plated bone earrings, which cost a cool $200 each. As willing as I am to do it for the fashion, I cannot help but mentally calculate exactly how many potential buckets of fried chicken a person could eat with that money instead.

Anyway, the timing of this bath bomb could not be more perfect, as I intend to use it for the most noble of purposes: attracting Known KFC Enthusiast and Hawkins' Resident Hot Babysitter, Steve Harrington.

What? Stranger things have happened. (I'm sorry, I'm sorry; I'll see myself out.)