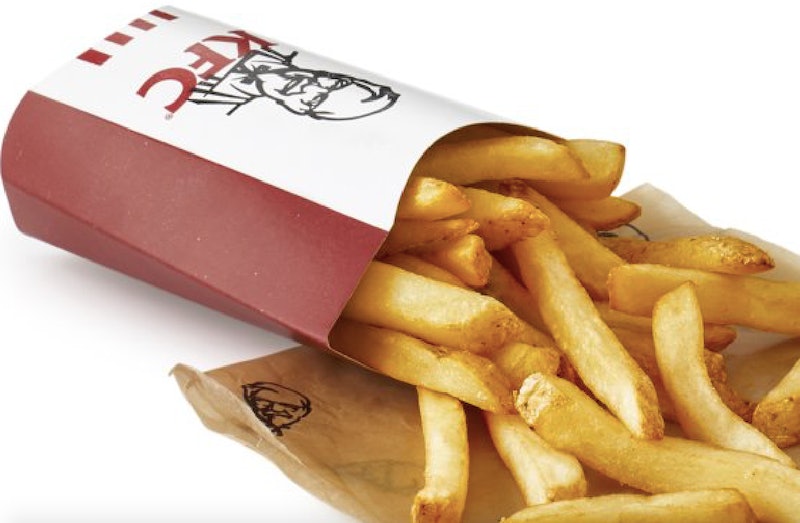 Allow me to hit "pause" on all of the rampant chicken sandwich drama that Popeyes brought down on the internet this month, and introduce you to what might be your next fast food obsession. KFC is reportedly testing "Secret Recipe" Fries, according to a post on popular food website The Impulsive Buy. Bustle reached out to KFC, and a spokesperson for the chain confirmed the test launch, telling Bustle, "KFC is currently testing Secret Recipe Fries in select markets. We are always testing new menu items to see what resonates with our customers."

While the full scope of which KFCs are in the test market aren't clear, according to The Impulsive Buy, at least one location was spotted by a reader named Angela D. at a KFC in Greenfield, Indiana. If you're a KFC stan, you know that "Secret Recipe" can only be referring to KFC's secret blend of spices and herbs for its fried chicken, dubbed KFC's Original Recipe (KFC infamously and cheekily is only following 11 people on Twitter, all of them some variety of spice or herb). While fans have been attempting to recreate the iconic blend for ages, KFC has apparently gone ahead and innovated by adding it straight to their fries.

Officially, fries don't seem to be on the current KFC menu; the chain's Seasoned Potato Wedges are still a mainstay, along with Mac & Cheese, Mashed Potatoes, Biscuits, Green Beans, and all your usual KFC fare. While it might not seem like such a big deal to people who are already fans of the "Secret Recipe" in KFC's fried chicken, this new offering does offer an exciting opportunity to vegetarians (if it is, in fact, free of meat products) to finally try the blend for themselves.

Granted, if you're pretty sure you're not in the test market for this item, there may be hope for you yet. If you're not bold enough to DIY a version of KFC's blend and cart it into a KFC under the eyes of Colonel Sanders and god, then it might be worth a shot asking if a KFC employee will season your wedges with the blend (assuming that the "special blend of herbs and spices" described on the site's listing for them isn't already the blend).

While these "Secret Recipe" Fries are pretty exciting news for KFC fans, it still isn't by far the biggest news to come from the chain this week — on Aug. 27, it introduced plant-based fried chicken, in a collaboration with Beyond Meat that tested at a location in Atlanta. That test could very well determine the chicken-less fried chicken future, as I imagine the test of these "Secret Recipe" Fries in Indiana will determine their overall fate. Until the verdict comes down on either of those menu offerings, though, you still have plenty of things to enjoy at KFC (and by "things" I mean the Mac & Cheese Bowls that were just introduced to the menu nationwide, praise be to cheese).