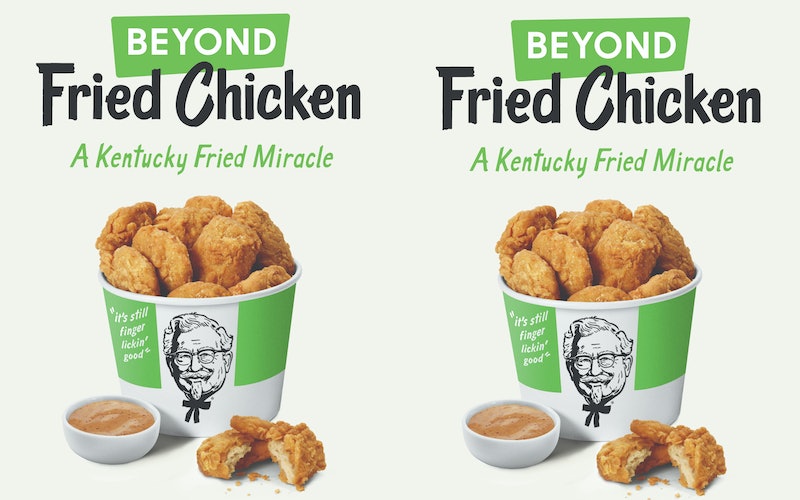 This may be the happiest day of my life. Come round, my fellow plant-based eaters, come round and hear the news. We've waited so long for this moment — through some truly terrible plant-based offerings — but now, it's here. KFC's plant-based Fried Chicken with Beyond Meat has arrived to make the world a better place.

You may already be familiar with the amazingness that is Beyond Meat and the Beyond Burger — in fact, if you're veggie or plant-based then I'm pretty sure you have. But now, they've teamed up with the Clucker King himself, Colonel Sanders, to give us a chicken offering. The company is running a very exclusive test on August 27.

The only problem? When I say exclusive, I mean really exclusive — like only at one restaurant. If you're lucky enough to be in Atlanta then head on down to the Cobb Parkway restaurant near SunTrust Park (or (2637 Cobb Pkwy South East, Smyrna if you want to throw it into your GPS). You'll be able to try out these new nuggets with dipping sauces and boneless wings tossed in either Nashville Hot, Buffalo, or Honey BBQ sauce.

The nuggets are even available in combo meals with a side and medium drink at $6.49 for a six-piece set and $8.49 for a 12-piece set. Or try four on pieces on their own for only $1.99. If you're more interested in the wings, it will be $6 for six pieces and $12 for 12 pieces, plus tax. I would definitely head for the wings, but that's just me.

It's amazing to see such a huge brand getting on board the plant-based eating train.

“KFC is an iconic part of American culture and a brand that I, like so many consumers, grew up with," Ethan Brown, founder and CEO, Beyond Meat, said in a press release. "To be able to bring Beyond Fried Chicken, in all of its KFC-inspired deliciousness to market, speaks to our collective ability to meet the consumer where they are and accompany them on their journey. My only regret is not being able to see the legendary Colonel himself enjoy this important moment."

Please get down there and give these a shot — not just because they look incredible, but also because the company has indicated that feedback from this test will be looked at as part of more testing or.... wait for it... even a "potential national rollout."

That's right, Atlanta, it is your job to show the nation how much we want this. And, as a Spice Girl would say, we really, really want it. In fact, I'm googling if there's any way for me to drive across the Atlantic from London to Atlanta by tomorrow.

This isn't the first time KFC has delved into the veggie sphere — there was a KFC Vegan Burger tested in the U.K. earlier this year and there have been rumors about testing a KFC vegan chicken recipe for some time. But with chains like Burger King launching the Impossible Whopper and other plant-based goodies, it's clear that the time is now.

So let's see how tomorrow goes, but fingers crossed KFC takes the leap and brings Beyond Fried Chicken nationwide. It's about clucking time.