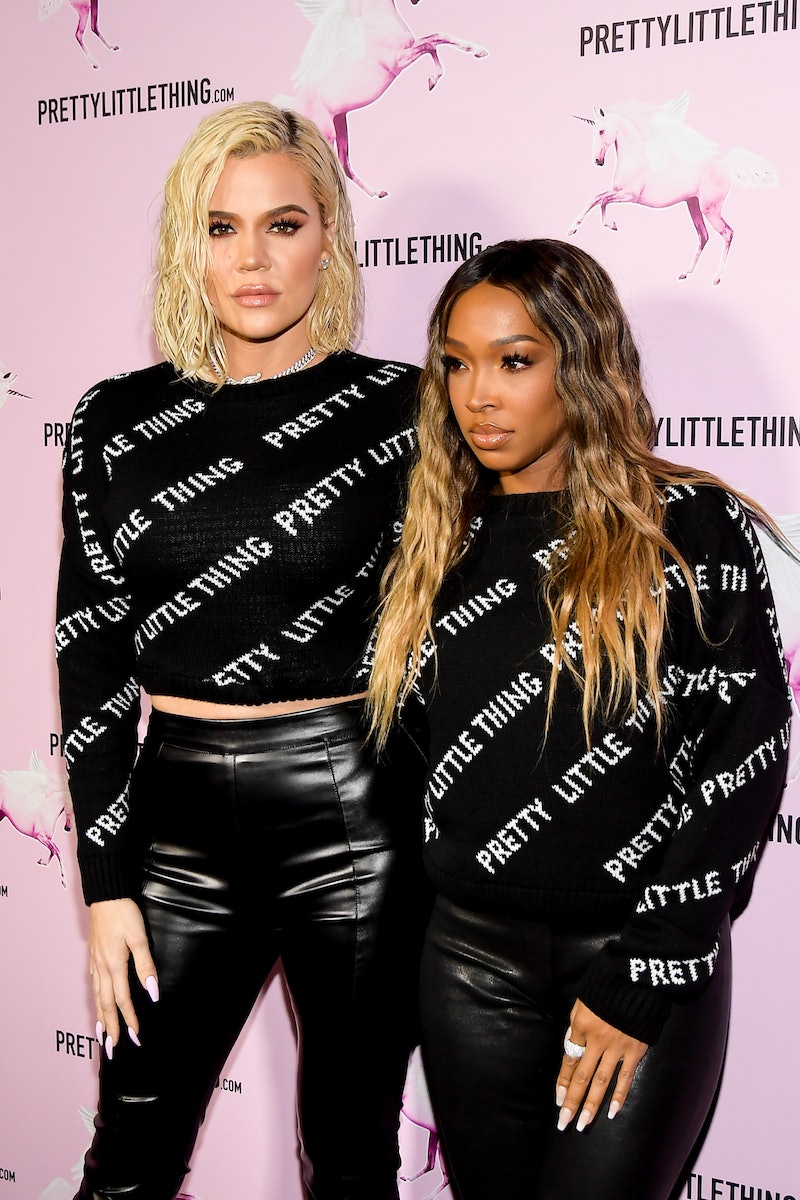 It's been a rollercoaster week for the KarJenner family, given all of the drama surrounding Khloé Kardashian, Tristan Thompson, and most surprisingly, Jordyn Woods. Following this wild ride, on Wednesday, Feb. 20, Kardashian attended her first public event since the Thompson cheating rumors emerged. And she did so with her BFF Malika Haqq right there by her side.

You can always count on Haqq to be there for her bestie through thick and thin. Most recently, that close bond was on display at the opening of a new PrettyLittleThing store in Los Angeles. Not only did they attend the outing together, but they even coordinated outfits. Both ladies wore black PLT sweaters, leather pants, and pointed toe heels. In other words, Kardashian and Haqq totally rocked their recent appearance in pure style. Seeing as though it's been quite a busy week for the KarJenner family, it's great to see these BFFs put on a truly united front after those accusations emerged.

In case you somehow missed it, the pair's oh-so-fashionable outing came shortly after news broke on Feb. 19 that the Keeping Up With the Kardashians star's boyfriend had reportedly cheated on her with Kylie Jenner's longtime bestie Woods, according to TMZ and Hollywood Unlocked. It was subsequently confirmed that Kardashian and Thompson had officially split, per E! News. (Bustle previously reached out to reps for Kardashian, Woods, and Thompson, but did not hear back.)

In response to the cheating allegations, Thompson reportedly tweeted (and subsequently deleted), "FAKE NEWS," around the time that the reports emerged, per ELLE. While Kardashian, Woods, or any of the other members of the Kardashian-Jenner family have not directly commented on the news, there have been more than a few instances of the crew acknowledging the situation in more subtle ways.

According to Us Weekly, both Kendall Jenner and Kim Kardashian have unfollowed Thompson and on Instagram (Kim has also unfollowed Woods on the social media site). Meanwhile, Haqq also supported her friend on social media with a very "strong" Instagram comment. According to E! News, Kardashian, Haqq, and family friend Larsa Pippen all commented on a Hollywood Unlocked Instagram post discussing the cheating claims. The KUWTK star wrote a series of shouting emojis in the comments section of the post. Her BFF wrote, "STRONG FACTS," with Pippen also writing how much she agreed with the Instagram by saying, "Amen!"

As for Kardashian, she also seemingly broke her silence about the situation via her Instagram Story on Feb. 21. Although she didn't mention Thompson or Woods by name, she posted multiple quotes on her Instagram referencing the split and the cheating rumors.

The first quote read, "the worst pain is gettin hurt by a person you explained your pain to." She also posted, "Somebody needs to hear this...That betrayal was your blessing!!!" The final heartbreaking message she posted read,

"If they ask you about me, tell them: 'She was the only person that loved me with honesty, and I broke her.'"

Kardashian also subtly responded to the rumors by liking a few tweets about the drama. One of those tweets happened to be from E! News, who posted a couple of photos of the reality star and Haqq and wrote, "The only relationship we trust."

Considering that this whole situation is more than a little messy, it's nice to see that Kardashian has such a great friend like Haqq that she can lean on and trust during what has to be a very stressful time.