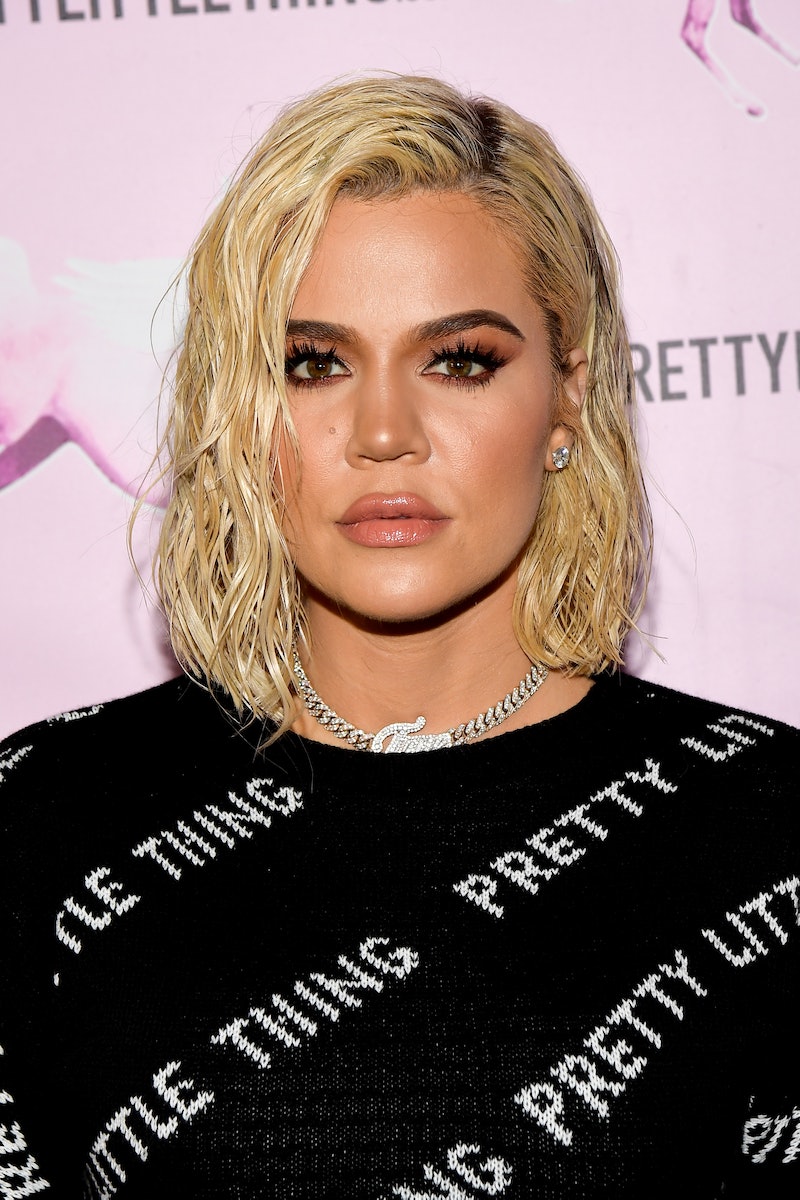 After commenting a few very telling emojis on an Instagram post earlier this week, it seems like Khloé Kardashian is finally addressing her split from Tristan Thompson on her own social media page. News of Kardashian and Thompson calling it quits broke on Tuesday, amid reports that the NBA player may have cheated on her again — this time with a close family friend. While neither party has officially confirmed anything, Kardashian's new Instagram posts referencing the breakup really do seem to speak for themselves.

Let's quickly recap: On Tuesday, E! News and Us Weekly confirmed that the pair broke up. This happened hours after TMZ and Hollywood Unlocked claimed Thompson cheated on Kardashian with Kylie Jenner's BFF, Jordyn Woods, at a house party. (Bustle previously reached out to reps for Kardashian, Woods, and Thompson, but did not hear back.) When Hollywood Unlocked shared the rumors on their Instagram page, asking Woods and Jenner to explain some things, Kardashian wrote a bunch of yelling-face emojis in the comments.

Now, elaborating beyond just emojis, Kardashian shared a series of heartbreaking Instagram Stories on Thursday. The reality star posted three different quotes, as well as a cartoon image of a woman crying. The first quote said, "the worst pain is gettin hurt by a person you explained your pain to." Another read, "Somebody needs to hear this...That betrayal was your blessing!!!" The final one may be the most devastating:

"If they ask you about me, tell them: 'She was the only person that loved me with honesty, and I broke her.'"

In addition to her Instagram Story posts alluding to the situation, Kardashian has been favoriting a few tweets that appear to be related. Late on Tuesday, a fan @NarbehKardash posted about a supposed DM conversation with the Good American founder:

"I spoke to Khloé on IG DM and she wanted me to let you all know that she loves us all and that she can’t 'thank God enough for each and everyone of [us]'. I notified her that I’m here to pass this message along"

"@khloekardashian dont let anyone ever say this is your fault!. He is a sick man and if its true, then she is a terrible woman, both terrible people that do not deserve your love. TRUE does and ur doing great showing her that love."

Sure, none of these things serve as a direct statement on the matter, but from the sound of it, Kardashian is coping the best she can, amid the breakup and rumored cheating.

She also shared a photo of flowers on Thursday on Instagram Story, contrasting the very sad quotes. Knowing how much the Kardashian-Jenner family appreciates a good flower arrangement, it's entirely possible they were sent by a loved one to boost her spirits.

Out of all the famous family members, Kardashian is often considered the most outgoing and outspoken. She's never one to shy away from speaking her mind, which means it's only a matter of time before she actually opens up. But of course, that should only happen if and when she's ready.

This isn't the first time Kardashian and Thompson have faced infidelity claims in a very public setting. Last year, right before Kardashian gave birth to their daughter True, reports broke that Thompson cheated on her multiple times. (While Kardashian has since acknowledged those allegations on Twitter, Thompson has not done so publicly.) Even so, the pair attempted to make their relationship work for the sake of their daughter, which makes the recent split reports all the more heartbreaking.

But another thing fans know about Kardashian — beyond being outspoken — is that she's strong. And there's no doubt she's got plenty of family and friends rallying around her at this time.