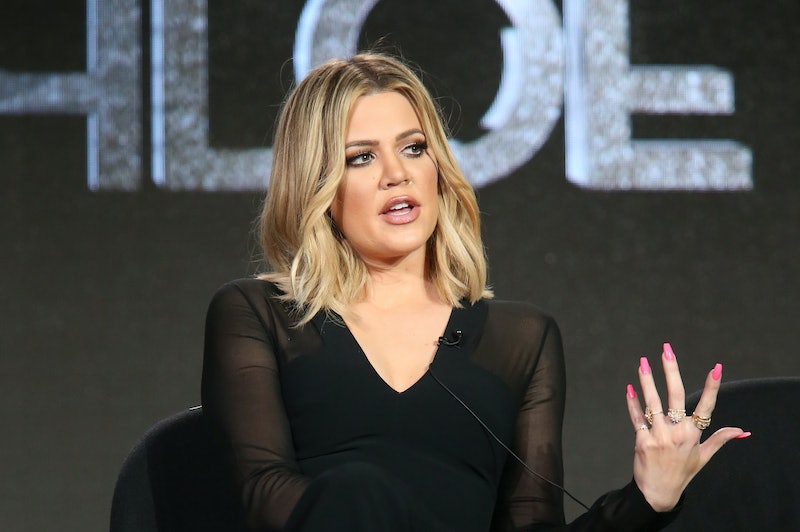 Khloé Kardashian hasn't given an official statement about the Tristan Thompson cheating reports or clarified their relationship status, but she's definitely focused on being a great mom to True Thompson. And in a post on her app and website on Wednesday, Khloé Kardashian revealed her Mother's Day plans. This Sunday marks her first Mother's Day since becoming a mom herself, so the weekend is sure to hold a special place in her heart. Kardashian wrote on her app,

I've always loved Mother's Day and celebrating Kris Jenner, MJ and my sisters — but this year will be even more special because now I'm a mommy, too! As of now, there aren't any special plans (that I know of, LOL). I'm really enjoying spending quality time with True and loving just hibernating with her.

Kardashian didn't mention whether Thompson, True's father, would be joining in on the Mother's Day plans. It's also not clear whether she's implying that her family members could have "special plans" in store for her first Mother's Day or if Thompson may have something up his sleeve.

While Kardashian hasn't explicitly addressed their relationship since the cheating rumors started, she and Thompson were seen going to the movies together in Cleveland this week, so they might not be on bad terms. Kardashian was also seen at the Cleveland Cavaliers playoff game on Saturday, presumably to support Thompson and his team.

An unnamed source recently told Us Weekly that Kardashian and Thompson are "fully back together," despite reports that he cheated on her with multiple women. The Daily Mail released footage only days before Kardashian welcomed True that reportedly shows Thompson kissing a woman who isn't Kardashian while in New York City in April. TMZ also shared a video that purports to show Thompson with two other women at a Washington, D.C. hookah lounge in October.

Whatever happens between Kardashian and Thompson, though, it sounds like both of them are dedicated to co-parenting their daughter. Thompson was reportedly there when Kardashian gave birth to True last month. Kardashian was also joined in the Cleveland delivery room by Kris Jenner, Kim and Kourtney Kardashian, and her friend Malika Haqq.

Kardashian also shared a photo last month of a room covered in pink balloons and flowers, and it sounds like the baby is being showered with love. The new mom wrote on Instagram,

Our little girl, True Thompson, has completely stolen our hearts and we are overwhelmed with LOVE. Such a blessing to welcome this angel into the family! Mommy and Daddy loooooove you True!

In a separate post on her app and website, Kardashian has also shared her feelings on paparazzi photos of her that were taken after she gave birth. She revealed that she's getting back to working out after giving birth, after getting the go-ahead from her doctor. Kardashian has also shared the baby books she wants to read to her daughter. She may be getting back into the routine of her pre-baby life, but she's spending plenty of quality time with True, too.

The post about her Mother's Day plans isn't the only thing Kardashian has shared about the holiday, either. She also posted a Mother's Day gift guide and a flower tutorial that could be used for a Mother's Day arrangement. It sounds like the holiday holds a special place in her heart, even if she's not totally sure how she'll be spending the weekend.

Whether or not Thompson joins Kardashian this Sunday, it sounds like she'll have a sweet Mother's Day just spending time with True. Sometimes, the best days don't require anything fancy — so if she wants to spend the day "hibernating" with her daughter, that's totally her right.

More like this
Khloé Kardashian & Tristan Thompson Welcome Their Second Baby Via Surrogate
By Grace Wehniainen
Who Is Camila Cabello Dating? She's Getting Cozy With Lox Club CEO Austin Kevitch
By Radhika Menon
Kim Kardashian & Pete Davidson’s Relationship Timeline From Start To Finish
By Jordyn Tilchen and Bustle Editors
'A League Of Their Own' Star Abbi Jacobson Is Engaged To Jodi Balfour
By Jake Viswanath
Get Even More From Bustle — Sign Up For The Newsletter