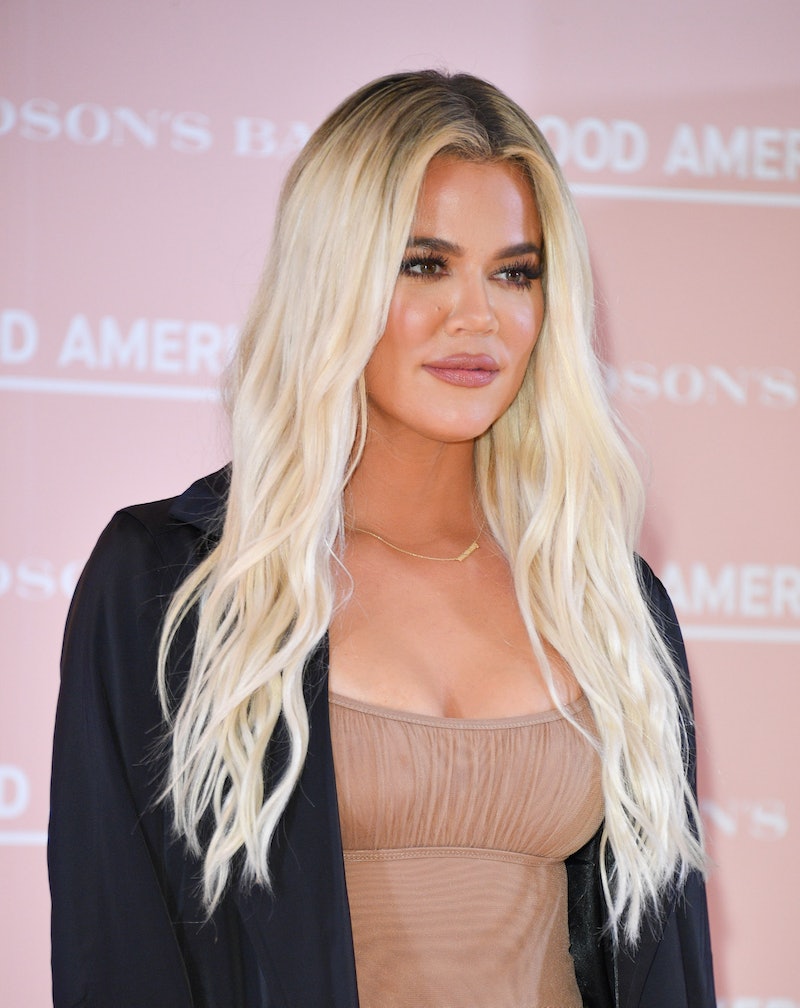 Stop what you're doing because there has been a major Kardashian hair change. Yes, for real this time, and no, Kim and Kylie aren't rocking bobs again. Instead, Khloe Kardashian is brunette, and those are likely the audible gasps of her longtime fans you're hearing out in the Kardashian-centered universe.

At this point, Kardashian is iconically a blonde. The youngest Kardashian sister began her transition to the platinum color all the way back in 2014 and has been getting more and more bright ever since. Now, it's just kind of her thing. While all of her other sisters tend to wear their hair dark, Kardashian has remained blonde throughout the years, but thanks to a new collaboration with sister Kim Kardashian West's KKW Fragrance brand, things are looking quite different for Kardashian.

On Oct. 29, Kardashian West took to her Instagram and Twitter accounts to announce the release of three new KKW Fragrance scents, each one representing one of the three Kardashian sisters: herself, Khloe, and Kourtney. For the launch, of course, the three sisters participated in a campaign together, and that's where fans got to see Khloe return to her brown roots.

In the photos, the Kardashian women look more alike than ever, and it's partially thanks to Khloe's dark hair.

Before you get a little too stoked that Kardashian is changing up her look, the hair is likely just a believable wig. Hair stylist Chris Appleton was the man behind the hair, and according to his post, the brunette was done only for this shoot. Kim Kardashian West also said the same on her Twitter explaining that while she loves Khloe brunette, this was for the campaign. Plus, per Kardashian's most recent IG posts, she's rocking her signature blonde 'do.

Regardless of the fact that Kardashian's hair isn't actually brunette IRL, seeing her back in brown is a total fall vibe.

As for the fragrance, the scents were created individually by each sister. If you've ever wondered what Kourtney and Khloe smell like (you already know Kim's signature scent. It is her line, after all), you can now find out when the KKW Fragrance Diamonds Collection launches on Nov. 8 at 12 p.m. PT.

Could Khloe Kardashian's brunette hair makeup a comeback? Fans will have to wait and see, but now every knows that Khloe K can rock any look.

More like this
Blake Lively Debuts Red Hair For The 'It Ends With Us' Film Adaptation
By Olivia Rose Rushing
The Best Beauty Looks Spotted At Paris Couture Week 2023
By Audrey Noble
Hailey Bieber's New Bob Is Short Haircut Goals
By Olivia Rose Rushing
J.Lo's Micro-French Manicure Has A Fun, Sparkly Twist
By Olivia Rose Rushing
Get Even More From Bustle — Sign Up For The Newsletter
From hair trends to relationship advice, our daily newsletter has everything you need to sound like a person who’s on TikTok, even if you aren’t.