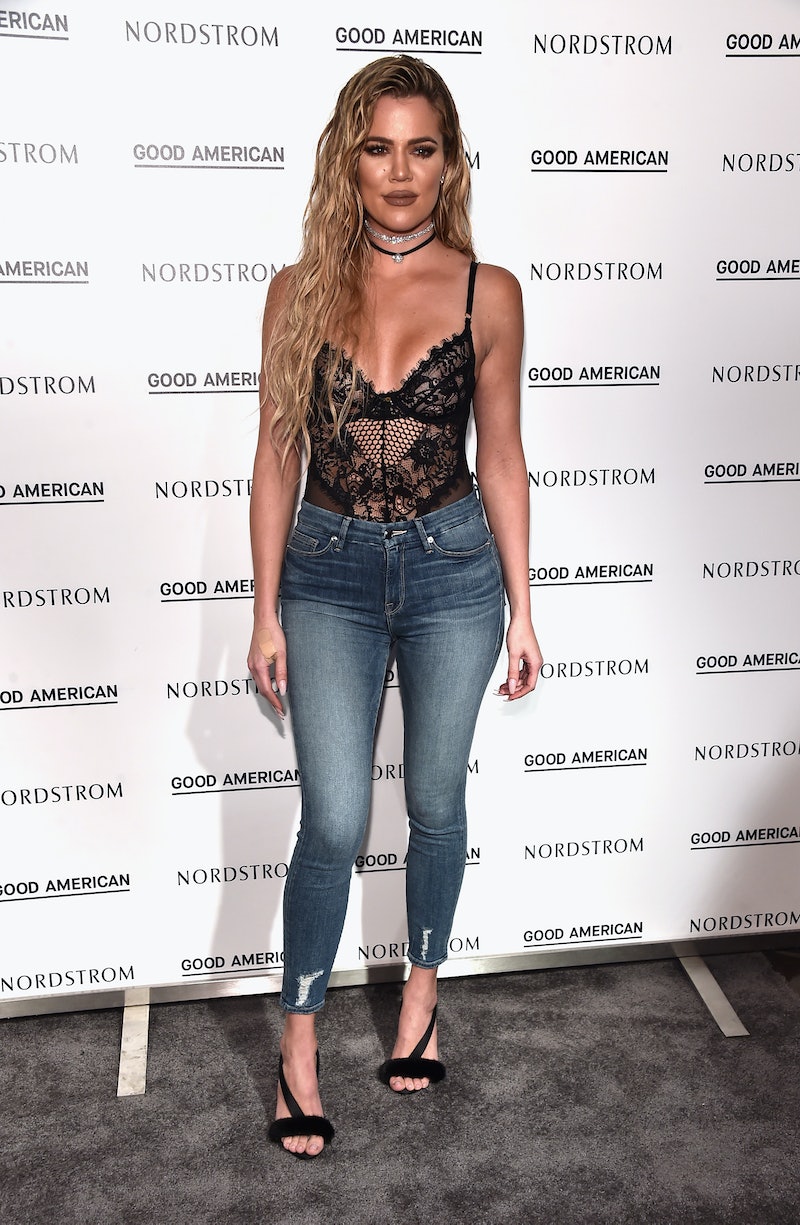 Just in time for Kardashian-Jenner holiday festivities, Khloe Kardashian confirmed her pregnancy via Instagram — and ever since, her baby bump has been the main attraction at family functions. But Khloe Kardashian's New Year's Eve outfit was all about a classically glam look, rather than giving fans another pregnancy teaser photo.

The blonde bombshell known so well for showing off hips, thighs and cleavage is rocking a new curve these days. Dazzling in a glittery, fringe-adorned jumpsuit that she wore to Kris Jenner's Christmas Eve Party, the mom-to-be looked so proud to show off her tummy in an Instagram post pre-party, focusing on her added curve before revealing the rest of her sparkly number. To ring in 2018, mama Koko was back at it again with a slightly different fur coat, this time pairing it with a simple, black dress.

Before revealing her NYE outfit to the world, Kardashian first took to Instagram to share a photo of her "final glam of 2017," which included big, blonde curls, a golden smoky eye look, and glossy nude lips. "We wanted something fabulous and festive. We are saying so long to the year in a glam way! Be safe tonight!!" she captioned the hair and makeup pics. It wasn't until a few hours later that she revealed the rest of the look on Snapchat — alongside her boyfriend Tristan Thompson — which turned out to be just another dose of the aforementioned glam.

It's Khloe Kardashian on a whole new level, glowing like never before.

Although big sis Kim K tends to get a lot of the praise as the family's fashion icon, Khloe Kardashian deserves some shine. Her Instagram feed is a gallery of endless good hair days, flawless makeup inspo, and so many jaw-dropping style moments.

Her NYE ensemble was no exception, garnering millions of likes and thousands of comments on the 'Gram in a matter of minutes — and she didn't even have to post the entire outfit. It really should be a crime for someone to slay this hard.

But then again, Khloe Kardashian always rocks some of the hottest outfits. Since regaining confidence in her looks and going blonde, Kardashian has upped her fashion game tremendously in the past few years. These days, she's no stranger to over oversized furs, slinky bodysuits, and anything that hugs her curves. Naturally, her NYE outfit would fall in line with the sultry numbers she's always werking.

Fans had been looking forward to Kardashian's New Year's outfit since the day after Christmas, when she confirmed her pregnancy by tweeting that she'd be at the six month mark on Dec. 31. They knew she'd likely be making a public appearance on the last day of 2017, which meant another chance to get a glimpse at Kardashian's pregnancy style.

Fortunately, Koko hasn't been camera shy since she has been expecting, like her possibly pregnant baby sis Kylie Jenner. Earlier on New Year's Eve, paparazzi snapped photos of Kardashian looking equally glamorous in a black, velour tracksuit and pair of tan boots as she got ready to board the plane to Cleveland to meet up with Thompson. It was the perfect teaser leading up to her fire look for the big party on New Year's Eve.

If there's one thing this NYE flick proves, it's that the KUWTK star is not giving up her usual ultra sexy, glam style anytime soon. She's already spoken out against people pregnancy shaming her for working out, so clearly she's not letting any other outdated tropes about being a mom get in the way of living her life. Happy New Year, Koko.