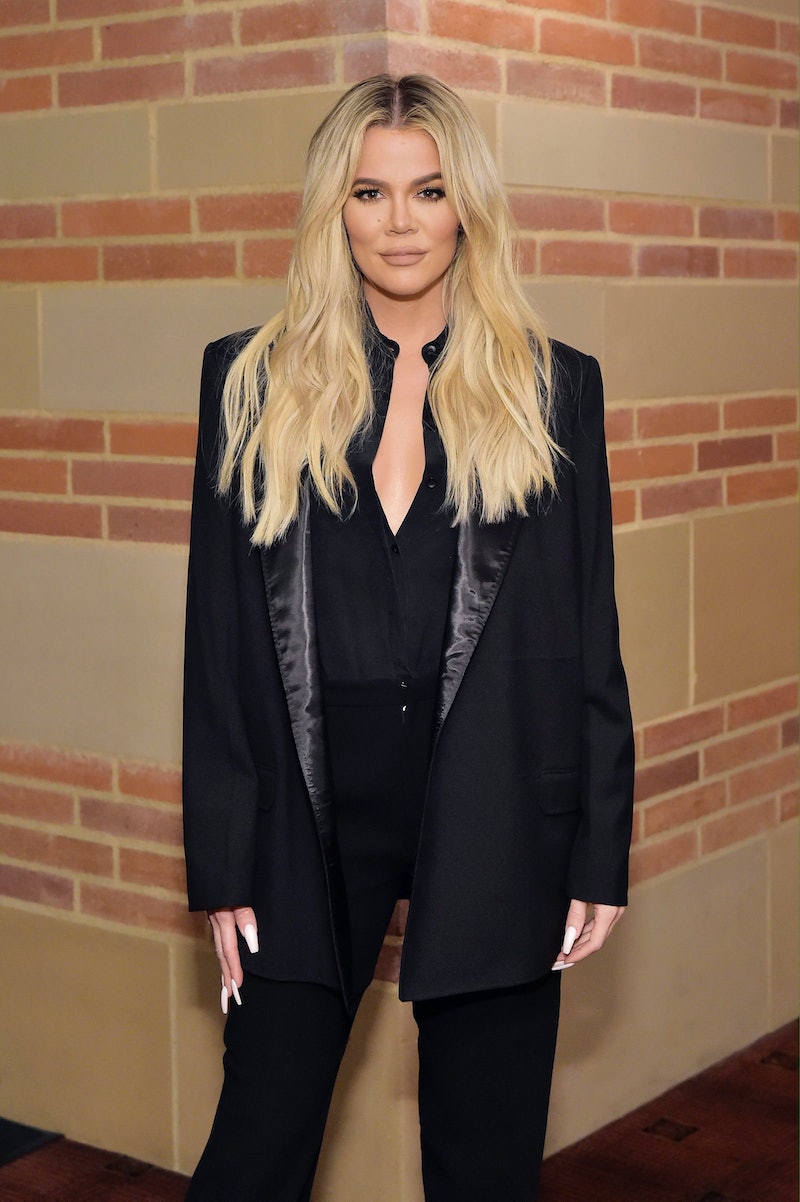 Over the weekend many celebrities spoke out about out about the murder of George Floyd on social media, and on Sunday, Khloe Kardashian posted a statement about Black Lives Matter on Instagram. Kardashian wrote that she had, "written or rewritten" the post many times, and though, "words feel empty," she said, she could not "sit silently."

Last week, a video of Minneapolis police officer Derek Chauvin standing with his knee on George Floyd's neck for eight minutes, resulting in Floyd's death, inspired protests against police brutality across the United States. Many public figures have spoken out about George Floyd, racism in America, and white privilege in response to the incident.

On Sunday, Kardashian joined those posting on social media, saying that she was, "angry, heartbroken, and disgusted," about George Floyd's murder on Instagram. She then pledged to take some part in the work ahead in the fight for equality. "I remain hopeful that we can get justice for George and his family and for every Black American who has been murdered, mistreated, and abused," she said. "I will do my part."

The reality star also acknowledged that she is privileged in "more ways than one," but said she wanted to use that privilege to speak up, and speak out about racism "fearlessly and louder than ever." She wrote: "I will stand with you, as together we fight for what's right." Kardashian also promised to, "vote for those who stand for equality and justice." Finally, she urged fans to take action and, "sign petitions, text and call, talk to your friends or family about whats going on, protest demonstrate, cry, scream, and shout."

Kardashian's statement, while making a point to explicitly call out racism, did not go as far as to reveal what specific actions the reality star planned to make beyond voting and posting. On Twitter, Kardashian retweeted a list of resources for those looking to take action, but did not specify which action she might choose.

Some fans have criticized the reality star's failure to make a public real actions or financial contribution to a relevant cause. One account responded to Kardashian's post on Twitter, writing, "How much did you donate? Post proof!" Another user noted that the Kardashian-Jenners had a habit of not showing up, writing, "i haven’t seen one kardashian/jenner at a protest. lmfao. y’all ran outta pepsi?"

Other celebrities made more tangible financial commitments to fighting police brutality and racial injustice. Chrissy Teigen pledged $200,000 to bailout funds for protestors nationwide, as per CNN, while Don Cheadle, Steve Carrell, Kehlani, and Janelle Monáe were also among those contributing to bail funds for protestors. Meanwhile, Blake Lively and Ryan Reynolds gave $200,000 to the NAACP Legal Defense Fund.

Many public figures also attended various protests to speak up against police brutality, according to Entertainment Weekly. Tessa Thompson, Timothee Chalamet, Ariana Grande, and Halsey were all spotted at protests, and shared their experiences on social media. It's unclear if Kardashian plans to participate in an upcoming protest or make a public contribution, but fans will be watching to find out.

More like this
Khloé Kardashian Writes Touching Instagram Tribute To Tristan Thompson’s Mother
By Alyssa Lapid
Kourtney Kardashian's Daughter Penelope Rates Mason’s Sneakers On TikTok
By Alyssa Lapid
Kim Kardashian’s Son Saint Had This Unique Request From The Tooth Fairy
By Alyssa Lapid
North West Will Make Her Acting Debut Alongside Mom Kim Kardashian
By Radhika Menon
Get Even More From Bustle — Sign Up For The Newsletter
From hair trends to relationship advice, our daily newsletter has everything you need to sound like a person who’s on TikTok, even if you aren’t.