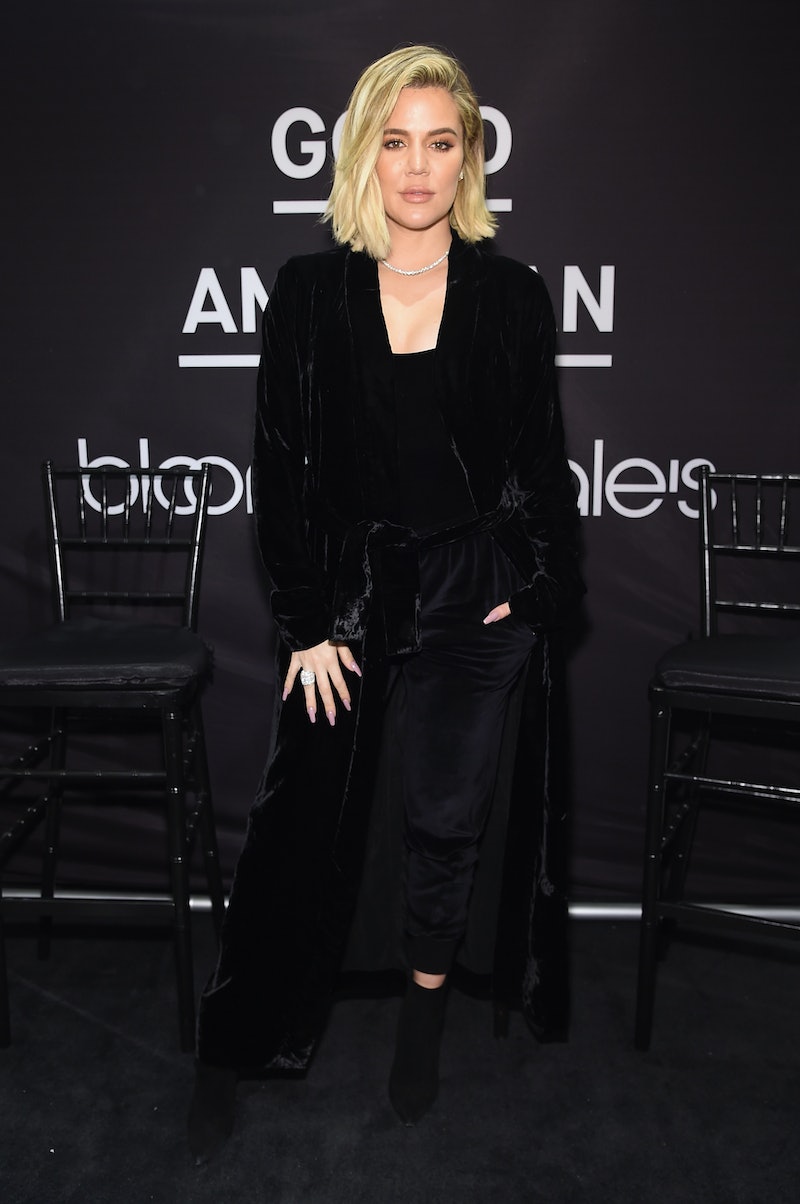 Over the last few years, the supreme social media pages of the Kardashians have transitioned from featuring Hollywood glitz and glamour (and the occasional detox tea ad), to featuring Hollywood glitz and glamour and babies — lots of them. And on Sunday morning, Khloé shared a video of True Thompson's adorable baby giggle for the world's enjoyment. There's no embellished designer bag or skincare endorsement included — the post is simply a display of pure mommy-daughter joy, which is priceless.

A grainy black and white filter overlays the post, giving it an earnest home video feel. Khloé's in sweats with messy hair and minimal makeup, and True is in her baby undergarments, as if they're ready for bed or just woke up to enjoy a slow morning together. True is crawling (!!!) toward her mom's phone — the device is way more captivating than any children's toy — and Khloé pulls her away, sending True into a fit of giggles as she slides across the plush carpet in her mommy's hands.

"That's my phone!" Khloé laughs, as she grabs True and pulls her away. Little does True know, she's on candid camera. She remains persistent, and as soon as her mom lets go, like a sling shot, she catapults forward as fast as her adorably round legs will allow. And after a few failed attempts, she tackles the phone, the camera looking up at her victory.

Khloé can't help but laugh and swaddles her in a big hug before attacking her with kisses, which sends True into even more joyous laughter. Once you click play, you can't watch the video just once. And by its end, you'll realize that you're grinning from ear to ear.

The post comes after the pair joined the rest of the family for a day of magical celebration at True's cousin, Chicago's first birthday party. The event was Alice in Wonderland-themed and was complete with some insanely accurate decor. A rose-embellished hedge archway welcomed guests, there was an impressively sized hedge maze, and the three-tiered cake was adorned with images from the movie — the Cheshire Cat, the White Rabbit's pocket watch, and the Mad Hatter's teapot. Alice and The Queen of Hearts themselves even made an appearance.

It's hard to believe that Chicago is already a year old, and that Kim and Kanye are expecting their fourth child via surrogate. Next, the family will be celebrating Kylie Jenner's daughter, Stormi's first birthday, and then True's. Stormi is 11 months old and True is nine months. And if they're going to top Chicago's party, planning should already be underway, because her bash was quite impressive.

Just two months ago, True said her first word, "Dada," per E! News. Now, she's crawling and giggling and chasing her mom's smartphone. Before we know it, she's going to be walking and talking with the rest of the Kardashian kids. Fast-forward a couple of decades, and they could be the ones starring in Keeping Up With The Kardashians. The sisters knew what they were doing when they decided to have kids so close together. Someone has to keep the empire alive, right? And if True's so fun to watch on video now, she's bound to be just as entertaining in the future.