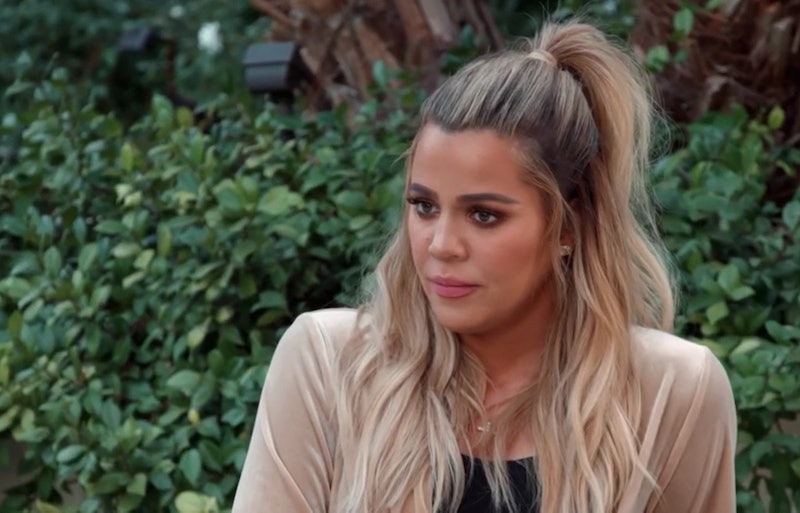 Kylie Jenner's pregnancy was one of the greatest mysteries of modern history, and fans weren't the only ones anxiously awaiting the reality star's official announcement. In this week's episode of Keeping Up With The Kardashians, it was made clear that Khloé waited to reveal her own pregnancy until she knew how Kylie was going to handle hers.

The episode shows Khloé going to great lengths to avoid being seen in public before the sisters figured out how the announcements were going to look — she was bailing on events, ordering days' worth of groceries to her home so she didn't have to leave to buy anything, and wearing baggy clothes when she does finally sneak out with Kim for some fun.

Kylie's pregnancy announcement, as all dedicated fans will know, didn't come until after Kylie actually gave birth to Stormi — she said she wanted to go through her pregnancy privately in order to keep herself and her baby as healthy as possible. But until that decision was set in stone, Khloe only had her younger sister's interests at heart, and fans loved how considerate she was to make sure she didn't steal any of Kylie's thunder.

Finally, late in the episode, as Kim and Kylie give a joint interview to the camera, Kylie decides to let Khloé know once and for all the the floor is hers to do whatever she wants. "I don't think I'm ever going to announce that I'm pregnant. Never," she tells Khloé over the phone. "I just don't wanna be in the spotlight, I'm just gonna be low key. So we think that you should go ahead. You don't have to wait for me, it's exciting."

Khloé quickly takes her up on the offer and shortly after posts a photo to Instagram of herself, her boyfriend Tristan, and her pregnant belly. The real-life announcement came in December of last year, about a month and a half before Kylie divulged any information on Stormi's birth, so it seems like the sisters successfully worked out exactly how they wanted to do things. "It's finally real. I'm really pregnant," Khloe says after the post is a done deal. "The reaction has been 99 percent over the moon and I couldn't be more thankful."

It's sweet that Khloé wanted Kylie to have her moment in the spotlight if she had ended up wanting to do a big, elaborate pregnancy announcement, but also, who really would have cared if they had overlapped or Khloé had announced earlier? Kardashian fans are hanging on their every word already — the scheduling of their Instagram posts wouldn't have changed that. Sometimes it's easy to see how the family can create its own media frenzy.

In any case, this family is nothing if not meticulous in their social media planning, and their carefully curated public images, and it seems the chronology of pregnancy announcements requires the same level of care. It definitely doesn't seem like any Kardashian-Jenner is making big moves on social media without consulting a few dozen people.

Though neither have been born on the show just yet, Stormi and True have now both arrived, along with Kim's newest addition, Chicago. And after months of speculation, secrecy, and fan theories, KUWTK is ready to pull back the curtain for viewers who are dying to know how all the baby drama played out.

More like this
Julia Haart’s New Company Haart Sphere Still Doesn’t Seem To Exist
By Brad Witter
Twitter Is Saying The Same Thing About Jill Scott Winning 'I’m A Celeb'
By Sophie McEvoy
Are Kayla and Seb From 'Too Hot To Handle' Still Together?
By Karen Fratti
BBC’s Gladiators Reboot Is Staying Close To The Original ‘90s Phenomenon
By Sophie McEvoy
Get Even More From Bustle — Sign Up For The Newsletter