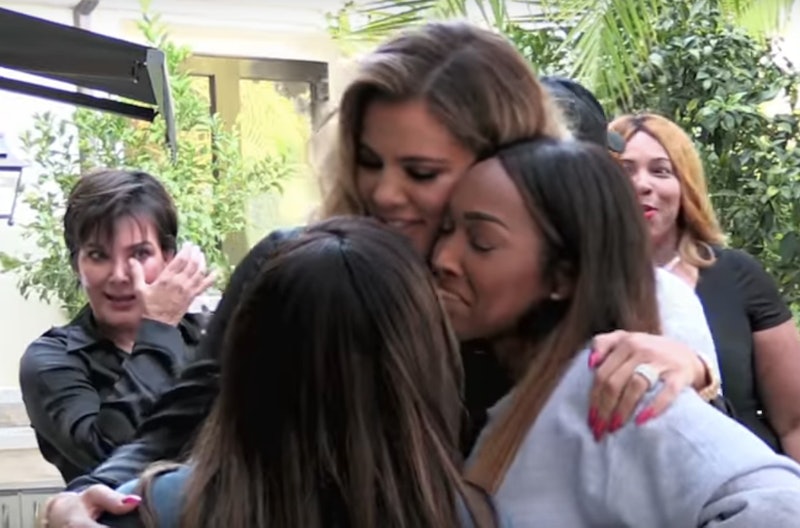 If you're a Keeping Up With the Kardashians fan, here is some exciting news: Khloé Kardashian's pregnancy will be featured on KUWTK. After a fan asked her if her pregnancy announcement will be seen on the show, the 33-year-old reality star confirmed on Twitter Friday, "Yes! It all happened during production so yes! Super cool to have that documented."

She didn't share any other details about how or when it will be showcased, but it's safe to assume that it will be seen during the second half of Season 14. On Dec. 18, E! released a trailer (below) for the rest of the current season, which will begin on Sunday, Jan. 7. Near the end of the teaser, Kris Jenner and Kardashian's close friends, Malika and Khadijah Haqq, become emotional over something they just learned. The Haqq twins even hug Kardashian after whatever they heard. At one point, Kim Kardashian asks her mom, "Did you not know?"

Based on this brief clip and Kardashian's recent Twitter confirmation, it seems more than likely this scene is when the Revenge Body host reveals her pregnancy to those dearest to her.

However it happens, it will certainly be exciting to watch. To know that fans will get to see her pregnancy journey in some capacity is thrilling. They've been kept in the dark for so long (and understandably, because that was Kardashian's choice to announce it when she was absolutely ready to), so this is a great gift to them.

It's unclear how much of her pregnancy will be featured, but there's a good chance a great deal of it will be. The Kardashian-Jenner family has always been extremely open with their viewers in all areas of their lives, including pregnancy. However, what she wants to be seen on television is, of course, up to her and Tristan Thompson, her boyfriend and the father of her first child.

Either way, and as you can see below, her fans are just happy that the pregnancy announcement was filmed.

On Wednesday, after months of speculation, Kardashian officially confirmed her pregnancy on Instagram with a photo of her baby bump. Next to the sweet photo, she wrote, "My greatest dream realized! We are having a baby! I had been waiting and wondering but God had a plan all along." She also thanked her fans, especially those who have been so patient:

Thank you to everyone for the love and positive vibes! I know we've been keeping this quiet but we wanted to enjoy this between our family and close friends as long as we could privately. To enjoy our first precious moments just us Thank you all for understanding. I am so thankful, excited, nervous, eager, overjoyed and scared all in one! But it's the best bundle of feelings I've ever felt in my life!

Thompson is also overjoyed and can't wait to have a baby with Kardashian. According to People, he commented on her Instagram,

My love, Thank you for allowing me to be apart [sic] of your journey and entering your life that day at the bel air hotel. One of the best moments of my life. I’m soo happy to be on this journey together with you and creating this angel from the man above. Everyday [sic] I give thanks to him for bringing us together. I love you soo much and I know our little angel feels the love we share together and will know that mommy and daddy loves them unconditional and forever and ever amen.

It's safe to say they are thrilled to become parents.

As wonderful as it was to finally learn Kardashian will soon become a first-time mom, learning that she'll announce her pregnancy on KUWTK is even more exciting.