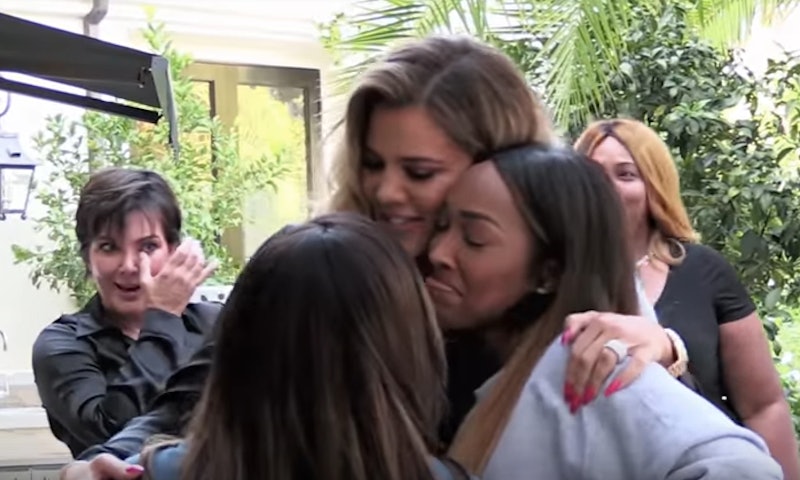 The midseason finale of Keeping Up With the Kardashians Season 14 airs this Sunday, but a new preview for the second half of the season might reveal that Khloé Kardashian will confirm her pregnancy on the show. In a trailer for the second half of the season, which will begin on Sunday, Jan. 7 at 9 p.m. a lot goes down, but what stands out most comes at the end. During what appears to be a party for family and close friends, everyone gasps and says "What?!" Then, Kris Jenner says that she didn't know something unspecified when Kim Kardashian asks, "Did you not know?" After that, Kris, as well as Khloé's friends Malika and Khadijah Haqq are shown crying. Could it be because she just told everyone at once that she's pregnant?

Of course, it could be totally something else they're excited for, but with all of the rumors that Khloé is pregnant it's hard to ignore that a pregnancy reveal could be what's happening here. There's also a chance that whatever her family and friends are freaking out over may not even involve Khloé. Maybe the teaser is focusing on Khloé to throw fans off of the scent of what really occurred? Who knows, but the moment is definitely intriguing.

News of the Revenge Body star's reported pregnancy was initially revealed in September by Us Weekly — and only four days after TMZ reported Kylie Jenner is reportedly expecting her first child with her boyfriend, Travis Scott. At the time of the report involving Khloé, Bustle reached out to her rep and Tristan Thompson's agent for comment, but didn't receive an immediate response. They have yet to either confirm or deny the rumors. As for Kylie, at the time of TMZ's report, her rep couldn't be reached for comment.

There's always the chance that Khloé will confirm her reported pregnancy with help from the 2017 Kardashian Christmas card. Fans have speculated that both she and Kylie will use the card as a way to announce they are both pregnant. Starting Dec. 1, Kim has been unveiling one new image from her family's holiday card. On Wednesday, Khloé was finally featured and her first appearance raises a lot of questions.

The 33-year-old reality star doesn't appear to be pregnant, but that doesn't mean anything. This particular photo could've been taken before she got pregnant or it was possibly taken while she was pregnant, but hardly showing. Remember, everyone's bodies are different. Or, you know, maybe on Christmas Day when the card in its entirety will presumably be revealed, Khloé will be seen pregnant. Really, anything is possible, especially since this year's Christmas card is kind of confusing. The photos seem to be puzzle pieces, but they don't appear to fit together to create the final product, as some might imagine they would.

Ever since the pregnancy rumors first began, there have been many clues that seem to suggest Khloé really is pregnant. On many occasions, she has referred to Thompson as "daddy", which could either be a nickname or her way of saying they're having a baby together. Then, there was another time when the NBA player reportedly used a male gender symbol emoji in response to one of Khloé's Instagram's, which may or may not suggest they're having a boy.

Maybe her fans are reading too much into all of this, but a lot of people remain convinced she will soon welcome a child. Between the KUWTK promos, the Christmas card teasers, and the supposed clues across social media, it's hard to get past the rumors that Khloé is pregnant.