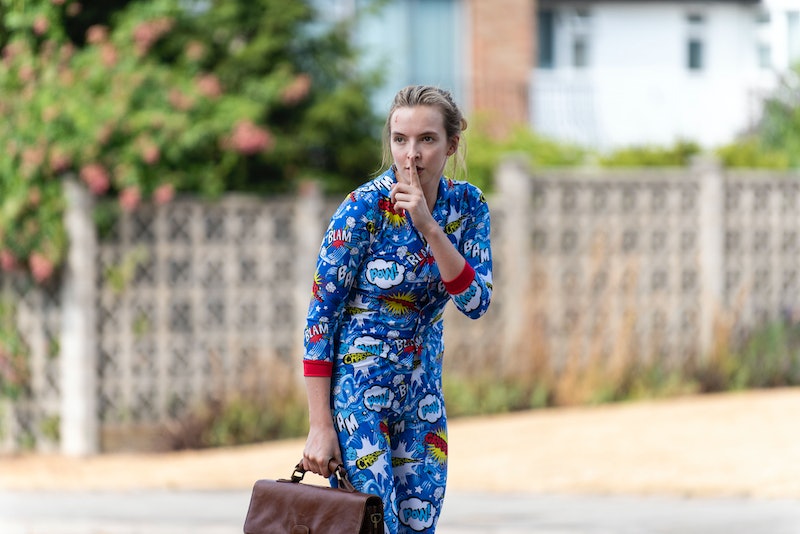 It's easy to get hooked on a new series, but it's even easier to fall head over heels for characters' clothes. As a fashion lover, I often find myself researching the origins of specific looks and budget-friendly alternatives to add to my own wardrobe. It happened with the effortlessly stylish Josephina in Netflix horror Velvet Buzzsaw and with that famous Fleabag jumpsuit but, most of all, it happens with the best female assassin to ever hit TV screens. Turns out I'm not alone because a link has been established between Killing Eve's Villanelle and a rise in eBay fashion searches.

Not just any and all fashion searches, but ones relating to Villanelle's killer (pardon the pun) ensembles. As Harper's Bazaar reports, eBay has noticed a surge in searches for the likes of humongous gold earrings, mourning-style lacy looks, and, yes, even those cartoon pyjamas. And they've all occurred since the second season of the hit BBC series aired.

This will come as no surprise to fans of the show. In the first season, an obsession with Villanelle's puffy pink Molly Goddard dress catapulted the character into sartorial stardom. That was followed by a craze for sharply tailored suits worn specifically to a nightclub. Now, people can't get enough of Villanelle's new looks which, as always, are used for the most epic disguises.

The biggest eBay rise is related to the absolutely massive gold earrings the Russian assassin wore in Amsterdam while writing a postcard to MI5 spy Eve. A 48% search increase was seen with people clamouring for a copy of the vintage '80s Christian Lacroix style.

Fans have also been keen to recreate the mourning dress Villanelle wore to Eve's house. The real thing, Elle reports, was a 2012 couture Alexander McQueen gown, eBay users have results in a 20% search rise for black lace blouses. The auction site also noted that one search every two minutes was for green blazers; similar to silky Villanelle's Jason Wu coat.

But the most eye-opening statistic concerns the children's pyjamas Villanelle stole from a fellow hospital patient. According to eBay, searches for pop art pyjamas have soared by 16%. Originally, they were supposed to be covered in a Spider-Man print, costume designer Charlotte Mitchell told Elle, but the team "realised very quickly that Spider-Man is heavily branded and we didn't think Marvel was going to allow us to use him." So Mitchell made the shrunken pyjamas from scratch instead.

As the Guardian reports, people aren't just searching for cheaper replicas of Villanelle's wardrobe. Some are actually buying the real designer styles. Fashion psychologist Shakaila Forbes-Bell told the paper that parts of the assassin's personality appeals to women. Namely, her chameleonic ability to be whoever she wants. “We don’t want to fade into the background any more,” Forbes-Bell said, adding: "The easiest way to take charge is through your clothing."

Mitchell confirmed this attraction to Harper's Bazaar, saying: "Villanelle's wardrobe choices change so radically depending on her mood, which is up and down. She’s a psychopath at the end of the day; she doesn’t have any consistency." Psychopath or not, dressing for how you feel is an alluring concept to most women.