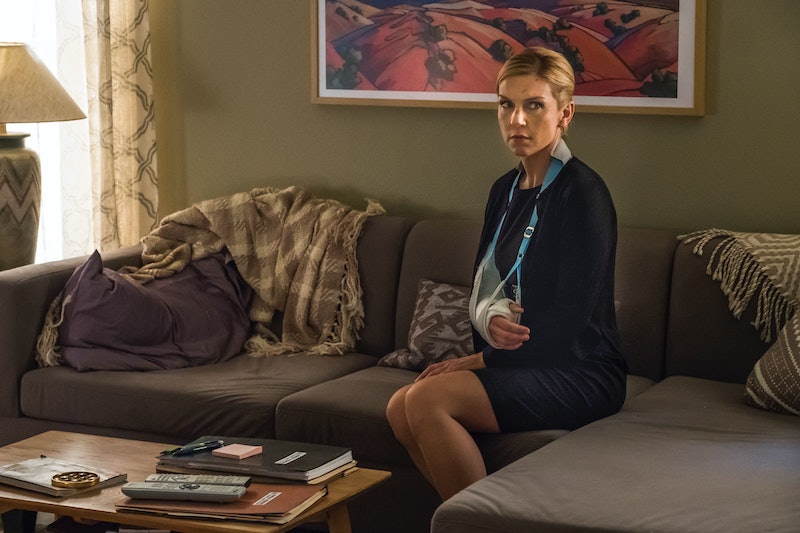 Jimmy McGill and Kim Wexler of Better Call Saul have never really had a conventional romance. And their relationship will be put to test in Season 4 (premiering Aug. 6) as Kim tries to support Jimmy on Better Call Saul after the death of his brother. This upcoming season of the Breaking Bad prequel was particularly difficult for her and co-star Bob Odenkirk to make, actor Rhea Seehorn says, speaking to Bustle at the AMC Summit in New York City in June. Because, along with their potential guilt about Chuck's suicide, Jimmy will eventually become Saul — and where Kim fits into that is still one of the major mysteries of the series.

"It was a profoundly intense and challenging season for the Kim Wexler character," Seehorn says. "When Jimmy is dealing with the death of his brother and as the audience sees this progression towards Saul, there are times when Kim has nowhere to go with her thoughts except in her head. And what happens to somebody when you have nothing to bounce something off of?"

Seehorn notes how Kim tried to express to Jimmy in Season 3 that she felt guilty for how they exposed Chuck's mental illness during Jimmy's disciplinary hearing with the New Mexico bar association. But her regrets must take a backseat to what Jimmy is going through. "When someone kills themselves, none of us would be able to not ask ourselves, 'What was my hand in this? Could I have helped? What happened?' But then she's got Jimmy grieving," Seehorn says. "And I think we've all been in places where your pain needs to be put on hold for someone else's pain."

It certainly doesn't help that Kim is not close to anyone else but Jimmy as they deal with the fallout from Chuck's death. "Pretty much Jimmy is her only confidant," Seehorn says. So as she gives Jimmy the space he needs, Kim ends up even more on her own. "There's a lot of scenes where it felt so special to me that the audience actually will be my closest confidant — in a lot of the scenes," Seehorn says. "There's a lot of silence where only the audience knows what she's trying to do or deal with."

Seehorn does say that, even with this distance, the couple will reach a new place in their relationship in Season 4. "We have relationship scenes that were different than anything we've seen on the other seasons," Seehorn says. "Highs and lows. The tiniest, smallest, most beautiful cinematic little scenes where you're trying to somehow get your partner to realize where you're at and where they're at and you just barely keep missing each other ... and then also some scenes where they finally are mature enough to have some conversations that they haven't had and let out some emotions that they haven't been able to have. And just the desperation to stay anchored to something and to anything."

Seehorn becomes visibly emotional while talking about Kim and Jimmy's relationship in Season 4, and acknowledges it. "Bob and I talked this season that there were scenes and episodes that were very sad for both of us," Seehorn says. "They were challenging and Bob did them beautifully. They're beautiful scenes and they are hard to play and hard to watch."

The sadness Seehorn and Odenkirk feel for their characters comes in part from knowing that Jimmy will someday soon not be Jimmy McGill. "When you see glimpses of Saul, it's a man without a conscience and we just weren't ready to say goodbye to Jimmy and it made me sad for Saul," Seehorn says. "I was thinking the other day if I went back to watch Breaking Bad now, I would have a tremendous sadness about Saul and curiosity of, 'Is this a mask you wear and then you go home and you're actually a deeply depressed man? Or, did you become him and that's it?'"

Whether Kim will be a part of Jimmy's life once he's Saul is something Seehorn can't answer. "There's always going to be the question of, 'Did someone run away from something or run to something?'" Seehorn says. "Let's say she's not in Breaking Bad in any fashion — does that still mean she's out of his life? I don't know. If she is, what's the most tragic way that happens? I don't know. Or is it a tragedy at that point to not be there?" Seehorn questions with a laugh before adding another, "I don't know."

Although many fans can't believe that Kim would ever put up with Saul, Seehorn is not so sure that Kim would absolutely leave Jimmy because of that. "She is very different than the first episode we saw her in the pilot. So I don't know where she will be when he gets to where he's gonna be," Seehorn says. "Like they did so brilliantly in Breaking Bad, it's much more human and accessible to people to see somebody not just suddenly do a horrible thing. It's about taking really small left turns over and over until you realize you dug yourself a hole. So I don't think Kim even knew she was going to be where she is now."

"People say, 'Well, how could Kim put up with Saul?' I'm like, 'Kim didn't see Breaking Bad.' So Kim is not putting up with Saul. Kim is taking things in present time what Jimmy is doing and oftentimes, the audience is privy to something Jimmy is doing that Kim is not," Seehorn says. "But thankfully, blissfully, they made Kim a smart character. It would have been terrible I think if they made her obtuse and dumb and she's being snowed by him. She's perfectly aware of many things about him."

"The whole thing's tragic," Seehorn adds with a laugh. "And it's weird that we're fascinated with watching something hurtle towards a wall that we've already seen it hit."