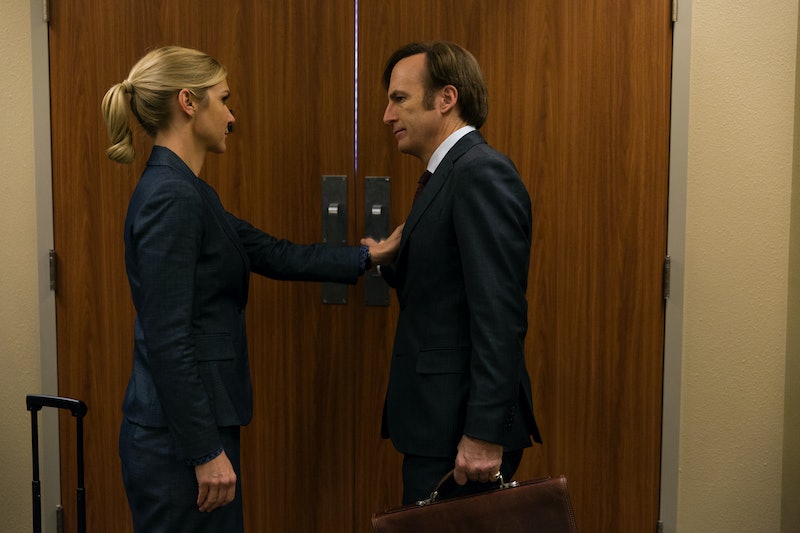 Although their lives are very intertwined — both personally and professionally — the relationship between Kim Wexler and Jimmy McGill is kind of ambiguous. But considering how important Kim is to Jimmy on Better Call Saul, it's completely understandable that viewers have wondered where she is during the events of Breaking Bad. Like with the portrayal of their relationship, Better Call Saul has been sparse on specific details when it comes to what happens between Kim and Jimmy in the future. Yet, the May 22 episode shows that their relationship is currently strained since Kim regrets what they did to Chuck during Jimmy's disciplinary hearing with the New Mexico bar association. Does that mean Kim leaves Jimmy on Better Call Saul eventually because of her guilt and their opposing moral views? "Expenses" definitely implies that could be a reason why she's not in Breaking Bad.

While part of me holds out hope that Kim and Jimmy are still together in Breaking Bad — but that she somehow avoids all of the Walter White shenanigans — the other part of me wishes for something better for Kim. And since the first Breaking Bad episode to feature Saul has him hitting on Francesca (his secretary in both shows), that seems like a pipe dream anyway. That's further backed up by "Expenses" since as Jimmy gets closer to becoming Saul, Kim appears to be less and less happy with their situation.

Kim was clearly shaken when Rebecca scolded Jimmy and her during the May 15 episode, "Off Brand," for how they treated Chuck on the stand during Jimmy's hearing. And Kim uncharacteristically snapping at Paige at Mesa Verde in "Expenses" confirms that she's not OK with how they defeated Chuck. After Paige says she read the transcripts from the hearing and takes pleasure in how Kim "destroyed" Chuck, Kim's guilt about the situation bubbles over. "As far as I'm concerned, all we did — all we did was tear down a sick man," Kim says.

In the Season 3 premiere, Kim also seemed to feel guilty about how she had acquired the client Mesa Verde. Although that had been Jimmy's fault, she now has been an active conspirator in bringing Chuck down. She indicates that she is struggling with what they have done in "Expenses" when she asks Jimmy if there could have been a different way to handle the bar hearing. Jimmy puts the blame all on Chuck and their varying viewpoints on this could be what tears them apart. Because while Kim is remorseful over exposing Chuck's illness as a mental condition in court, Jimmy is having the opposite reaction. Due to the financial setbacks he is facing because of Chuck, Jimmy reports Chuck's breakdown in court (through deceptive means, of course) to the malpractice insurance agent by the end of "Expenses." Based on how Kim has been feeling, there's no way she will approve of Jimmy playing so dirty and if Kim finds that out, it will most likely cause even more tension between these two.

In a Bustle interview with Kim actor Rhea Seehorn before Better Call Saul Season 3 premiered, she spoke about how she doesn't know where her character is during Breaking Bad, but that "I know that the Kim we first met couldn't deal with the Saul that we eventually see." Yet, she acknowledged that Kim in Season 2 got a thrill from playing along with Jimmy's cons. However, in "Expenses," she appears tired of those games. Sure, she is willing to come up with scenarios, but she doesn't really want to rip off people in the bar. It's just another indicator that Kim may leave Jimmy. "I guess I wind up asking myself, 'Well, it depends where on the path Kim is and where on the path Jimmy/Saul is,'" Seehorn said. "When that rift happens would be the only day that I'd be able to say what she would be able to accept and what she couldn't accept."

The number of things that Kim is willing to accept in Season 3 of Better Call Saul appears to be dwindling as she deals with the emotional fallout of hurting Chuck in court. As fans know that Jimmy will eventually morph into Saul, it's hard to imagine that these two will be able to find domestic bliss considering Kim seems to be a much more moral person — and so, the end of this couple may be near. And how ironic would it be that in beating Chuck in court, Jimmy eventually lost the most important person in his life?