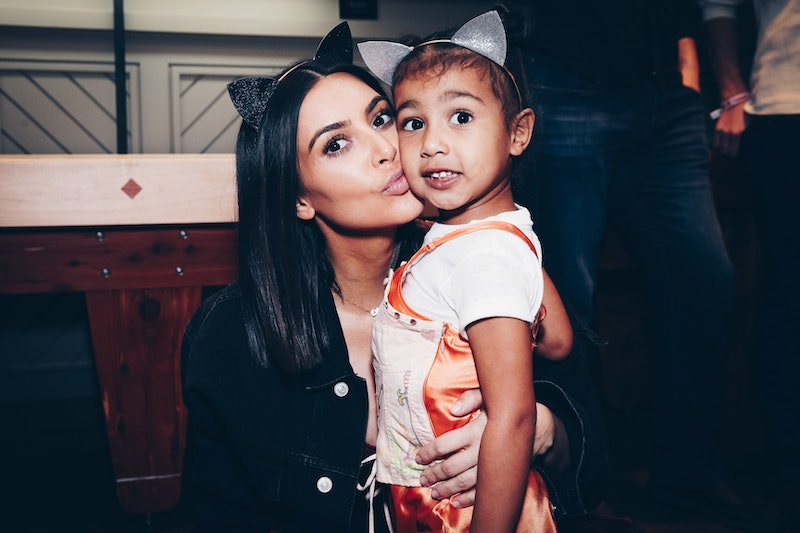 As any KarJenner fan knows, Kim Kardashian is mom to four adorable kiddos — North, Saint, Chicago, and Psalm West. But, is she planning on having more kids anytime soon? As Marie Claire noted, Kim Kardashian addressed whether she'd have more kids in an Instagram Q&A session, during which she answered with a straightforward message on the subject.

On Aug. 29, Kardashian decided to treat her fans to an impromptu Q&A, with the reality star telling her followers, "I've never done this before, so ask me anything!" Fans did as they were told and asked the KKW Beauty mogul an array of questions relating to everything from her favorite food to how her day was going. Additionally, one fan asked Kardashian whether she would want more children sometime in the future, to which she responded with a photo of two of her cute children, Saint and Chicago, along with,

"I LOVE my babies so much but 4 is all I can handle with how busy I am, and each one of my babies needs so much attention."

Considering that, on top of raising four kids, Kardashian is busy with Keeping Up With the Kardashians, her various business ventures, and studying for her law degree, she definitely has her hands full at the moment.

Kardashian's answer shouldn't come as too much of a surprise, especially considering that People previously reported that the reality star and her husband, Kanye West, were likely done having kids. In January, shortly after it was reported that Kimye was set to welcome their fourth child via surrogate, a source revealed that four children was the magic number for the couple. “Kim has always wanted four kids. She talks about it all the time,” the source said. “She likely won’t have any more after this.”

As previously mentioned, Kardashian and West welcomed their fourth child in May, with the KUWTK star announcing the news by writing on Twitter, "He's here and he's perfect!" According to People, the couple was aided by a different gestational carrier this time around (they also welcomed daughter Chicago via surrogate in January 2018) for a very specific reason. “Since they had another embryo, Kim and Kanye always knew they wanted to try and implant that embryo too,” a source told the publication, “They hoped to work with the same gestational carrier, but it didn’t work out this time. They are working with a second carrier now that is pregnant and will give birth in the spring."

As for how Kardashian is handling being a mom to four young kids, she pretty much has her hands full with them, just as the reality star said before. On Aug. 21, she took to Instagram to share a couple of photos from her Caribbean vacation with the family. But, as it turns out, capturing a photo of the whole crew together proved "almost impossible," as she wrote, "I thought taking a pic with three kids was hard OMG this is almost impossible!" Even though it may have been difficult to grab a snap of them all, the end result was a simply adorable series of photos featuring the Kardashian-West family.

So, just in case you were wondering whether Kardashian would be having more kids anytime soon, take it from the reality star herself: her hands are a bit too full at the moment to add any more adorable kiddos to the family.