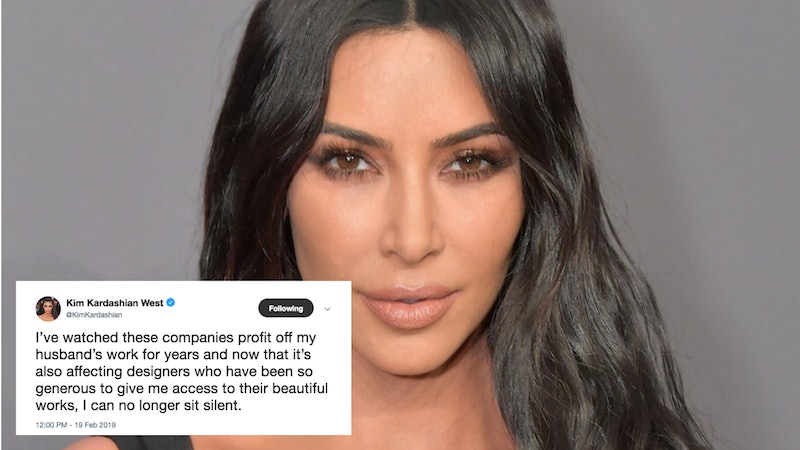 There's not exactly some huge secret about the fact that Kim Kardashian wears costly designs. From Givenchy to Versace, she has some seriously pricy pieces, but that doesn't mean she's down with brands ripping off those expensive looks. In fact, Kim Kardashian is criticizing fast fashion brands for copying designers' work, and she means serious business.

In a series of both tweets and Instagram story images, Kardashian took aim at affordable, fast fashion brands who have made it a habit of recreating her looks both ultra-quick and for much less money. The saga started when Kardashian wore a one-of-a-kind vintage, Thierry Mugler dress from 1998 to the Hollywood Beauty Awards with her hairstylist Chris Appleton. The strappy, cut-out dress was a showstopper, even for a risk taker like Kardashian, and her fans loved it.

Fast forward only a mere 24 hours later, and a recreation has popped up on the Fashion Nova Instagram account. In her series of tweets, Kardashian does not mention Fashion Nova but does state that a brand has recreated the look and "thrown it up on their site." Kardashian goes on to explain in the tweets that there is no relationship between she and brands that recreate her looks and that she can no longer "sit silent" as the recreations are beginning to effect designers (presumably like Mugler) who have allowed her to wear their work.

You can see Kardashian's tweets below.

While Kardashian's defense of the brands and designers she works with is admirable given that artists' original work should be protected, there has been a bit of controversy surrounding Kardashian's call-out of fast fashion brands.

According to popular Instagram account Diet Prada, frequent model for Fashion Nova Yodit Yemane posted an Instagram story of photo options from a shoot she did wearing the Fashion Nova Mugler recreation. Diet Prada stealthily noticed that the image options were dated for Feb. 14, four days before Kardashian actually wore the dress on Feb. 18. The photo files themselves were even named "Kim dress," according to the account. Of course, this led to speculation that Kardashian's claim to have no affiliation with the brands may not be truthful.

Fashion Nova is an ultra-fast fashion brand that is capable of executing design within hours and believes in fairness in pricing. We strive to offer our customers affordable leading trends. We respect the fashion community and work with a variety of vendors, designers, influencers, and celebrities to keep our style offering fresh and relevant. Kim Kardashian West is one of the top fashion icons in the world that our customers draw inspiration from. However, we have not worked with Kim Kardashian West directly on any of her projects but have been driven by her influential style.

While Fashion Nova also states that they have not worked directly with Kardashain, they have certainly been inspired by her. The Mugler replica is not the first time the brand has redone one of her looks. In fact, just over a week ago on Feb. 8, Kardashian posted a photo of herself wearing a gold, cut-out dress designed by husband Kanye West. The KKW Beauty founder captioned the image partially stating, "P.S. fast fashion brands, can you please wait until I wear this in real life before you knock it off?"

On the same day, Fashion Nova posted a replica design to their Instagram and appeared to slyly poke fun at Kardashian by tagging her.

As for whether or not fast fashion brands like Fashion Nova will listen to Kardashian's criticism or not is yet to be seen, but it is clear that Kardashian's style certainly influences their creations.