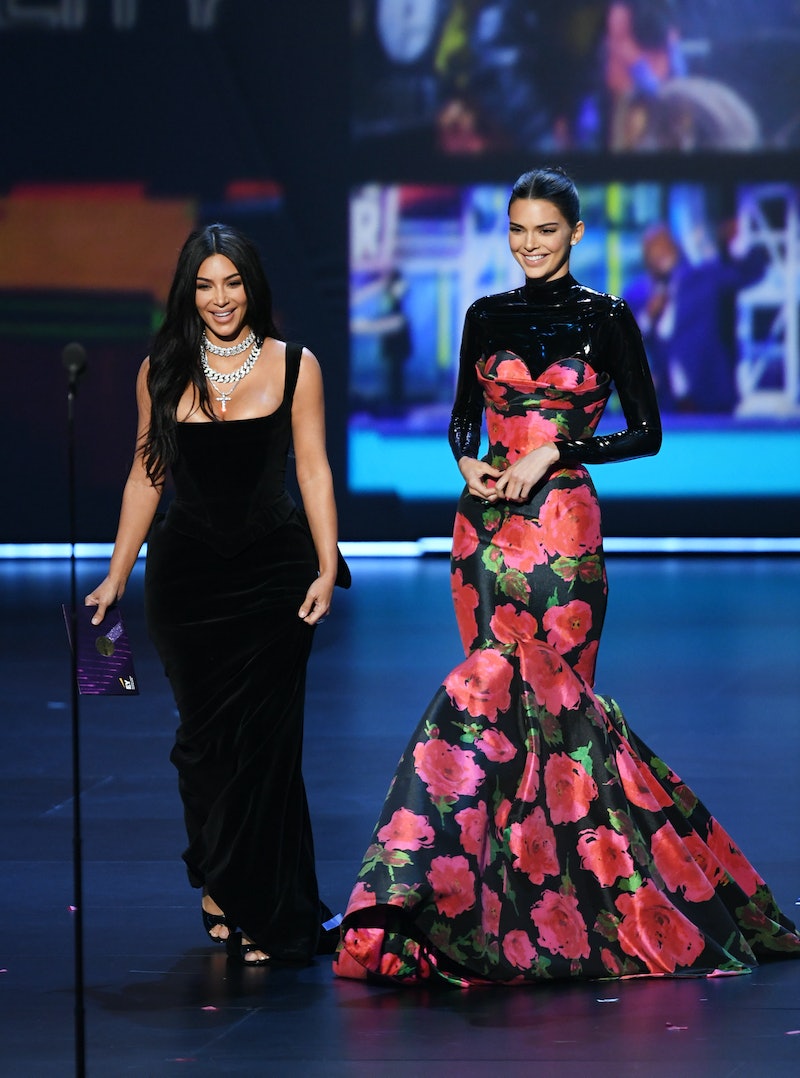 The 2019 Emmys were filled with upsets, fashionable looks, and more than a few laughs. One of those laughs was at Kim Kardashian and Kendall Jenner's expense when they presented the award for Outstanding Reality Competition Program during the Sunday night ceremony. According to a new report from Us Weekly, Kardashian and Jenner weren't in on their Emmys joke before taking the stage, but they didn't take the awkward moment to heart either.

Before presenting the aforementioned award, Kardashian and Jenner shared with the audience their own reality TV journey. Kardashian began, “Our family knows firsthand how truly compelling television comes from real people just being themselves.” Right after Kardashian spoke, you could hear some members of the audience letting out a chuckle about that line, before Jenner added, "Telling their stories, unfiltered and unscripted."

Many took to Twitter to voice their opinions about the uncomfortable Kar-Jenner moment. One person was caught off-guard, writing, "Ummmmm did the crowd really just laugh at Kim and Kendall when Kim said their family knows what it's like to be real people living their real lives????" Another said they felt "uncomfortable" with the whole thing. One fan even defended the sisters, saying that the audience was "rude and disrespectful" for laughing during their presentation.

While neither sister has yet to address the moment publicly, including on social media, Us Weekly offered up some background on the slightly awkward moment in a report on Monday afternoon. A source told the publication that Kardashian and Jenner "were not briefed" that the bit was supposed to be "a joke," while also acknowledging, "it was definitely a bit awkward."

But even though they weren't aware that the whole thing was supposed to come off as a joke (it wasn't exactly a humorous line in the first place), they didn't let the situation get to them. "Kim and Kendall were good sports about it,” a separate insider told Us Weekly. "The line was supposed to be funny. They weren’t bothered by people laughing.”

Seeing as though the famous siblings are part of one of the most iconic reality series, the two stars are the ones with the last laugh anyhow. As Kardashian recounted during her appearance on the Sept. 11 episode of The Tonight Show Starring Jimmy Fallon, KUWTK has had such a lasting impact on the reality TV genre, including culturally.

"People would come up to me and be like, 'OK, no sitcom writer can write what this reality of your family is. Like, no one would believe it,'" she said, citing Caitlyn Jenner coming out as trans back in 2015 as one of those game-changing TV moments. Kardashian also said, ‌"We love to share what we're really going through. And we've found that it's been really helpful for other people that are dealing with something similar, and we love being so open about it all."

That openness is exactly why fans come back to KUWTK season after season. And despite what any Emmy attendees think about that fact, there's no denying that the Kar-Jenner family has a knack for telling their stories and creating compelling television.