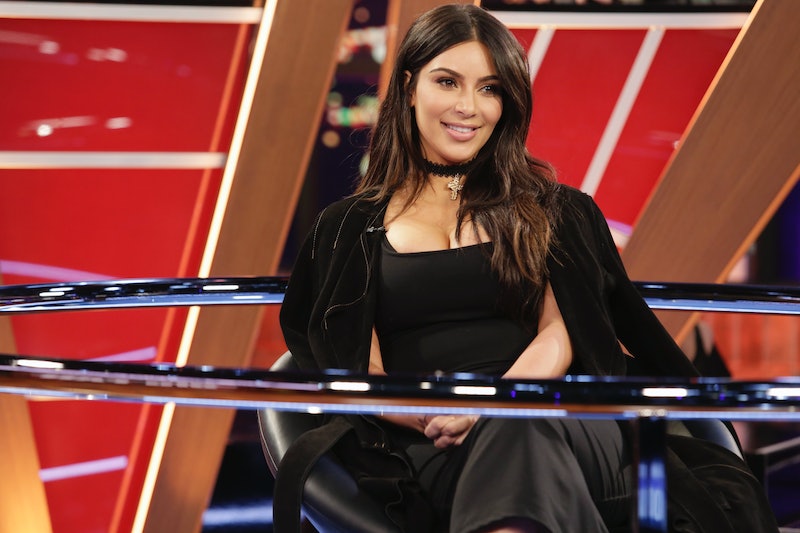 With celebrity fandom a bigger industry than ever, between celebrity's social media, products, charity efforts, and, of course, their talents, ABC's Big Fan is the perfect modern fame show — I mean, game show. Apologies for the terrible pun, but it just feels so right for a show where the prize is a literal fan. And there's no one better suited to a game show about fandom than Kim Kardashian — and when Kim K's engagement ring size was one of the quiz questions, the star actually got the answer wrong. Turns out, the ring has 15 carats, not 12, as Kim guessed. With the ring on her finger during the episode, Kim K didn't reveal too much info that hasn't been featured in an episode of Keeping Up with the Kardashians or in a confessional post on Instagram.

But unknowingly, the engagement ring moment turned out to be interesting for another reason — the episode was clearly shot before the Paris robbery where the ring was stolen from the Kardashian-Wests' hotel room, with Kim held at gunpoint by robbers pretending to be law enforcement. Now, with recent reports that seventeen people were arrested in connection with the scary event, it seems possible that Kim will get the ring back, but it's a surprising coincidence that it features in the star's Big Fan episode.

That was one of the few exciting moments in an otherwise normal episode of Big Fan, which was slightly disappointing for Kim, who often makes a big deal out of engaging with her fans, with even a retweet enough to send them into a fit of excitement. However, the star seemed a little subdued throughout her appearance, and perhaps that's because she's so used to bearing all and never keeping anything secret, while her fellow celebrities are more used to keeping their personal and professional lives separate. Whatever the reason, it's clear that fans of Kim Kardashian know just about everything about the prolific reality star.