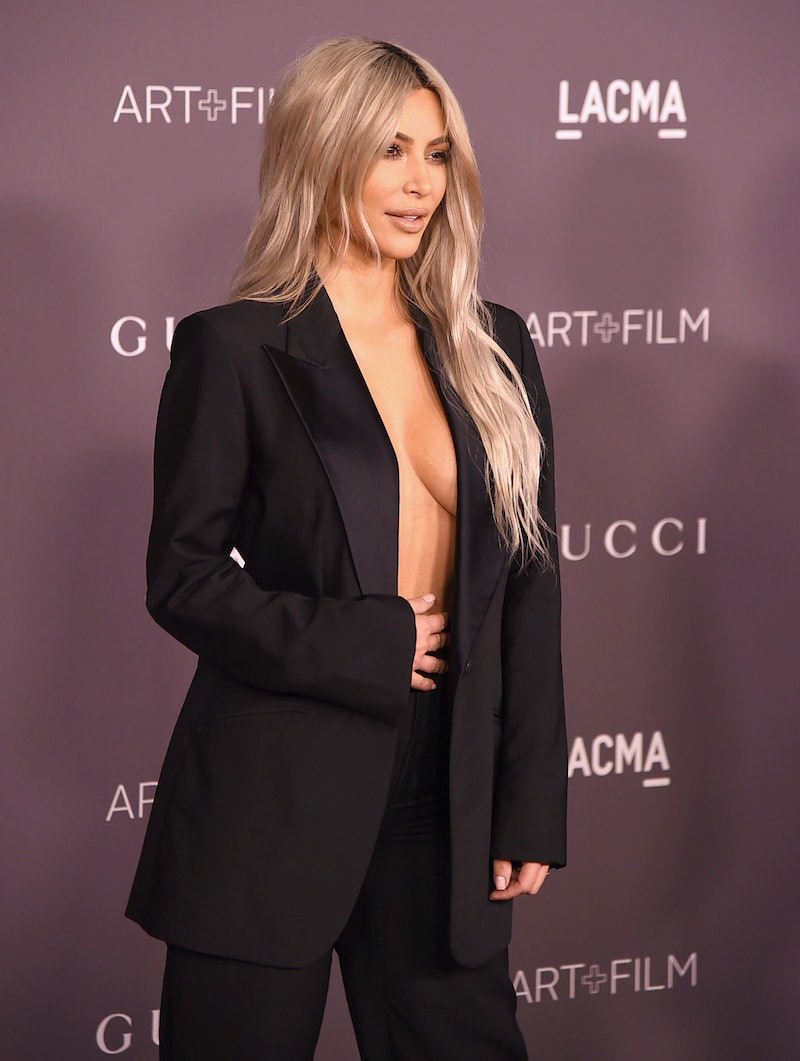 In a just released clip from the Monday, April 30 episode of The Ellen DeGeneres Show, Kim Kardashian commented on the Tristan Thompson cheating scandal for the first time, and she was surprisingly blunt. As noted by Elite Daily, after agreeing with host Ellen DeGeneres and saying, "Poor Khloé," Kim continued, "Like, I don't even know how to describe it besides it's just so f*cked up."

Kim didn't mince words when describing how the cheating rumors have affected her sister. Khloé Kardashian gave birth to her daughter, True Thompson, earlier this month. But rumors about her partner's alleged cheating scandal have overshadowed the birth announcement. Here's the statement Kim gave in the Ellen clip, which is streaming on EllenTube:

We really were rooting for Khloé — and we still are. She's so strong, and she's doing the best that she can. It's a really sad situation all over. I kind of made this rule with my brother, if there's a baby involved, I'm not going to talk — I'm going to keep it cute, keep it classy, and not talk too bad. I'm going to try not to say anything so negative, 'cause one day True is going to see this and, you know, it's so messed up.

It sounds like Kim has a lot more she wants to say about the incident, but that she's biting her tongue for her niece's sake. Based on the conversation she says she had in the past with her brother, Rob Kardashian, it sounds like Kim is putting True first. And that means she's not disparaging True's father too much — after all, he'll always be True's dad.

Kim's statement also seems to break from something she said about her family in an Elle video released in March. "I don't speak about other sisters and what they're doing," Kim said at the time. To be fair, though, that statement came in reference to rumors that Kourtney Kardashian had gone on a date with Justin Bieber. It's a lot different for Kim to address the aftermath of many reports about the father of her sister's child than it is for her to comment on speculative rumors about who her family members are seeing. And she's not talking about Khloé directly, per se, but sharing her opinion about the reported scandal.

Kim shared a similar sentiment in November, telling DeGeneres that the Kardashian-Jenners have group texts, where they "threaten each other's lives" if they speak for one another. But it doesn't sound like Kardashian's most recent statements to DeGeneres break that rule, since she's sharing her own perspective, rather than speaking for her sister.

Khloé, for her part, hasn't addressed the rumors about Thompson's reported cheating directly. But some fans believe that a recent post on her app may have included a veiled reference to the situation. In a post shared last Monday, Khloé wrote,

Life is short, and at times, we put so many others before us, but one of our priorities should be our own happiness. Once you have that, it trickles down to everyone around us.

The post was titled "My Wish For All Of My Siblings," so there's no clear evidence that Khloé was actually talking about her own situation. Still, it's a nice thing for anyone to remember — it's easy to focus on everyone around you, but it's OK to take care of yourself, too.

While plenty of unnamed sources have spoken out to various outlets about the cheating rumors, the Kardashian-Jenner family has, for the most part, stayed quiet. Based on this clip from The Ellen DeGeneres Show, though, it looks like the family may finally be ready to talk about the scandal. And it makes sense that Kim would choose to do so during a conversation with DeGeneres. She and the Kardashian-Jenner family appear to be close, and various members of the family are often guests on her show. The full episode will air on Monday, so fans may have to wait until then to see if Kardashian and DeGeneres will say any more about the situation.