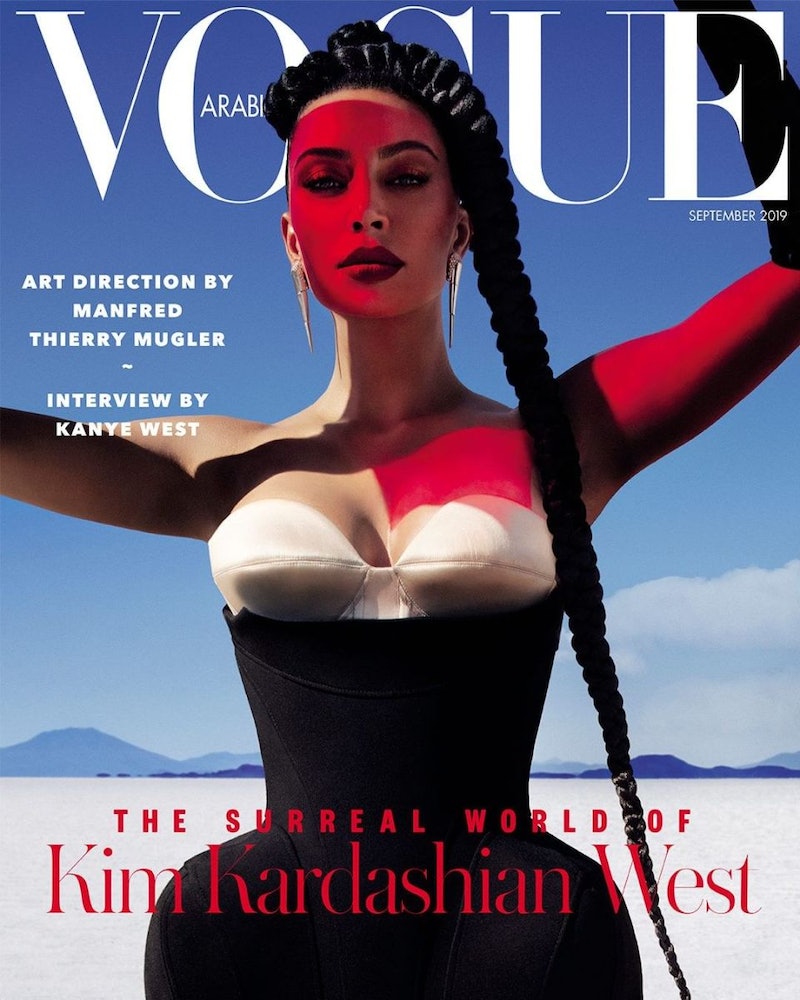 Kim Kardashian West is no stranger to Vogue covers, and now, the KKW Beauty owner has a new one. This time, the art director and interviewer will sound extra familiar to her fans. Kim Kardashian West's Vogue Arabia cover was directed by iconic designer Manfred Thierry Mugler, and Kardashian West's husband, Kanye West, and while that's a legendary moment for her fans, it's Kardashian West's ultra-long braid that could just grab the most attention.

According to Vogue Arabia, the issue marks the first time that Kardashian West has appeared on its cover, and she did so with major star power behind her. Most obvious is that her husband is behind the candid interview where she discusses everything from formerly being obsessed with fame to which sister is her favorite. As for the style, Kardashian West was dressed by legendary designer Manfred Thierry Mugler. In the cover and shoot, Kardashian dons looks from the designers archives as well as pieces from the current collections by Casey Cadwallader.

The result is a gorgeous shoot where architectural fashion rules. From exaggerated head pieces to surreal shapes, the looks are everything. However, there's a beauty element that's hard to ignore. Kim Kardashian West's braid on the Vogue Arabia cover is so long that it could give Ariana Grande's ponytail a run for its money.

According to the Vogue Arabia's Instagram, Kardashian West's hair look was created by hair stylist Joey George who also appears to work with publications such as Harper's Bazaar and other iterations of Vogue such as Vogue Greece and Vogue Mexico. Plus, if you're a fan of RuPaul's Drag Race winner Aquaria or watched the Met gala red carpet this year, George's name may also sound familiar. He created Aquaria's headpiece for the 2019 gala.

Now, George may just have the market cornered on braids.

Kardashian West's braided look isn't her only cover for Vogue Arabia, though. The reality television star had not one but three covers for the magazine each featuring a different look. In her second cover, Kardashian's braid is gone and replaced with a spectacular teardrop shaped head piece. As for her sartorial choice, she's wearing an archival Mugler fringed-bottom, high neck gown.

For her final cover, Kardashian transitions from the black looks she was previously wearing into an all-white Mugler archive piece that's all about the fringe. With a fringe cape, draped neckline, and fringe skirt, the gown is extra in the best way. Like her second look, the dress is paired with an architectural headpiece, this time in a more rounded oval shape.

While Kardashian West's Vogue Arabia braid may have stolen the beauty show, it's difficult to look away from the fashion. It's also not the first time that the KKW Beauty owner has worked with designer Manfred Thierry Mugler. In fact, one of her most well-known looks from 2019 was created by the designer. Kardashian West's 2019 Met Gala dress inspired by a wet look and featuring faux water droplets was a Mugler creation.

Now, the reality star is wearing Mugler again on the cover of Vogue Arabia and looking just as fab as she did at the Met.