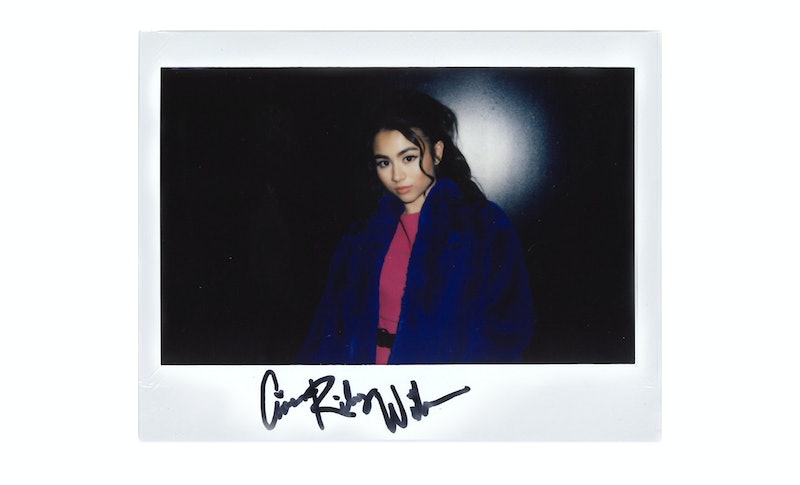 When celebrities hang out with Bustle editors, we want to give them the chance to leave their mark. Literally. So we hand them a pen, a piece of paper, a few questions, and ask them to get creative. The rest is up to them. This time, Kim Possible star Ciara Riley Wilson is leaving her mark in the Bustle Booth.

When Disney Channel announced that there would be a Kim Possible live-action movie, fans of the original complained about the non-cartoon aspect and even claimed the cast didn't look enough like their animated counterparts. But if you ask Ciara Riley Wilson, one of the new Kim Possible movie stars, the new adaptation does the original justice, while also carving out its own path. If anything, it's only expanding the beloved TV series' fanbase.

"If you loved the series growing up, I think you would love for a whole other generation to fall in love with these characters," she says to anyone who may still be skeptical of the movie, which premieres Friday, Feb. 15 on Disney Channel. "We're taking a cartoon that was so inspiring to so many people and showing it to another group of people and their cousins and their kids and their little sisters and brothers, so that's a really special thing."

That doesn't mean it won't keep early '00s fans entertained, though. Wilson teases there are plenty of throwbacks to the original show — whether the set-up of Kim's room being the same (including a sweater from the original and pictures of past missions on her wall), or the restaurant Bueno Nacho (which was filmed at "an abandoned Pizza Hut," says Wilson) being the characters' go-to food joint. And you can't forget everyone's favorite naked mole rat, Rufus, who was actually a lump of clay during filming, only later to be replaced with CGI. "That's one of the most impressive aspects of the special effects team," Wilson says of the final results. "It's so good ... It's like ugly-cute, which is exactly what Rufus is."

Plus, Rufus' character is voiced by the same actor as the cartoon from 2002-2007, Nancy Cartwright. And she's not the only one returning; the O.G. Kim Possible (a.k.a., Christy Carlson Romano) plays a pop star in the new movie. Back when the movie's cast was announced, Romano and Will Friedle (the original Ron Stoppable) made a fun video to share the news. "To have their support from the very beginning was a total confidence boost for us and very reassuring," Wilson says.

While the movie is paying tribute to the original series, Wilson says it is definitely "modernized," in addition to teasing some new things to look forward to, including her character. "It's really exciting to play Athena, because she is a new character and bringing in a whole new personality into the world of Kim Possible that people already know and love," the 17-year-old explains. "The new generation has a character they can hold onto as their own."

Wilson's Athena is the ultimate Kim Possible fangirl, who also happens to be the new girl at school. After noticing Athena is struggling at school, Kim and Ron Stoppable let her tag along on world-saving missions. When it came to portraying those missions on-screen, Wilson did most stunts herself, which she calls "rigorous" but "empowering."

"We did hand-to-hand combat, we learned stunt rolls, we had custom-made harnesses," she says about her month-long training session in Vancouver before filming. In addition to wire work and flips, she also learned how to use a bo staff. "We did have an incredible team of stunt doubles, and the stunt coordinator Melissa Stubbs was so amazing, but it was just really nice that they never underestimated us," she says, echoing the true mission and message of Kim Possible. "I did a lot of things I didn't think I was going to be able to do."

To get to know more about Wilson, check out her answers to the Bustle Booth questionnaire below.