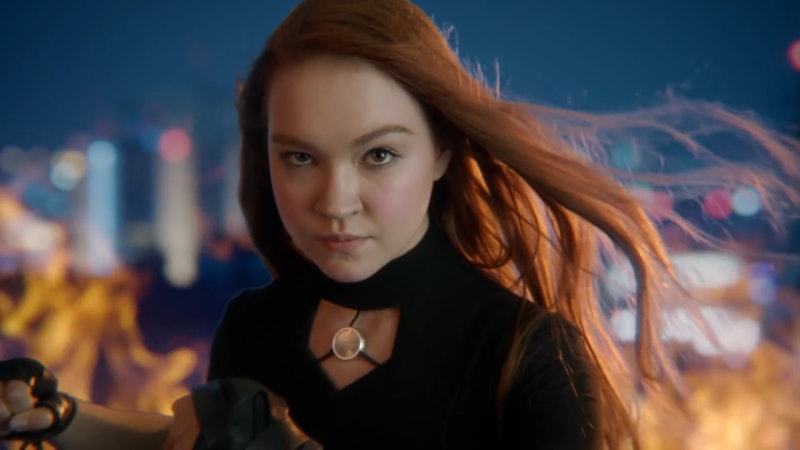 Here's the sitch, KP fans: Disney debuted the first full live-action Kim Possible movie trailer on Friday, Dec. 7, and you're going to want to grab your Kimmunicators and get the group chat started immediately. Right down to Kim's trademark ringtone, the Disney Channel original movie — which the network is scheduled to debut on Friday, Feb. 15 (at 8 p.m. ET/PT, if you're synchronizing watches) — will give you all the nostalgic feels from the original early '00s teen spy cartoon.

It remains unclear if you can still call or beep her (or if she now prefers text and e-mail), but from watching the new trailer, it's clear that 2019's Kim (played by Sadie Stanley) is still your basic average girl ... here to save the world. (And you can't stop her 'cause she's Kim Pos-si-ble, duh.) "So a few years ago, I accidentally received a distress call," she says in the preview. "I was done with my homework, so I answered it. Now, well, I save the world."

Kim's humanity-saving superspy missions are, of course, set against the backdrop of Middleton High School, where the drama is more teen-typical (like lunch room hierarchies) but omnipresent nonetheless. She even gets called out by a teacher in a scene previewed in the trailer for — what else? — being tardy to class. But that also means BFF/sidekick Ron Stoppable (Sean Giambrone) is back in the picture as well. Plus, there's a newcomer added to the mix — and plenty of high-tech gadgets and butt kicking, too.

According the Deadline, this is the Kim Possible movie plot:

"Kim’s day starts to turn around when she and Ron meet and befriend Athena, a new classmate and Kim Possible superfan who is having an even worse day than Kim. With Kim’s guidance and friendship, Athena transforms into the newest member of Team Possible. Soon, Athena starts to eclipse Kim just as the nefarious Drakken and Shego resurface in Middleton with a master plan to finally stop Kim. Now it’s up to Team Possible — Kim, Ron, tech-genius Wade, new friend Athena and Rufus, a Naked mole-rat that Ron meets along the way — to stop these super villains."

That's right, Drakken (Todd Stashwick) and Shego (Taylor Ortega) are back to, once again, wreak havoc and steal the "spark that makes Kim Possible." Only this time around, fans will notice in the clip that Drakken's skin isn't quite so blue. As co-director Zach Lipovsky recently explained to Entertainment Weekly: "It's like he's got a blue infection within. It’s like some experiment or some dastardly plan went wrong years ago and now he's got this side effect where he's got a bluish hue."

While fans didn't get a chance to see her in the trailer, the OG voice of Kim Possible, Christy Carlson Romano will also be appearing in the movie adaptation.

"I can't say too much about my involvement yet, but I'm very excited to help usher in the strong, empowered female character I helped bring to life, to a new generation," she told People in August. "And I'm equally thrilled to see what the original fans think!"

Another familiar voice from the original, Patton Oswalt (AKA villainous Professor Dementor) also signed on for the upcoming film. Rounding out the cast is How I Met Your Mother alum Alyson Hannigan (playing Kim’s mom), Issac Ryan Brown (as Wade), Connie Ray (as Nana Possible), Ciara Wilson (as Athena), and Erika Tham (as Kim's frenemy, Bonnie).

With the new trailer officially out, fans of the original Kim Possible will surely have their beepers turned to silent when the Disney movie premieres in February.