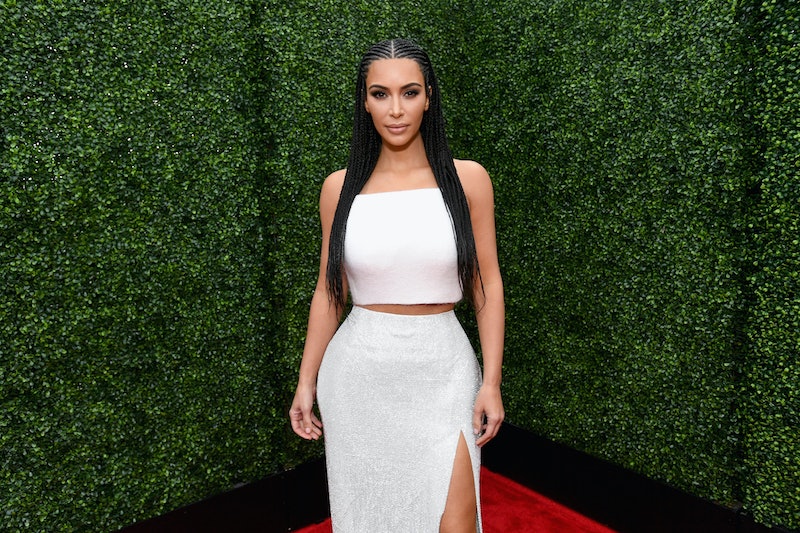 On Sunday night's episode of Keeping Up With The Kardashians, Kim takes major issue with her sisters' style, and as you might've guessed, it's decidedly unappreciated. Kim heads to Japan to promote Kanye's newest Yeezy line, and Khloé and Kourtney accompany her in the name of having a fun girls' trip. Instead of enjoying a carefree jaunt through Asia, they get a dose of unsolicited outfit advice, and it's not delivered too gently. Kim's comments about Khloé and Kourtney's style show how dedicated she is to Kanye's business, even when it might come at the expense of her sisters' feelings.

Apparently, Kanye's newest Yeezy collection can't just have a regular fashion show like other big designer names — instead, Kim is tasked with flaunting dozens of looks from the collection through Japan, and ensuring she's photographed by all the necessary paparazzi. "I only have a few days to get 20 looks shot," Kim says. "There's dozens of people working on this. It's my husband's collection, so I wanna do a good job, and make sure he likes the way everything turns out."

That's fine and dandy — it's actually a pretty cool way of generating buzz for a new collection — but when her sisters' outfits don't necessarily fit the Yeezy vibe, Kim seems to think it's a national emergency. "My sisters look so crazy. Like, it's actually embarrassing," she says as the three of them head out for dinner. "Kourtney with the Japanese inspired outfits, and Khloe's wearing ... huge chandelier earrings. They're really clashing, and just making my outfit look really bad, and ruining everything."

"I can't even eat dinner because I'm so disgusted with my sisters' outfits that completely don't go with my look," she continues, obviously agitated. How dare Kourtney wear color! The nerve of Khloé, donning sequins! Kim, in her monochromatic color palette, is not having it.

The next morning, Kim comes at them over it. "Um, so I gotta be real with you guys. You look like f*cking clowns," she says. "This is not like a tourist thing, where it's Halloween." Khloé and Kourtney are pretty unbothered, as they should be, since, you know, it's a ridiculous concern. From what was visible onscreen, it doesn't look like any cultural appropriation is happening, which definitely wouldn't be OK. They don't dress up in costume — they simply wear clothes that are a bit more festive.

"I thought my outfit was like, fun for Japan," Kourtney says, unphased. She seems to be bearing the brunt of the criticism, and did clap back at Yeezy's very sporty look when interviewed by the cameras. "You look like you just won the Tour de France and you're just cycling around town," she says of Kim's latest looks. Fans on social media were largely on Kourtney and Khloé's side, too:

Kim is hung up on her sisters' style for literally the entire episode, and if 45 minutes of the ordeal was exhausting, I can only imagine what actually being on the trip was like. "I'm not telling you guys who to be or what to wear, but I am telling you who to be and what to wear," Kim says. She later re-ups the criticism, telling Kourtney she looks like a "grandma," that she doesn't "look like anything special," and that she "better evolve before you fizzle out." Sheesh.

Kourtney lets it roll off her back for a while, but eventually is fed up. "Now I think Kim is just being rude, and rude to everyone [styling Kourtney]," she says. "We're just doing fun things together, and it's not that serious." Kim says she knows people are fed up with her attitude, but she doesn't really care. "If you can't take the criticism, you shouldn't have come on this trip," she says.

Toward the end of the outing, once she's through the majority of the stress associated with shooting an ungodly amount of Yeezy looks, Kim backs down and apologizes. "I just feel bad that I was like, so critical, so I'm working on it," she tells her sisters. That's probably a good idea.

It's understandable for Kim to be ultra-particular about the clothes she's putting on her own body — she's selling a product, and the whole Japan trip for her was essentially a glorified magazine shoot for Yeezy. But Kourtney and Khloé's style doesn't affect her, and telling them in the most inconsiderate of ways that she hates the way they dress doesn't exactly make for a feeling of sisterly love. Hopefully she realizes how tiresome she became, and cares just a little bit less about image moving forward.