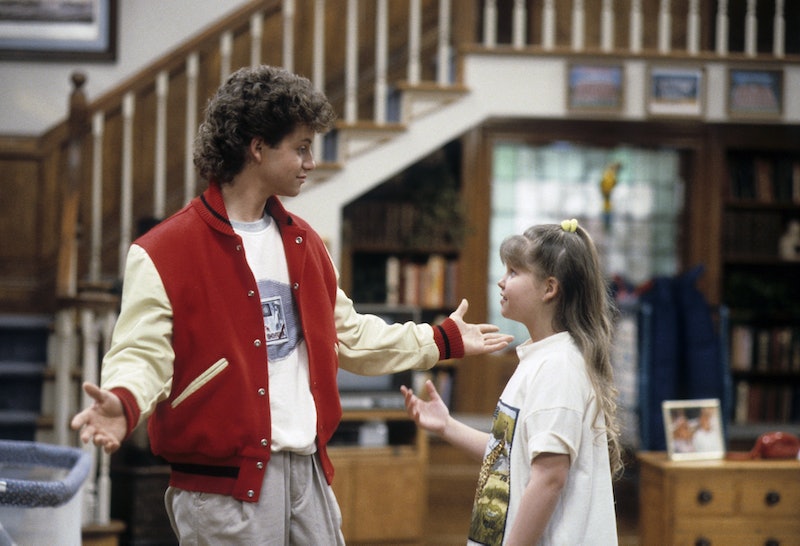 Spoilers ahead for Fuller House Season 5 Part A. Kimmy Gibbler has her teenage dreams come true when she gets to go on a date with Kirk Cameron in the final season of Fuller House. Candace Cameron Bure's brother had previously made an appearance on his younger sister's series when Kirk guest starred in Full House back in 1988 as Cousin Steve. But Kirk hasn't been in the mainstream entertainment industry for years since the Growing Pains star devoted his career to promoting Evangelical Christian beliefs. While Candace has similar religious views as her brother, her career hasn't been as focused on the church as Kirk's. Yet, with the inclusion of her brother in the final season of Fuller House, it's hard to disassociate this feel-good family comedy from Kirk's anti-LGBTQ religious beliefs.

From Kirk's one-liner about having a non-alcoholic drink to Kimmy on Fuller House, fans can infer that he is a bit more strict when it comes to his religion than Candace since D.J. Tanner is known to imbibe in some wine every now and then. In fact, Kirk will not kiss anyone but his wife onscreen — again, something that Candace does not follow, as can be evidenced by her multiple love interests in the reboot. These are personal choices that aren't problematic, but the lines between what these siblings believe gets blurry when it comes to Kirk's more controversial views. So while Candace may be open to something like featuring a gay character on Fuller House, also featuring Kirk and portraying him as simply the dreamy teen heartthrob that he was back in his Growing Pains days is in direct contrast to that due to his beliefs. In fact, it sort of undoes any good the show's other attempts at inclusivity and representation might have done.

Candace is a Christian conservative, as her stint on The View highlighted. She shared on The Wendy Williams Show in 2018 that, similarly to her brother, she ensures her acting career reflects her values by starring in "family entertainment," and she has brought that wholesomeness to Hallmark movies and as a producer, director, and actor in Fuller House. On the Netflix reboot, religion is not discussed; the focus is on the bonding between the family members. Still, as innocent as Fuller House already is, the Evangelical The Christian Post reported that Candace has received criticism from some fellow Christians for the way D.J., Kimmy, and Stephanie dress and how they drink alcohol on the series.

Even if Candace starred in a show that was strictly founded on conservative religious values, that would be fine. To each their own and Candace is free to use her platform as she wants. But instead, Fuller House appropriately follows in the footsteps of Full House when it comes to the good-natured humor and tone of the show. But no amount of nostalgia, precocious kids, or dance numbers can distract from the fact that Kirk's brand of Christianity in particular is harmful, specifically to the LGBTQ community and to women.

When appearing on Piers Morgan Live in 2012, Kirk said that he thinks homosexuality is "unnatural." "I think that it's detrimental and ultimately, destructive to so many of the foundations of civilization," he said. After receiving criticism for his statement, the actor attempted to clarify on The TODAY Show and on his Facebook page by claiming he loves all people, but stood by his anti-gay stance since he's a "Bible-believing Christian."

Kirk has only taken work that highlights his extreme Evangelical beliefs and has established a talk show and ministry called The Way of the Master. Besides his anti-LGBTQ rights and anti-choice views, he also is anti-evolution telling People that he believes Charles Darwin's The Origin of Species influenced Adolf Hitler. He primarily stars in projects that overtly espouse his religious beliefs, like the movie series Left Behind about the rapture, the "documentary" Monumental about America's Christian roots, and the holiday film Saving Christmas where he shifts the focus of the holiday's pagan roots to focus on Christianity.

Candace has never directly expressed the same extreme views as Kirk in public and she absolutely shouldn't be help responsible for her brother's bigoted views. However, her stance on LGBTQ rights did come into question when Candace defended the Oregon bakery that had refused to bake a cake for the wedding of a lesbian couple in 2013 on The View, saying it was about "freedom of association" and "constitutional rights." Those comments came back up ahead of the initial premiere of Fuller House. At a Television Critics Association panel in 2016, Deadline reported that Candace was asked if she'd be willing to participate in a storyline that featured a same-gender couple. She said she had been "defending religious freedom" on The View and was not describing her personal feelings about the LGBTQ community. "I'm an actress on a television show and I support all things that we go through as human beings and would love all our characters to explore whatever issues that are current in our culture and our society today and I'm 100 percent on board with that," she said.

For her part at least, Candace should not be held accountable for her brother's past views. Her career, while not necessarily the most inclusive, has been far more mainstream and open to people of different beliefs than her brother's.

There hasn't been a same-gender couple on Fuller House, but the show did feature a couple of LGBTQ storylines in Season 4. Stephanie revealed she had dated women in the past and new character Casey, who is openly gay, was introduced. Fuller House writer Nicholas Fascitelli, one of two writers on the staff who are gay, spoke to The Advocate about the importance of having a gay character on the series. "To me, Casey is mostly significant because he is on a show with Candace. Hopefully people who look to her as a leader — and there are many — will think a little differently about this type of gay person now that he's been in D.J.'s home," Fascitelli said. "I think it's critically important to have a gay writer on these shows, as people realize that homosexuality and family are not mutually exclusive." As for LGBTQ moments in Season 5, in the very same episode that Kirk is featured in (which Candace directed), Lisa Loeb appears and performs her Pride anthem "Sing Out" that she released on National Coming Out Day.

It's quite a paradox and perhaps an effort by Candace or the Cameron siblings to show support for the LGBTQ community. For her part at least, Candace should not be held accountable for her brother's past views. Her career, while not necessarily the most inclusive, has been far more mainstream and open to people of different beliefs than her brother's. Yet, she's also shown continued support for her brother, like in an interview with Closer Weekly where she shared that directing him in Fuller House was "a dream come true."

While Kirk's appearance does not necessarily have to take away from the warm, fuzzy feelings that Fuller House might give off, it's unsettling that the series chose to feature him in such a positive light after his hurtful comments toward the LGBTQ community.

More like this
This 'Gossip Girl' Wardrobe Error Has Gone Viral On TikTok
By Alyssa Lapid
Rupert Grint Just Shared A *Major* Update About Ron Weasley’s Future
By El Hunt
Netflix Shut Down 'Bridgerton' S3 Rumours About A “Very Dark” Storyline
By Bustle
'The Last Of Us' Has Officially Been Renewed For Season 2
By Darshita Goyal
Get Even More From Bustle — Sign Up For The Newsletter
From hair trends to relationship advice, our daily newsletter has everything you need to sound like a person who’s on TikTok, even if you aren’t.