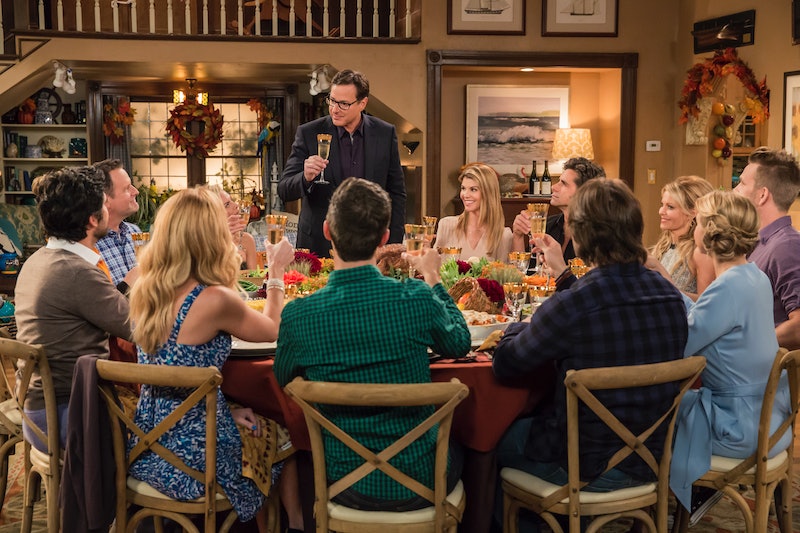 Fuller House is pretty much one big homage to Full House, and the Netflix revival definitely embraces its original show. The new episodes were no exception with Fuller House Season 2 easter eggs and references to Full House littered throughout the series. I'm sure one of the main reasons so many people watch Fuller House is for the '80s and '90s nostalgia factor, so why shouldn't the writers reference the beloved original show every chance they get?

With everyone returning again for Thanksgiving (the notable exception still being the Olsen twins) and a high school reunion for D.J. and Kimmy (who cares that it was their 21-year high school reunion?), Fuller House Season 2 set itself up perfectly for references to the original series. Of course, the whole premise of Fuller House set itself up for this with D.J., Stephanie, and Kimmy's lives mirroring Danny, Jesse, and Joey's lives. While the kids they are raising learn new lessons though, the women that Full House fans watched grow up on television get to relive their childhoods — and delight fans in the process.

So here are all the times Fuller House Season 2 referenced Full House . While the Netflix series is certainly not subtle, it sure is fun for fans of the original Tanner crew.

D.J. gave her son Jackson advice about how to impress his crush Lola by being confident. She reminisced about how Steve would enter her house confidently when they were teenagers and take whatever he wanted... out of the refrigerator.

And don't worry, that wasn't the last of the Steve food jokes since he made a ton of jokes about the ton of food he eats throughout Season 2 from the first episode on.

After Ramona's first kiss turned sour, D.J., Stephanie, and Kimmy all recalled their first kisses to make her feel better in "Ramona's Not-So-Epic First Kiss." None of theirs were particularly great, either.

Although not a direct reference, Growing Pains' Alan Thicke portraying D.J.'s game night date Mike was like when the other star of Growing Pains — and Candace Cameron Bure's brother — Kirk Cameron was on Season 1 of Full House as Cousin Steve.

Do you really think you could go through a season of Fuller House without multiple references to Uncle Jesse's hair? Even Max's chicken that was named after Jesse had Elvis hair!

6. The Return of Nicky and Alex

While having Danny, Jesse, Joey, and Becky returning is always exciting, seeing Nicky and Alex all grown-up makes us a little misty-eyed. We were there when they were born! (Well, not really — but you get the point.)

It was truly frightening to not watch one Gladstone — but six Gladstones — do Joey's catchphrase.

Danny's two-thirds life crisis was a bizarre plot point, but it did let Danny discuss his neat freak tendencies since the bookshelf that almost fell on him (that caused this crisis) hadn't been dusted in three whole days.

Steph told Uncle Jesse to read a book to Tommy in his Elvis voice because "Kids love that — I know I did." Cue the audience, "Awww." Even Aunt Becky got in on channeling Elvis when she said Jesse's catchphase, "Have Mercy" later in the "Fuller Thanksgiving" episode.

There's no rest for Mary-Kate and Ashley Olsen when Fuller House comes to town. As D.J. was doing her Thanksgiving prayer, her line about hoping Michelle would be there next year was super loaded — and John Stamos threw ambiguity to the wind when he broke character and addressed the Olsen twins by saying, "Come, it'll be fun."

And with Girl Talk came Stephanie's bad influence friend Gia, who really hadn't changed much from junior high. Anyone else notice Gia and Steph doing the exact same moves to Ace of Base's "The Sign" as they did all those years ago? They also moved to headset mics after Steph knocked over the mic stand in rehearsal just like she had done during the talent search in Full House.

Steve's birthday gift to D.J. was a familiar sight from her childhood bedroom.

Kimmy and D.J.'s high school reunion was jam-packed with references — from Kimmy's light-up prom dress to a slew of old characters returning. Kathy Santoni, Nelson, Viper, and Duane all came back to Bayview High School. Also, don't think I didn't catch that NSYNC anachronism that was only used for a lame joke about Lance Bass being gay. Yes, they were a band in 1995, but not well-known enough for D.J. to have been voted most likely to date Lance in her yearbook.

Fuller House also gave us a flashback to Steve's old high school days when D.J. found the photo from his prom, where he kissed his old girlfriend Rachel. They danced to "I Will Always Love You" back then though, not "(Everything I Do) I Do It for You" like they did at the reunion.

Steve had his Steve Urkel doll filling in for the baby Jesus in C.J.'s nativity scene. The Family Matters character had actually appeared on Full House back in the day.

Rusty got two shoutouts in Fuller House! He was the son of Danny's girlfriend and he not only was Stephanie's first kiss, but Max and Rose recreated one of his pranks.

Danny gave it to Jesse straight by telling him how he really felt about Jesse's song "Forever." Joey even called it a snoozer!

And with that, another season of Fuller House ended, but good thing through this show, Full House will never ever be gone.