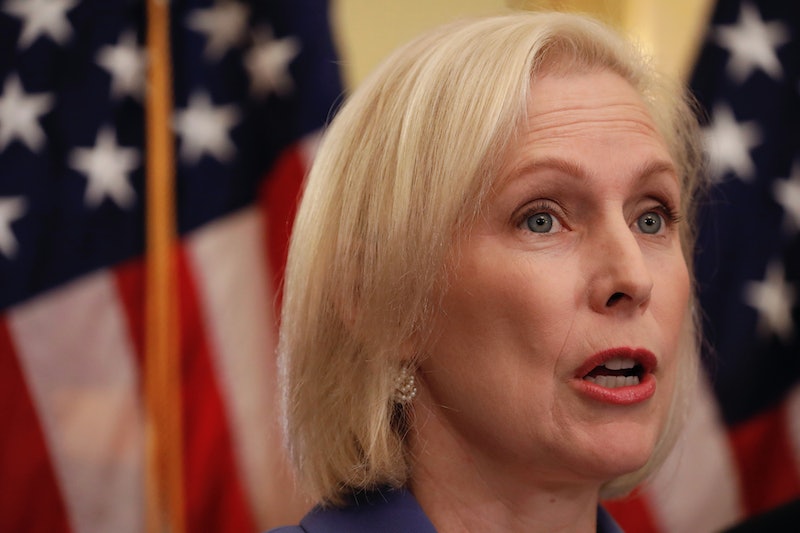 In an emotional speech on the Senate floor on Wednesday, Sen. Kirsten Gillibrand addressed the Brett Kavanaugh sexual assault allegations, all three of which he has denied. She said the public response to these allegations is exactly why many survivors of sexual violence do not come forward, and told her colleagues that this was setting a terrible example for young boys and girls.

"For anyone who has ever wondered why so many survivors of sexual assault don’t come forward, obviously there’s trauma, but there’s also the fear of this very kind of retaliation and scorn," she said.

Addressing President Donald Trump, who has largely characterized the accusations against Kavanaugh as part of an elaborate smear campaign, Gillibrand asked if doubt and disbelief were the appropriate way to respond to survivors of sexual assault. She dug deeply into the question:

Gillibrand detailed every reason she believed that her Republican colleagues were failing the women who had come forward to accuse Kavanaugh, and harkened back to the now-infamous Anita Hill hearings from October of 1991. She also warned that moving to expedite Kavanaugh's confirmation hearings was sending a harmful message:

This process is sending the worst possible message to girls and boys everywhere. It’s telling American women that your voice doesn’t matter. It’s telling survivors everywhere that your experiences don’t count, they’re not important, and they’re not to be believed. We are saying that women are worth less than a man’s promotion. That’s not how the world is in 2018, and we cannot allow this Senate, this body, to bring us back to before 1991.

Another point Gillibrand made concerned how much "proof" could reasonably expected from women who tell Senators that they are victims of sexual assault. Per Gillibrand, the Senate was and is not in any position to put Kavanaugh on trial. With that in mind, she argued that some of the evidentiary requirements needed in court rooms were not necessarily in play, such as the idea that someone is innocent until proven guilty.

But above all else, Gillibrand indicated that, in such emotionally wrought situations, empathy is paramount. She explained:

The last two weeks have been so painful for women who have experienced sexual trauma. Women have lived through this and when they are watching some of the most powerful people in this country disregard, distrust, disbelieve, minimize, devalue, unfortunately, it’s painful, for all of them. It’s painful because you’re tired of seeing the same old outcome every single time. You’re tired of the scenario where the men are believed and the women are not.

It's impossible to know whether senatorial Republicans will take Gillibrand's message to heart, at least in the short-term. As of Wednesday afternoon, a confirmation vote remains scheduled for Friday morning, and no publicly-acknowledged FBI investigation has been initiated.