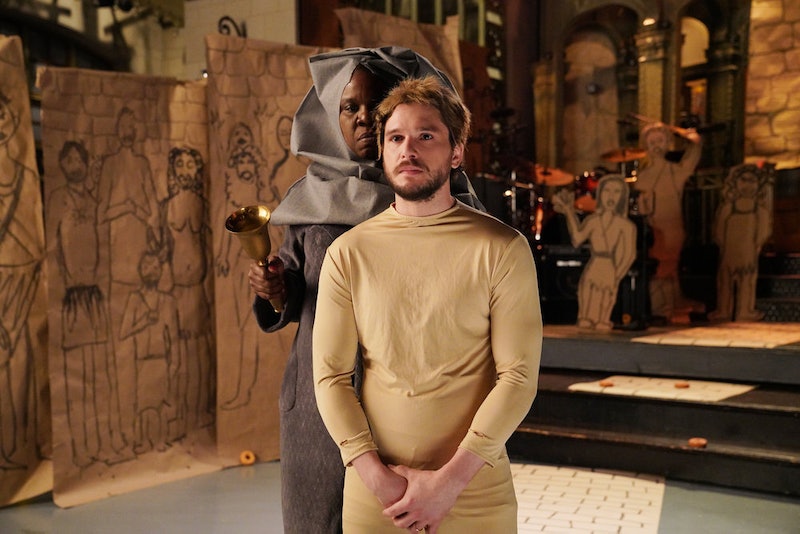 Kit Harington might be a huge star right now, but in a couple of months, he’s going to be officially unemployed. Which is why it’s good that the Game of Thrones star is brushing up on some new resume skills this weekend and trying his hand at hosting Saturday Night Live on April 6. In a new SNL promo, Kit Harington played out Game of Thrones' superfan Leslie Jones' fantasies and proved just how versatile an actor he is, while giving Jones the time of her life.

In the promo for the April 6 episode of SNL — hosted by Harington with musical guest Sara Bareilles — GoT super fan Jones decided to put on a very low-budget reenactment of some iconic Thrones scenes. From the White Walker battle, the three-eyed Raven, and the scene from Season 7 where Jon Snow finally arrives in Dragonstone to meet Daenerys, Jones has got it all. Khaleesi is played perfectly here by the comedian who asks, “I assume, my lord, you are here to bend the knee?” But unlike Jon Snow, Kit is not here to do any bending. “Leslie, what are we actually doing here? I’ve been here for four hours,” Harington says in the clip. Leave it to Leslie Jones to lowkey kidnap Harington, dress him up as Jon Snow, and have him cosplay with her.

The best part of the promo is the end, when Jones forced Harington to do a Cersei walk of shame through Studio 8H while being pelted with donuts. Hey, this Kit Harington dude is pretty funny! Of course, this isn't his first time doing comedy. The actor proved that he can do more than mope in the snow when he starred in the 2015 HBO comedy 7 Days In Hell.

Having Harington on SNL seems like a special gift for Jones herself, who is straight-up obsessed with the show. She became notorious for her incredible Game Of Thrones live tweets all the way back in 2017, when she started watching the show and adding in her own commentary, recording her reactions and sharing them with the world. And she will be for sure be back at it with double the force for the eighth and final season of Game Of Thrones this year. She even has a recurring segment on Late Night With Seth Meyers where she and her friend Seth Meyers watch the show, which will hopefully come back for Season 8 as well. (Hot tip: if you are rewatching Season 7 to prepare, do yourself a favor and watch the finale with her Twitter thread on hand.)

No doubt that Jones probably pushed Harington the limit when it comes to asking for spoilers behind the scenes, and she's so cool, it wouldn't be surprising if he let something slip. He already openly admitted that he told the ending of the show wife Rose Leslie, who played Jon Snow's wildling lover Ygritte many seasons ago. "I told my wife last year how it ended, and she wouldn't talk to me for about three days. And she'd asked!" he said. Though he should clearly be careful with his words around Jones, unless he wants to do another walk of shame live on Saturday night.

More like this
Alicent's Green Dress In 'House Of The Dragon' May Be An Act Of War
By Kadin Burnett
Nicola Coughlan Shared A Lady Whistledown Excerpt From ‘Bridgerton’ Season 3
By Grace Wehniainen, Alyssa Lapid and Sam Ramsden
This Episode 6 Moment Foreshadows Viserys' Fate On 'House Of The Dragon'
By Grace Wehniainen
The 'Andor' Timeline, Explained
By Gretchen Smail
Get Even More From Bustle — Sign Up For The Newsletter