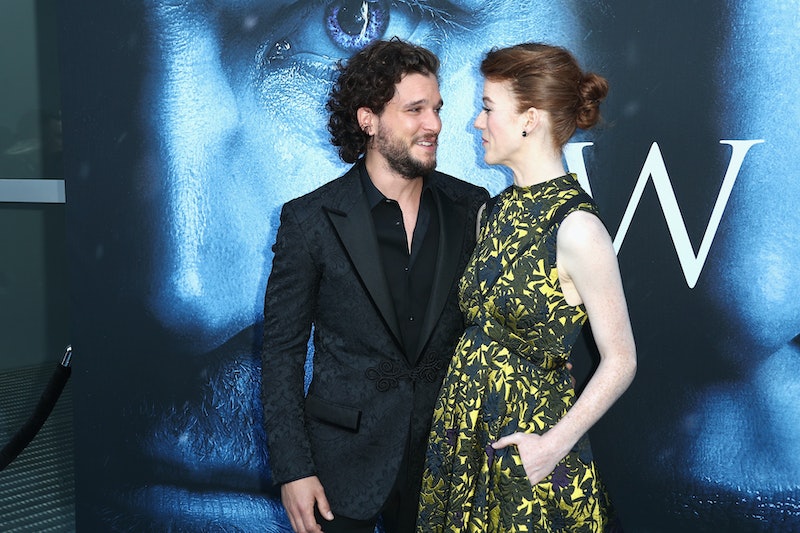 As far as Game of Thrones spoilers go, it sounds like Ygritte may prefer to know nothing. Kit Harington revealed the Game of Thrones ending to Rose Leslie, and apparently, it did not go over well. When The How to Train Your Dragon: The Hidden World actor appeared on UK radio program Kiss Breakfast Show on Friday, he said that when his wife and former GoT co-star found out how the final season concludes, she gave him the silent treatment. And the silent treatment lasted for multiple days.

According to outlets like Digital Spy and The Daily Mail, Harington said,

“I told my wife last year how it ended, and she wouldn't talk to me for about three days. And she'd asked!”

I gotta say, I did not see "Rose Leslie gets a spoiler from Kit Harington" coming, if only because Rose Leslie has said time and time again that she doesn't want spoilers. The very same person who flat-out asked her husband to give her a spoiler used to make her husband leave their home whenever he had a new script to read because she feared his eyeballs might be full of spoilers. As the GoT alum told Entertainment Weekly in March 2018,

“I for sure ask Kit not to show me his excitement after he has read an episode, simply because I don’t want to read anything in his eyes. I know the anticipation is killing a lot of people, and my God the build-up is fantastic. I can’t wait until next year. So when he’s at the other end of the room and reading the episode, it’s like, no… we are not going to have eye contact for a long time. Go make a cup of tea. Calm down.”

That same month, Leslie told E! News that she is not interested in hearing any Thrones spoilers. She explained,

"I've hands down said from the beginning, sadly as season eight is now being shot I don't want to know anything about Game of Thrones in terms of any spoilers and what the storyline is going to be. I want to be sitting down on my sofa along with the rest of world, as excited and as pumped. Genuinely, I don't have a clue! I don't have a clue and I'm very happy about that because all of this anticipation, all of this building up is just going to be so satisfying when we finally get to watch the first episode."

Hey, you've got to hand it to Leslie for making it this long without grilling Harington for GoT Season 8 details.