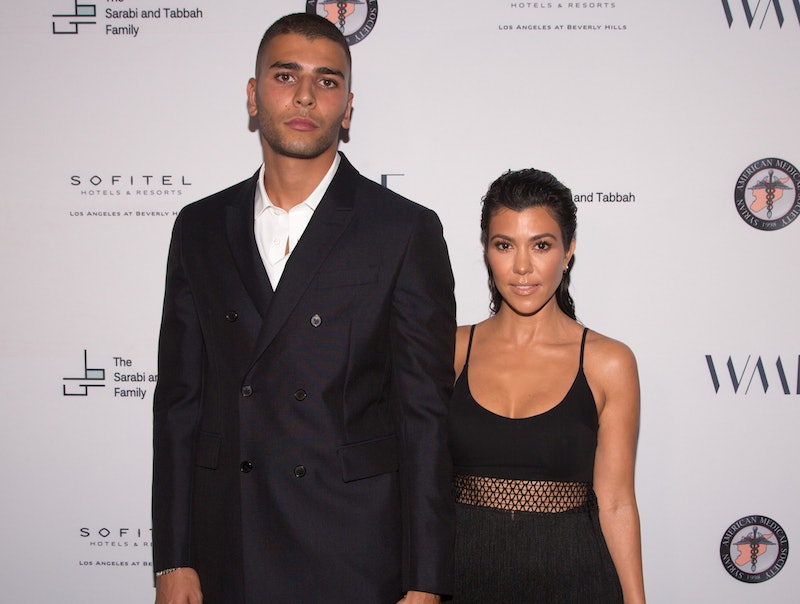 Though the couple's recent outing together isn't what it seems, Kourtney Kardashian and Younes Bendjima are sparking dating rumors again. On Friday, Sept. 21, The Daily Mail published pictures of the Keeping Up With the Kardashians star holding hands with her model ex-boyfriend in Los Angeles. As per the report, Bendjima had picked up Kardashian from her Calabasas home, drove them to downtown LA for an Italian lunch, and spent some time at an exhibit at the Blum & Poe Art Gallery in Culver City. Kardashian, donned in an olive bodycon dress and white sneakers, and Bendjima, wore a bucket hat, tee, and sweatpants, were all smiles for their eventful outing.

But these two aren't reuniting as a couple. On the heels of Daily Mail’s report, a source told E! that while the two still have a “romantic connection,” Kardashian and Bendjima are just friends. “Kourtney and Younes have always been in touch and friendly with each other," the source said. "They reconnected after their split last year and remained friendly. He's been to several of the family events, including Kourtney's birthday and he's hung out with Kourtney a few times recently in social settings. Younes asked Kourtney to get lunch or dinner with him this week, and she accepted."

The source continued, "They had a really fun day together and they still have a romantic connection... Kourtney really wants to be in a relationship but it's very unlikely that she will give it another try with Younes."

The outing comes a year after the two called it quits in August 2018 after nearly two years of dating. Their relationship had reportedly been fraught since they returned from their trip to Italy that June, according to E! News. Plus, there had been incidents of Bendjima being photographed with another woman in Mexico and him shaming Kardashian on Instagram for her pictures. A source told E! in August 2018, "Kourtney is upset but she is trying to focus her energy on other things and stay busy."

The source continued, "Kourtney doesn't plan on calling attention to it publicly and wants everything to blow over. It's upsetting to her. They have been having ups and downs for the past month. There was a huge chance they were going to get back together and they were working on things. But now that these photos surfaced, things are definitely over."

The pair have been linked since 2016. During an episode of Keeping Up With the Kardashians that aired in November 2017, Kardashian revealed that she actually met Bendjima during a tumultuous time for the Kardashian clan: in Paris bar in October 2016 — just one night before Kim’s hotel robbery.

More so, Bendjima proved to be helpful that fateful night. Explaining how she met up with the model on the night of the incident, she told sister Khloé in the episode, “[W]hen we walked into that club was when we went to the bathroom and got the phone call about Kim. So then the party was over,” she said. “And then he was like, ‘I'm not leaving you guys,' and he like had to translate everything." Khloe added, “I heard Kim say he was the translator. Who knew!”

So, Kardashian and Bendjima aren't likely back together, but their friendship seems to continue.