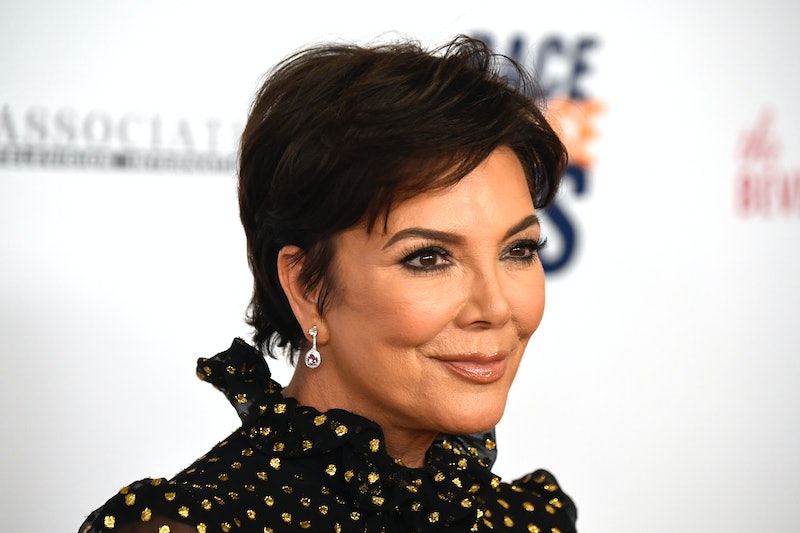 File this one under Peak Kardashian moments. Whenever a member of the Kar-Jenner fam has a birthday, which as it expands seems like a daily occurrence, a golden Instagram moment is born. So naturally, Kris Jenner's birthday post for MJ made a statement. Although, fans aren't totally sure it was the one she intended.

In honor of Kris' mother's 85th birthday, the doting daughter wrote, "My squad celebrating MJ’s birthday! #love#family#rideordie," alongside a heart emoji. But it's the series of photos Kris selected that has people talking. She posted seven black-and-white photos with a "Happy 85th MJ 2019" border on the top right corner of each. Various friends and family members were included, from daughters Kendall and Kylie to cousin Cici Bussey and friend Faye Resnick. One person not pictured in the collection: MJ.

It became abundantly clear from the comments section that people were wondering where the birthday girl was. I mean, it was pretty hilarious that for a post devoted to MJ, she was nowhere to be found in the seven (!!) different photo booth shots chosen. But lest you worry about Mary Jo Campbell, she rang in her birthday early on Saturday, July 20, with all of her close family and friends. In fact, she was probably too busy chatting up guests to pause for a photo op.

While MJ's official birthday isn't until July 26, the clan got together to raise a glass to their iconic matriarch. Khloé Kardashian posted photos and videos from the party over the weekend on her Instagram Story, which included some incredible content featuring the youngest Kar-Jenners. Khloé's 1-year-old daughter, True Thompson, was on hand, and she could be seen playing with her cousins. Kim brought along her three eldest children, North West, 6; Saint West, 3; and Chicago West, 1. Kylie brought her 1-year-old, Stormi, and Kourtney brought along Penelope, 7, and Reign, 4. Plus, Kendall made an appearance at her grandmother's birthday, too. Per E! News, Khloé captioned the day, "Celebrating MJ!! 85 years of perfection."

Based on the family's social media coverage of the event, guests dived into a meal served on a a table decorated with pastel flowers and blue decor. As for MJ's birthday cake, a white frosted berry cake was served. By all accounts, it was a celebratory day for a woman who has made every minute of airtime on Keeping Up With the Kardashians count.

One of her most legendary one-liners expressed solidarity with granddaughter Kim after her short-lived marriage to NBA player Kris Humphries. MJ herself declared that she had married her high school sweetheart before Kris' father and that it had lasted for a shorter time than Kim's 72-day union with her second husband. In December, Kim posted a photo of her grandmother in her wedding gown to the 'gram. She captioned the photo, "I just found this pic of my beautiful grandma MJ at her 1st wedding. It lasted just 2.5 months and her family spent all they had on this wedding. She felt so bad but followed her heart. Kinda sounds familiar lol She's always taught me to follow my heart and do what I want to do no matter what! I love you MJ (and how much does Kendall look like MJ!!!)"

So, even if absent from her daughter's birthday post, MJ's presence will always be felt in the Kardashian sphere.