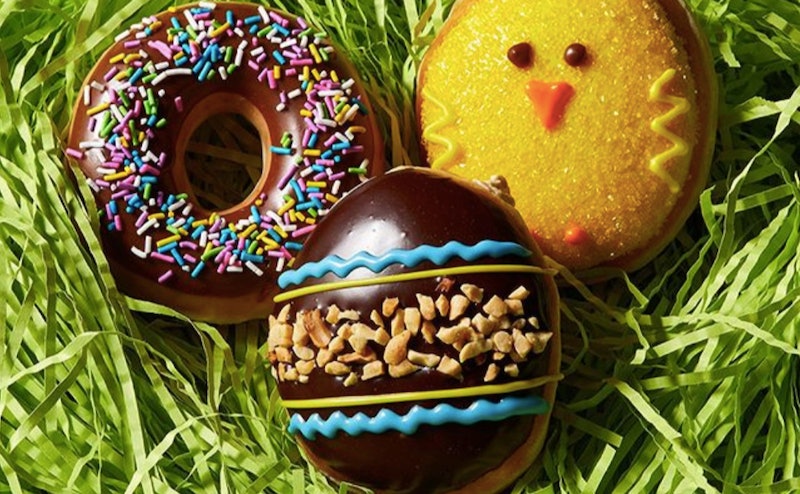 If you've never gone into a Krispy Kreme when the red light is on outside, you're missing out. I didn't eat my first Krispy Kreme doughnut until college, and after a lifetime of thinking doughnuts were a subpar treat I saw the (red) light. Truly, there in no dessert experience that can quite match it — and now they are continuing to change the game by cooking up something really special for the Easter season. Krispy Kreme's Reese's Peanut Butter Egg doughnut is officially back in action, according to their most recent Instagram post and a press release on their website. Spring may start with the Spring Equinox, but I think we can all agree that it started the moment Krispy Kreme brought these PB-filled bad boys back into our lives.

If you didn't have a chance to try them last year, the confection is made up of an unglazed classic doughnut, stuffed with peanut butter "kreme," dipped in chocolate icing, topped with chopped nuts, and decorated like an Easter egg with blue and yellow icing, according to a press release from Krispy Kreme. It's like an amped up version of the classic Easter candy, but larger and doughier and probably with a much bigger sugar kick.

Plus, the Reese's Peanut Butter Egg Doughnut isn't the only springtime special the chain is offering; you'll also find a kreme-filled doughnut decorated like a chick on shelves, as well as a chocolate frosted number with sprinkles reminiscent of a spring color palette. A lemon glazed pastry will also be added to the menu for one week in late April after reigning supreme over caramel, maple, and blueberry flavors in an online #VoteforGlaze contest.

The bakery chain has never been one to shy away from inventive renditions of their specialty, and if history serves as any indication, festive holiday-themed treats are an area in which they excel. In the past six months alone they have sold green doughnuts for St. Patrick’s Day (stylizing the name as O'riginal), gingerbread doughnuts for Christmas, and Oreo doughnuts for Valentine’s Day.

Plus if all of that wasn't enough, the chain introduced the Hershey's Gold doughnut — a glazed doughnut topped with pieces of Hershey's new Gold bar and a drizzle of caramel icing— in mid-February.

The good news is Krispy Kreme is hardly the only culinary chain using the season transition as a reason to debut new spring-related treats; it may still be freezing outside, but there are a whole slew of seasonal items being released that will hopefully see us all through them.

Instagram devotees will recall Starbucks' Unicorn Frappuccino — a turquoise and magenta iced blended beverage that tasted of mango and sour blue (yes, blue is a flavor) and graced everyone's social media feeds for one week last March. Well, clearly social media influencers weren't the only ones pleased with the promotion, as later this week the coffee chain is supposedly debuting a new outrageous concoction just in time for spring. Baristas across the country have begun to post hints about Starbucks' next big beverage: the Crystal Ball Frappuccino. Starbucks hasn't confirmed its existence, but according to rumors circulating online, the offering will once again be turquoise, have a base of peach-flavored cream, topped with whipped cream (naturally) and be finished with crumbled rock candy. Fingers crossed until we get word from the mermaid herself.

But if sweets aren't your thing, donut despair. Everyone's favorite faithful old convenience store 7-11 is also getting in on the excitement with the debut of its new TATER TOT BAR. Who knew you could improve on the delightful crispy potato puffs? 7-11 did. According to a press release from the company's corporate office, the bars will give customers an option to add between six and ten additions to their order of tots, with options like chili and nacho cheese. Think of the new offering as tater tot nachos. totchos, if you will. Plus, college students can rejoice, as the snack is super budget-friendly with a set of 10 for a buck or 25 for two dollars. My mouth is watering already.

The vernal equinox is this afternoon. Use it as an excuse to treat yourself to any number of tasty treats from your favorite chains — with all these nor'easters pummeling half the U.S., you're gonna need them.