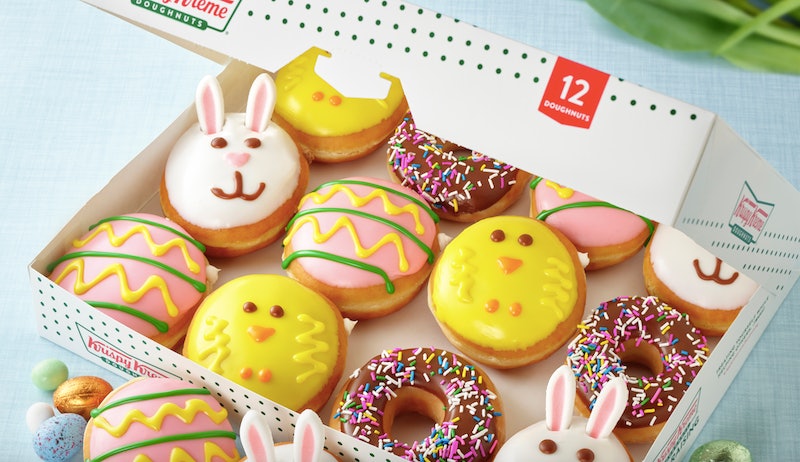 The inspiration for springtime desserts is everywhere. Just look outside; the sun is shining, the grass is green, the flowers are blooming. Even the Earth seems more joyous. Not to mention, a few pretty big holidays are coming up. Leave it to Krispy Kreme, home to the world's preeminent doughnut masterminds, to use the season as an inspiration for its circular edible canvases. Beginning Monday, April 8, you can snag a box of Krispy Kreme's signature spring doughnuts to celebrate the long-awaited beginning of the *best* season.

According to a press release, this year's dazzling dozen of springtime sweets includes three homages to the forthcoming Easter holiday. The Bunny Doughnut is described as a "Chocolate Kreme filled doughnut is dipped in icing and decorated like a bunny with chocolate and pink icing, and sugar ears." It's perfect for those who believe everything that is yummy is even yummier when it is cute (duh). In the same vein is the Chick Doughnut, which is described in the press release as "Filled with Krispy Kreme's tasty cake batter." The doughnut is coated in a hard shell of bright yellow icing and decorated to look like a chick. Rounding out the springtime dozen flavors is the Decorated Egg Doughnut. Similar to the classic Cadbury Creme Egg, this doughnut is "...filled with Krispy Kreme's classic White Kreme, dipped in a fruity flavored strawberry icing and finished with a hand-decorated egg design."

In aforementioned press release, Dave Skena the Chief Marketing Officer for Krispy Kreme Doughnuts said in statement, "Spring is a time of renewal and optimism, and these fun, decorative doughnuts will put a warm smile on everyone’s face." Boxes of the Springtime Krispy Kreme dozen will be available for a limited time at participating Krispy Kreme locations across the U.S.

Readers across the pond suffering from doughnut-induced FOMO, fret not. Krispy Kreme as a brand might be a symbol of Americana, but the company's UK branch has also been cooking up some exciting new sweets. Last month, the internet discovered that Krispy Kreme UK is now filling some of its doughnuts with a most indulgent ingredient: Nutella. Salted caramel, too.

The Krispy Kreme Nutty Chocolatta, a chocolate hazelnut-filled pastry, is described on the brand's website as "Filled with pure Nutella hazelnut spread, dipped in chocolate flavour coating and topped with white chocolate flavour and hazelnuts." So, not only do you get an explosion of smooth, creamy Nutella flavor when you bite into the doughnut, you get a nice little crunch from the sprinkle of hazelnuts on top, complemented by a thin layer of white chocolate. It sounds more like a fancy dessert you'd get in a fine restaurant than a breakfast pastry you eat as you run to catch a train. The Salted Caramel-Filled Doughnut is a perfect example of the "less is more" mentality. It is described purely as the "signature Original Glazed ring filled with salted caramel."

Whether you're near or far, there is a doughnut for you to enjoy. But if you want one you can only get through the spring season, make it a dozen.