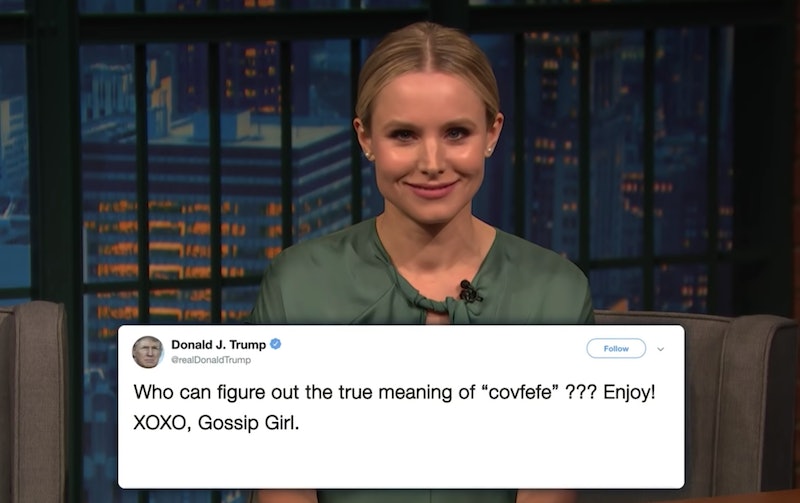 Hey, Gossip Girl fans, Bustle here, your one and only source for celebrity and entertainment news. Have you heard? During a Wednesday appearance on Late Night With Seth Meyers, Kristen Bell read Donald Trump's tweets as Gossip Girl. Yes, you read that correctly and it's as amazing as it sounds. She did it so well, too, that you'll want to hear The Good Place star read more of Trump's tweets.

For those unaware, throughout Gossip Girl's six seasons, Bell was the show's narrator. She only ever appeared onscreen in one episode, the series finale, in a brief cameo where she actually played herself. That said, Bell was perfect as the storyteller. Her voice was so captivating, and Bell had a special way of updating viewers as the narrator about their favorite Upper East Siders and Lonely Boy. It's hard to imagine hearing anyone else's voice, because Bell was that good. Well, she also proved on Late Night that she can flawlessly read Trump's tweets as Gossip Girl.

"We feel as though a lot of Donald Trump's tweets feel very gossipy," Meyers told Bell on Wednesday. "We've asked if you wouldn't mind reading a few of them with the classic Gossip Girl sendoff."

To that, Bell replied, "Seth, I am honored."

The first Trump tweet she read was from Aug. 28, where he posted, "Ex-NSA contractor to spend 63 months in jail over 'classified' information. Gee, this is 'small potatoes' compared to what Hillary Clinton did! So unfair Jeff, Double Standard."

Initially, Trump tweeted last May, "Despite the constant press covfefe." That's all he wrote, which, of course, caught the attention of many. It seemed like he was trying to type the word "coverage," but that didn't happen. His tweet made headlines and caused quite the reaction on social media. Then, following his tweet snafu, Trump seemed to joke about "covfefe" by asking Twitter to decipher what he really meant. And now here is Bell reading the tweet as Gossip Girl.

After the first two tweets, Bell said to Meyers, "These do sound like the things that were written on the show."

She then read her last and final Trump tweet he posted on Aug. 27, 2014. Before showcasing her talent, Meyers said to her, "This is just, like, a personal thing for me, as a Gossip Girl fan, just to hear my voice in your voice will be an honor."

The Trump tweet Meyers referred to was one where he criticized the former Saturday Night Live star's Emmy-hosting duties in 2014. Trump wrote, in addition to sharing a link from Breitbart reporting about poor Emmy ratings, "Congratulations to @sethmeyers on 'Emmy's Rating Tumble' Just as I predicted, Seth bombed!"

It's definitely not the nicest tweet, but Bell made it better. Like she did with the first two tweets, she added her signature catchphrase from The CW series at the end: "XOXO, Gossip Girl." Perfection.

Who knew Bell reading Trump's tweets as Gossip Girl would be so entertaining? She really is the best. You know you love her. XOXO.

More like this
Courteney Cox & Jennifer Aniston’s Latest 'Friends' Revival Is Everything
By Darshita Goyal
The Try Guys Cheating Scandal, Explained
By Grace Wehniainen
Dixie D’Amelio & Noah Beck “Love Each Other” Despite Breakup Rumors
By Julia Emmanuele, Jordyn Tilchen and Grace Wehniainen
Victoria Beckham Loves Teasing David About His “Sticky” New Hobby
By Sam Ramsden
Get Even More From Bustle — Sign Up For The Newsletter