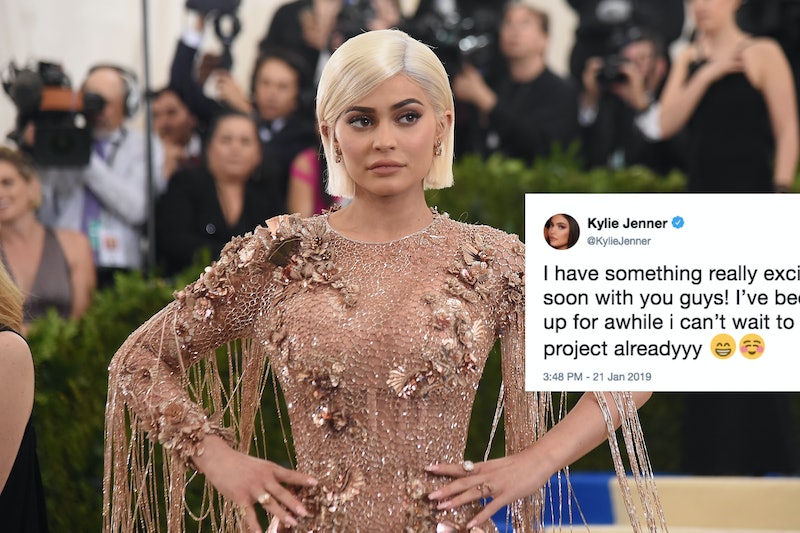 Could a sibling for little Stormi be on the way? Maybe. Eventually. Not right now, though. With one swift and straightforward tweet, Kylie Jenner shut down baby rumors on Jan. 21, as pointed out by People. The speculation stemmed from something Jenner had tweeted earlier that same day, wherein she teased fans about a brand new, super mysterious project.

OK, so it's not *that* mysterious. Jenner at least gave fans a little bit of information to work with in her tweets. Not a lot, but it's definitely better than nothing, right? "I have something really exciting i get to share soon with you guys!" the 21-year-old tweeted. "I’ve been cooking this up for awhile i can’t wait to share my new project alreadyyy," she wrote, followed by two very happy smiley face emojis.

It's not hard to see why some fans jumped to the conclusion that Jenner was pregnant, based on the way her tweet was worded. She said she's been "cooking" something up for "a while," which would totally be applicable if she had a little bun in the oven. But was it a little bit of a reach to assume she was pregnant? Mmm ... perhaps. Jenner shut that assumption down in a hurry.

In the comments of Jenner's tweet, one fan just straight-up asked her if she was pregnant. (Actually, a lot of fans asked Jenner if she was pregnant, but one, in particular, caught her attention.) The fan's question was followed by a smirking emoji and teeth-gritting emoji. "Nooo lol," Jenner emphatically replied.

On Jan. 18, a source told People that Jenner and Travis Scott "want another baby," so a pregnancy announcement wouldn't exactly have been out of left field. "Travis has been adjusting his work schedule so he can spend as much time [as possible] with Kylie and Stormi. There will definitely be another baby sooner rather than later," the source claimed.

"Sooner" definitely doesn't mean now. Jenner said so herself. There's still the matter of the somewhat mysterious project, though. One fan asked, "is it related to kylie cosmetics?" Hey, that's a solid guess right there. An incorrect guess, but still. "no," Jenner replied, followed by a few emojis with their tongues out. "Have you partnered with anyone?" another fan inquired. "Noo," Jenner stated plainly. "Is it a song?!!!" a third fan asked, to which Jenner replied "Nooo hah."

Hmm ... so ... if it's not related to Kylie Cosmetics, and it's not a song or a new sibling for Stormi, then what is it? For now, that remains unclear. Some fans have thrown out a few more pretty good guesses in the comments of Jenner's tweet.

"life of kylie season 2 plz & thank u," one fan requested. The fate of Jenner's spin-off show has never been announced, so that could be it. "It's a cookbook," another fan guessed. Now that would be interesting. Plus, she did say she was "cooking" something up. "A baby clothing line?" a third fan asked, which would totally make sense because Stormi, duh.

Unfortunately, Jenner has yet to drop any more hints about what her new project will be or when it's coming out. In the meantime, fans will just have to keep their eyes on her social media pages and hope for some sneaky little updates.