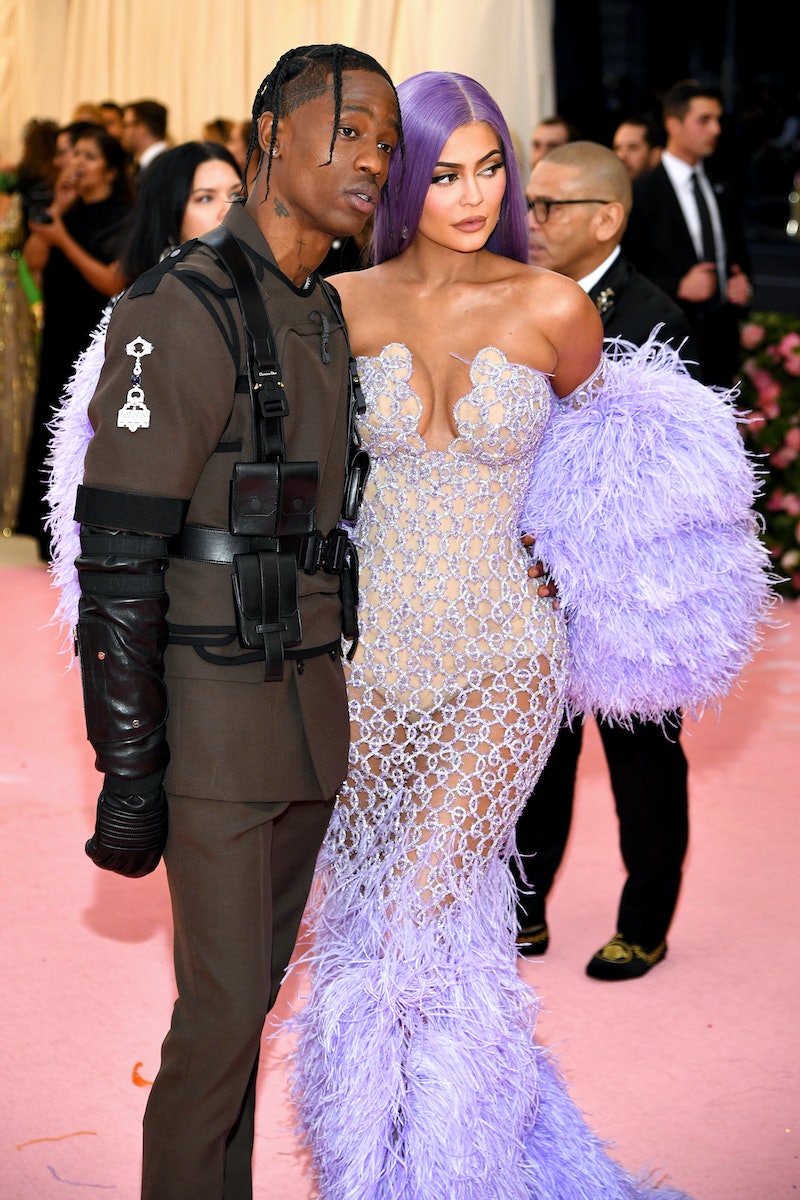 More than two years (and one baby) later, this couple is still going strong. On Sunday, Kylie Jenner shared a new photo with Travis Scott on Instagram, along with a caption about their relationship lasting forever. And not only is the photo cute, but it's also really sweet to see this expression of love from a couple who usually keeps their relationship so private — as private as a relationship between a rapper and a reality star can be, anyway.

In the picture, Jenner and Scott are standing in what appears to be a parking garage as he puts his arms around her. "Partners in crime 4 evaaa," Jenner captioned the photo, adding a few emojis for good measure.

Given that Scott and Jenner have been through a lot together since they first started dating, including keeping her pregnancy with Stormi a secret until after she was born and then tackling raising a newborn for the first time, it might be safe to say that Jenner's right about this one. They may just end up being partners in crime forever — and a lot of that is due to the sweet friendship that they seem to share above all else.

Jenner also posted other photos of herself from Sunday night on Instagram, and it makes sense — that pink blazer demands to be shown off. Of course, her other photos were taken in the bathroom, and honestly, who can't relate to a photoshoot in a public restroom when you're all dressed to go out?

Although Scott isn't exactly making regular appearances on Keeping Up With The Kardashians and Jenner's posts about him are few and far between — she's more often sharing shots with her friends, Stormi, or keeping her posts about Kylie Cosmetics and her new line, Kylie Skin — when she does share glimpses into her relationship, it's always worth the wait.

For example? Their family superhero costumes, of course, which included "Captain Lip Kit" and the "Iron Flame." It seems like these two always have so much fun together, and it's even better when they share those moments with their millions of followers.

And when she wished Scott a happy birthday back in April, she also shared her feelings about the future — including possibly expanding their family and making Stormi a big sister someday. At the time, she wrote:

"watching you evolve into the partner, friend, son, and father you are today has been so fulfilling. my real life bestie & hubby all wrapped into one. i love you and I’m so so proud of you. happy happy birthday. let’s f*ck around and have another baby."

Scott and Jenner have always made a pretty solid couple, so it wouldn't be surprising at all if her prediction about them staying together forever is correct. But no matter what happens, Stormi is a lucky girl to have parents who love her (and each other) so much, and hopefully, the entire family will keep taking fans along for the ride.

More like this
Kylie Jenner Clarified How To Pronounce Her Son's New Name
By Jake Viswanath
Looking Back At Kylie Jenner's Best Fashion Week Looks
By Allie Fasanella
Kylie Jenner Wore A Stunning Corset Dress For Paris Couture Week
By Dominique Norman
The Biggest Fashion Moments Of Paris Couture Week 2023
By Dominique Norman
Get Even More From Bustle — Sign Up For The Newsletter
From hair trends to relationship advice, our daily newsletter has everything you need to sound like a person who’s on TikTok, even if you aren’t.