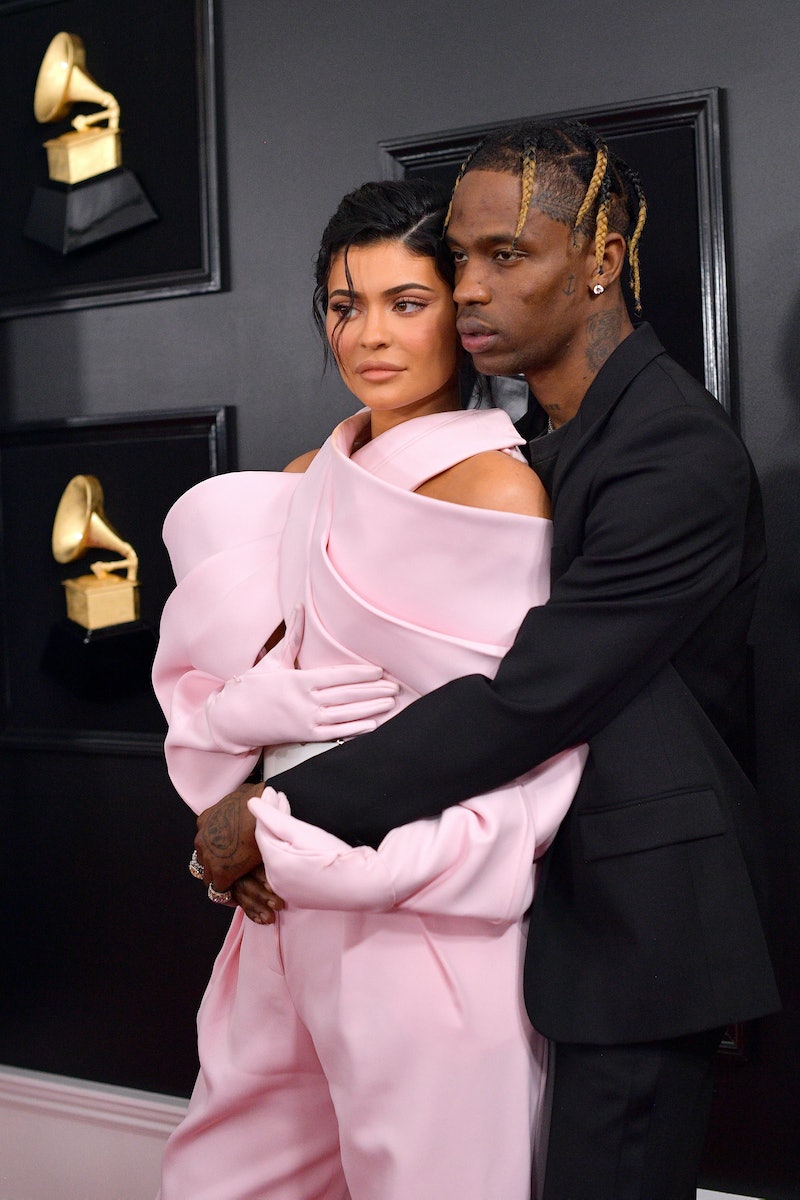 Coachella may have wrapped up for the year, but one couple made the most of the final day. On Easter Sunday, April 21, Kylie Jenner and Travis Scott attended Kanye West's Sunday Service at Coachella, documenting the event on Instagram for their millions of followers. Jenner and Scott's Easter 2019 photos show these two had so much fun at the music festival, and their relationship appears to be stronger than ever.

In one of the pictures, the Astroworld rapper wrapped an arm around Jenner and appeared to be whispering in her ear. The post wasn't the only PDA the couple shared on social media over the weekend, though. Jenner also shared a sweet photo smooching Scott on her Instagram Story, where they're both enjoying the desert sunshine in Indio, California.

As fans likely already know, Jenner and Scott's fashion has been a highlight both weekends of Coachella, and the two once again chose noteworthy outfits for Kanye's performance. Jenner adorned a long braid with seashells and several crosses, while Scott wore a simple white tee with a black button down over it. Jenner shared a closeup of the hair on Instagram and can be seen holding hands with Scott during the video as well.

Photos and videos from the service show these two couldn't stop cuddling, and Jenner captioned the one photo on Instagram, "tell me a secret bae #sundayservice." Scott also posted the same picture on his own account, writing, "I brought the snow 2 da desert" with a cactus emoji.

The music festival has a special significance for the couple. In 2017, Jenner and Scott first sparked romance rumors at Coachella, according to Us Weekly. The two stars were spotted at the event together in 2018 as well, just months after their daughter Stormi was born, according to Seventeen.

Coachella isn't the only time Scott and Jenner have posted relationship updates on social media in recent weeks. On Saturday, Scott shared a picture wearing Game of Thrones attire on Instagram, and it included a special message for his girlfriend. He wrote:

Son of lord Jacques B Webster the 1st

Husband of the Goddess K

Protector of the Seven Kingdoms

Jenner commented on the post, and it's clear she was on board for this medieval look. She wrote, "Oh Lord Webster !!" Later, she added, "Protect my realm."

On April 13, Jenner posted a photo kissing the rapper on Instagram before arriving for the first Coachella weekend. The picture was captioned with heart, butterfly, and star emojis. Earlier in the month, Jenner posted a vacation photo with Scott, and both stars can be seen cuddling in the ocean. She captioned the picture, "baecation."

Despite breakup rumors, Jenner and Scott have been inseparable as of late. In March, the couple was reportedly fighting amid rumors of infidelity, according to Us Weekly. However, both stars were quick shut down cheating and split rumors. In February, reps for Scott vehemently denied the report, according to E! News. The couple certainly seem to be going strong since, and Scott and Jenner hosted Stormi's first birthday party together in February,

The music festival has a special place in the timeline of Jenner and Scott's relationship, and these two did not let the two weekends go to waste. Given how much love the couple have been sharing online lately, fans can likely look forward to more updates on social media soon.