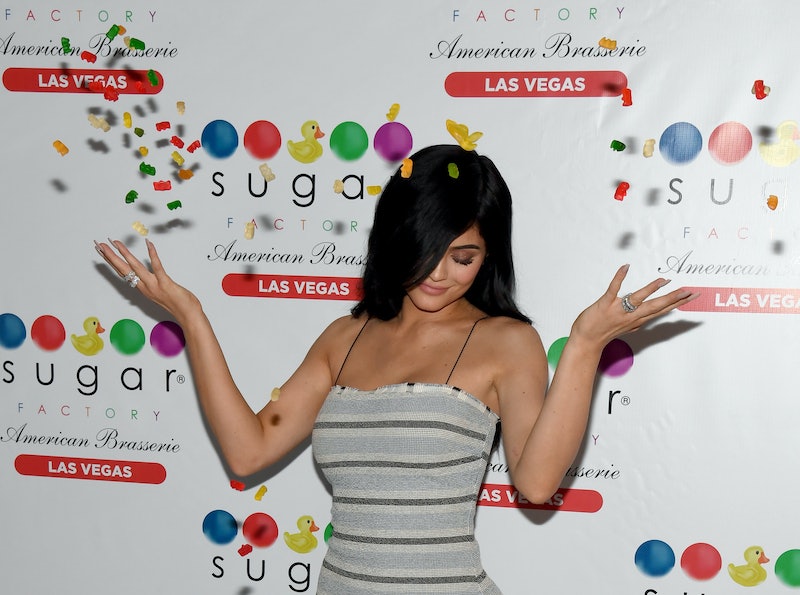 Looks like the upcoming holiday is already shaping up to be totally egg-cellent for one famous family. After posting some new photos to her Instagram Story, it's pretty clear that Kylie Jenner is super excited about Stormi's second Easter. So excited, in fact, that it looks like she's gotten everything all set up several days in advance. You might even said that her Easter preparations are ... hopping right along.

The Kardashian-Jenner crew loves throwing parties. They tend to go all out, no matter the occasion, and Easter is no exception. Last year's celebration was like, above and beyond, but this year's might be even bigger — judging by what Jenner has accomplished so far, at least.

On April 16 — five whole days before the holiday actually happens — Jenner posted a few pics that show what she's got in store for Stormi's second Easter. The first photo showed a deliciously colorful array of cupcakes, and — fair warning — they're going to make you want something sweet.

Jenner had cupcakes with blue icing, pink icing, and cream-colored icing, all of which were topped with rainbow sprinkles. There's a solo cupcake with a cherry in the middle, and at least three yellow cupcakes that look like little chickadees. They're really cute. "i can't wait for stormis 2nd Easter," she captioned the shot, followed by the chick in an egg emoji.

The second photo Jenner shared showed a white, porcelain bowl with a bunny hanging over the rim, filled to the top with Hershey Kisses. Placed beside the bowl was an incredibly adorable bunny-shaped bag, complete with a pink fluffy nose and "Stormi" stitched across the front. There also appears to be yet another stuffed bunny *inside* the bunny bag, and resisting the urge to make a joke about rabbits multiplying has never been harder.

Now, none of this is over-the top-or anything ... so far. Surely, this is just the beginning, though. Did you see the pics from the Kardashian-Jenner's Easter party last year? If Jenner's done this much, this far in advance, it's safe to assume that there's more to come.

In 2018, the Kardashian-Jenner's Easter celebration was one for the books. First of all, one of Kris Jenner's friends sent them a 10-foot-tall bunny that was made entirely of flowers. Ten. Feet. Tall. Do we think that thing terrified or delighted the kids? It's cool, but it's also ... kind of menacing?

Anyway, the rest of their decorations were just straight-up lovely. Tons of pink tulips, colored eggs, a beautiful assortment of sweet treats. Oh, and there was an Easter egg hunt, of course — Kardashian-Jenner-style. All the eggs were gold, and there was cash money inside them.

It's nice that the Kardashian-Jenners have figured out how to throw cool parties that are fun for them and fun for their kids, too. Regardless of whether or not Kylie ends up doing more than what she's already done for Stormi's second Easter, though, they'll undoubtedly have a great day just by spending time with their family.