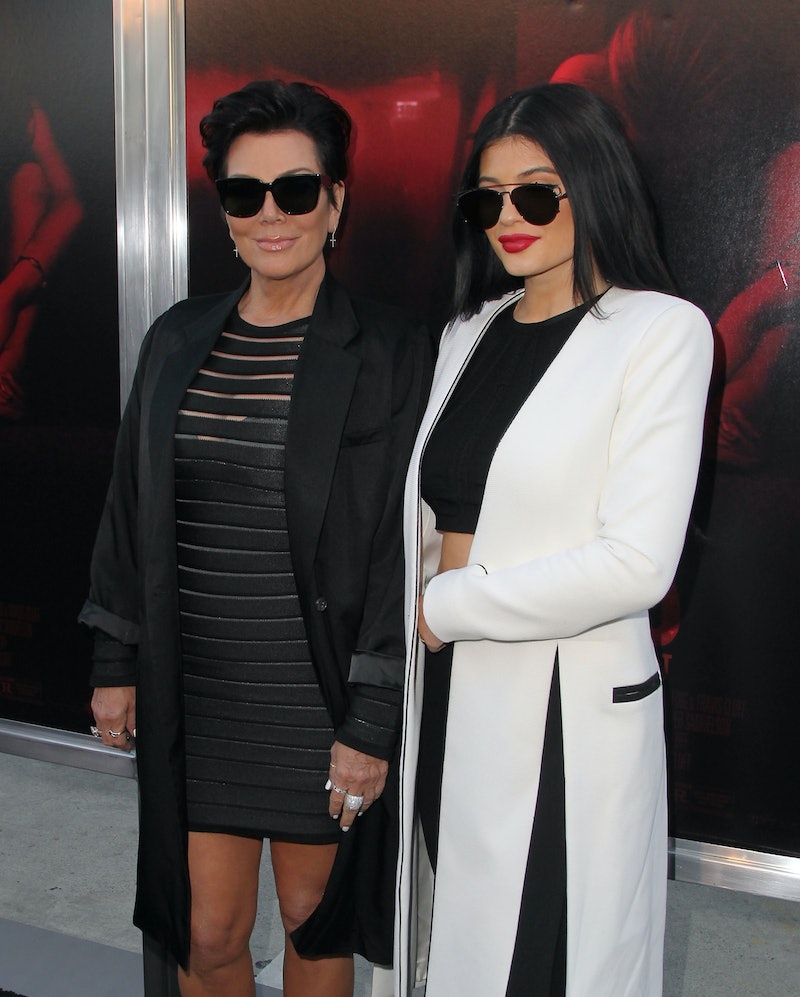 Kylie Jenner and Travis Scott's daughter Stormi Webster just made her magazine debut in a very major way. No, she didn't pose for a solo shoot like her big cousin North West did in February. However, Kylie, Kris Jenner, and Stormi posed for the cover of Harper's Bazaar Arabia's July/August issue together.

Kylie shared the photo featuring the three generations of women in a Monday, July 1 Instagram post. In the caption, the makeup mogul wrote, "Here’s to STRONG WOMEN! May we know them, may we be them, may we raise them." Kris also posted the magazine cover, along with some other photos from the shoot, and wrote, "Thank you so much @harpersbazaararabia!! Such an honor to be on the cover of the July/August issue... three generations."

As epic as this cover is, it actually wasn't even planned in advance. According to the Harper's Bazaar article, Kylie just happened to whip out one of Stormi's leopard print dresses that perfectly coordinated with Kris and Kylie's looks for the shoot. A mother's intuition is always right, especially in this family. Could this photo shoot be the start of Kylie calling the shots as Stormi's momager? It just might be.

Aside from the family's close friends, fans showed love for the Harper's Bazaar cover on Twitter.

The picture is such a great way to capture this moment in time, but it's the cover story that truly highlights the strength of Kris and Kylie's mother/daughter bond and its effect on Kylie's relationship with Stormi. During the interview, Kylie shared,

"When I became a mother, my perspective on life completely changed, and so did how I look at my own mum and appreciate all the things that she’s done for me. Now I can understand the way that she feels about me, the way that she loves me, and how strong her love is for all her kids, because of how obsessed I am with Stormi."

And right on cue, Kris interjected, "I’m obsessed with you, Kylie!" This prompted Kylie to admit, "I know. I understand that now." And it all comes full circle.

Nevertheless, life is constantly moving forward, especially for the famous family. Kris told the magazine, "We’ve always been very connected emotionally and spiritually and have this incredibly strong bond." Kylie has grown as a businesswoman and she's become a mother herself, a switch in dynamics that just makes sense. Kris went on to explain,

"I think as we both get older, our relationship shifts a bit. And for me, I just want her to know that I’m always here to guide her and help her with whatever she needs, rather than it always being, you know, the way it used to be back in the day. Our relationship changes every few years."

The mother/daughter closeness is a good thing for both their family and their businesses. Kris remarked, "Kylie and I have a bond that we are very blessed with and we really make the best out of every single day." This is something that many mother/daughter pairs can relate to (minus the whole making billions of dollars thing).

There's no doubt that Kris and Kylie's strong bond has played a major role in Kylie's successful career. Time will tell if Kylie takes a similar role in Stormi's life. However, she did manage to get the 1-year-old on the cover of a major magazine with zero negotiations, so clearly Kylie's foray into the momager life is off to a great start. As Kris famously said, "You're doing amazing, sweetie."

More like this
Kylie Jenner Clarified How To Pronounce Her Son's New Name
By Jake Viswanath
Kim Kardashian & Kylie Jenner Squabble Over Skims On Instagram
By Alyssa Lapid
Kylie Jenner Wore A Stunning Corset Dress For Paris Couture Week
By Dominique Norman
Andy Cohen Apologized To Larsa Pippen After A 'RHOM' Season 5 Reunion Dust-Up
By Brad Witter
Get Even More From Bustle — Sign Up For The Newsletter
From hair trends to relationship advice, our daily newsletter has everything you need to sound like a person who’s on TikTok, even if you aren’t.